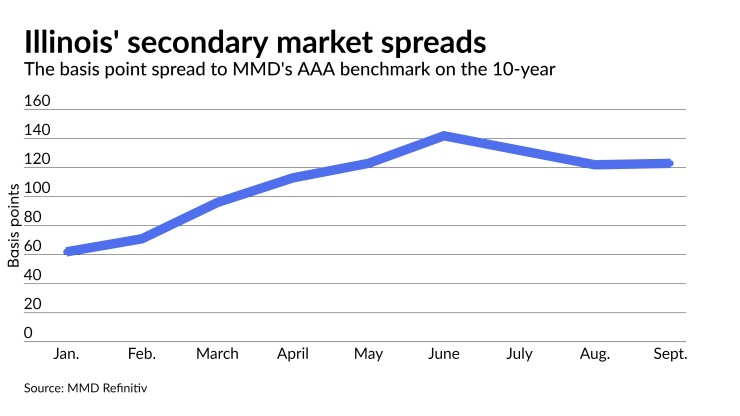 With a round of rating upgrades in hand, Illinois will hold an in-person and remote meeting with investors later this month to promote its fiscal progress ahead of its next bond sale.

“The state of Illinois intends to hold an investor meeting on Wednesday, September 21st, in advance of an anticipated $700 million competitive general obligation bond sale,” the Governor’s Office of Management and Budget said in a statement. “State officials will present information and answer questions from participants.”

The competitive sale is tentatively planned for the week of Sept. 26th, although the final size and timing of the sale are subject to market conditions.

The state will meet with investors Sept. 21 at 1:30 p.m. CDT at the law offices of Chapman and Cutler LLP, 320 S. Canal Street, Chicago, with a remote participation option via Zoom.

In-person participation is limited and attendees will need to provide proof of COVID-19 vaccination. Reservations are available on a state site.

Pritzker and his finance team last held an investor meeting where they fielded questions in September 2019, which served as the governor’s introduction to the buy side after taking office that January. Pritzker is seeking a second term and faces state Rep. Darren Bailey, R-Xenia, in the November general election.

Officials will promote a round of upgrades in the spring that rewarded the state for making headway on chronic strains that were made worse by a two-year budget impasse that dragged the state’s ratings to the edge of junk.

S&P Global Ratings in May lifted the general obligation rating to BBB-plus from BBB and sales tax backed Build Illinois bonds rose to A-minus from BBB-plus, a rating linked off the state GO. Both have a stable outlook. The state has about $25 billion of GO debt.

Also in the spring, Moody’s Investors Service raised the state’s rating to Baa1 from Baa2 in April and Fitch Ratings upgraded the state to BBB-plus from BBB-minus. All assign a stable outlook. Moody’s and S&P first handed the state upgrades last year, reversing more than a decade of rating deterioration.

The latest upgrades followed Pritzker’s signing of a $46.5 billion fiscal 2023 budget and revisions to the fiscal 2022 budget that spend down a multi-billion-dollar surplus. The state’s used surpluses from swelling tax collections to bolster depleted reserves to $1 billion, pay down $2 billion in bills and other debt so that payables are now on time, and direct $500 million to supplemental pension payments.

Surpluses also went toward $1.8 billion of one-time tax relief with the exception of $100 million for a permanent increase in the earned income tax credit. The state has directed most of its $8 billion of federal COVID-19 American Rescue Plan Act relief to one-time uses including $2.7 billion to pay down a $4.5 billion unemployment trust fund loan from the federal government. The state has not yet said how the remainder of the unemployment loan will be paid off.

A $139.9 billion unfunded pension tab for a system just 42.4% funded remains the most burdensome strain on the rating. While the budget is balanced on current-year, cash basis, S&P does not view it as structurally balanced because statutory pension contributions fall about $4 billion short of an actuarial one. Illinois remains the lowest-rated state.

The upgrades didn’t reverse a widening of spreads that Illinois paper experienced in the secondary bond market since early this year as market turmoil rose amid fund outflows, inflation, a risk aversion, and Federal Reserve rate hikes although they have narrowed of late.

The state last sold GOs in May with the deal’s 10-year maturities landing at a 138 basis point spread to the Municipal Market Data’s AAA benchmark. The state opened the year with its 10-year spread at a 62 bp spread, a level not seen since before its 2017 budget impasse.