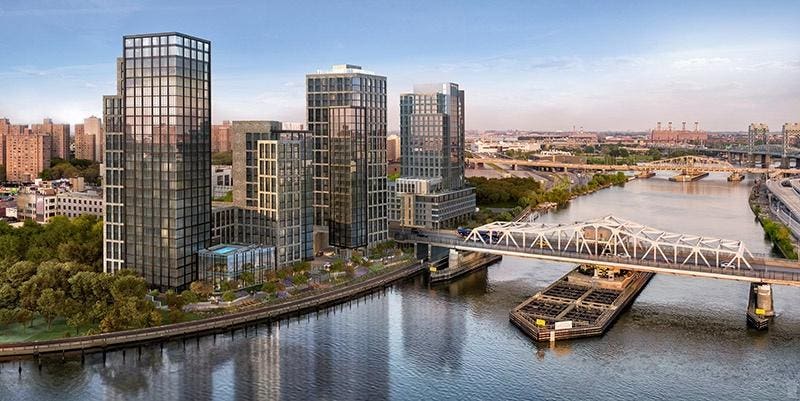 The Bronx saw record dollar volume and the second most transactions ever recorded with $1.54 billion investment sales across 191 transactions, according to research produced by Ariel Property Advisors. Multifamily sales accounted for nearly half the transactions, or $756 million, which is the highest dollar volume since 1H 2016 when $960 million in multifamily buildings traded.

The largest transaction in the first half of the year was the sale of a multifamily portfolio of two free market former Mitchell Lama buildings at 2103 Honeywell Avenue in West Farms and 2001 Story Avenue in Unionport for $169 million to a private investment group.

“The Bronx is attracting an influx of capital because it’s one of the first boroughs in New York City where multifamily owners have adjusted their prices to accommodate the high interest rate environment,” said Victor Sozio, Founding Partner, Ariel Property Advisors. “As a result, the borough’s assets offer an attractive spread between cap rates and borrowing costs.”

Since the Housing Stability and Tenant Protection Act (HSPTA) passed in 2019, the investor profile for multifamily assets in the Bronx has shifted. “High net worth individuals and Family Office investors with patient money are now the leading buyers of traditional rent stabilized buildings,” Sozio said. “They have a longer term horizon than institutional investors, which answer to investment committees and are more sensitive to government regulations.”

Sozio said institutional investors today gravitate to affordable portfolios in the Bronx, which are governed by a combination of city, state and federal programs, including Project Based Section 8 with Housing Assistance Program (HAP) contracts.

For example, at the end of last year Ariel arranged the $350 million sale of the Bronx 2K affordable housing portfolio comprised of 48 buildings with 1,904 residential units in the Morrisania, Crotona Park, Longwood and Tremont neighborhoods to a joint venture between Fairstead and Invesco. Ariel also arranged the January 2022 sale of a 13-building affordable housing (LIHTC) portfolio of buildings in the Bronx, Brooklyn and Manhattan to Red Stone Equity Partners, Community Preservation Corporation, The Community Development Trust, Monadnock Development, and the Black Developers Network Triboro.

In addition to affordable multifamily portfolios, institutional investors are making plays for industrial assets in the Bronx where vacancy rates remain low. In 1H 2022, there were 18 industrial transactions across $301 million in the industrial sector.

Blackstone’s acquisition of two industrial buildings on Commerce Avenue for $81.75 million, or $545/SF, was the largest industrial transaction and further supports the flood of institutional money coming into the industrial sector of the Bronx. In addition, Brookfield and Storage Post both transacted on self-storage buildings for $64 million and $48.2 million, respectively.

Another bright spot in the Bronx in the first half of the year was the commercial market, which saw $148 million in sales, a 12% increase from the second half of 2021 and the highest dollar volume since 2H 2016.

Office properties were the least transactional asset class in the Bronx in the first sixth months of the year, with around $30 million trading across five properties. The borough’s limited supply of prime office product rather than a lack of demand is driving the dearth of activity in this sector.

Ariel, for example, is marketing a rare five-story, 30,000 square foot elevator loft office building at 111 Bruckner Boulevard in the heart of Mott Haven, which is generating interest from investors and owner-users. The property recently underwent a substantial gut renovation including brand new windows, sprinkler system, plumbing and electrical. In addition, its flexible (M1-2/R6A, MX-1) zoning is a plus in a neighborhood that has been a hotbed for both public and private investment.

From 2021 into the first quarter of 2022, developers rushed to close deals in the Bronx before the Affordable NY/421a tax exemption sunset on June 15th. More than $231 million in properties sold in the first half of 2022 across 44 transactions.

In January, Ariel arranged one of the largest development trades in 1H 2022, a $35 million ground lease at 138 Bruckner Boulevard where JCS Realty is planning a 12-story, 447-unit mixed-use building on the site of the former Zaro’s Bakery warehouse in Mott Haven.

The Bronx continues to benefit from rezonings, which have enabled the construction of new housing in former industrial districts. Since the approval of the Special Harlem River Waterfront District Expansion in December 2017, multiple residential towers have emerged along the Harlem River. Currently, about 20 rental developments with more than 5,000 apartments have been completed or are planned for the Mott Haven neighborhood.

The most visible is Brookfield’s Bankside development, a 1,350-unit residential complex of which 30% of the units will be “income-targeted,” or rented at below-market rents as part of the 421a program. In March, Bankside opened its first units, with residents moving into some of the 458 units available at three towers making up the Third on Bankside property at 2401 Third Ave., which features a pool deck, fitness center, indoor bike storage and in-unit laundry for residents. The second phase, slated to include more than 900 apartments, will rise to 25 stories at 101 Lincoln Avenue.

Last year, RXR Realty broke ground on a 27-story, 200-unit residential tower at 2413 Third Ave that will include 60 units of affordable apartments for middle income households. Additionally, L&M Development Partners is developing 542-units of affordable housing in a 530,000 SF project at 575 Exterior Street, which will include educational community facilities and open space along the Harlem Riverfront.

For additional information about the investment sales market in the Bronx, please refer to the research report The Bronx 2022 Mid-Year Commercial Real Estate Trends.