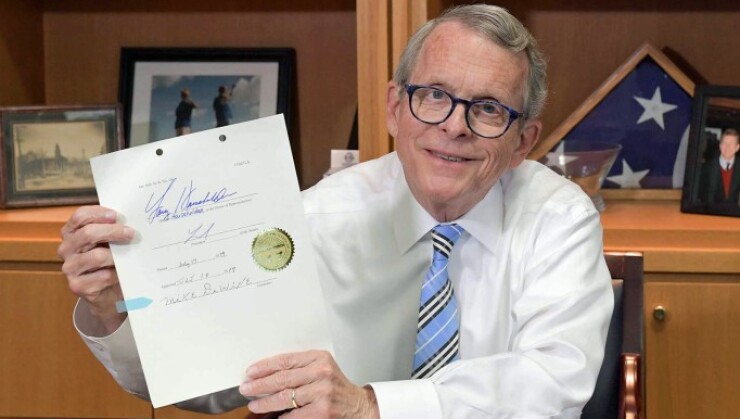 Moody’s Investors Service and S&P Global Ratings rate Ohio one notch below the top mark at Aa1 and AA-plus, respectively, and both assign a stable outlook.

The upgrade “reflects material strengthening of the state’s financial resilience and budget management, particularly over the past two biennia,” Fitch said. “Ohio has achieved a sustained trend of balanced finances over the past decade coupled with more recent growth in fiscal reserves and cash balances. These have materially strengthened Ohio’s gap-closing capacity.”

After past draws on reserves, the state restored its Budget Stabilization Fund during the most recent economic expansion, building it up to $2.7 billion which equates to about 10% of fiscal 2022 state-source general revenue funds. The state did now draw on the reserve in 2020 or 2021 as it managed COVID-19 wounds.

Gov. Mike DeWine’s budget office was expected to release a statement later Thursday on the upgrade.

“In recent years, volatile economic conditions have thrown countless curveballs to state governments across the country. We’ve worked hard to maintain a steady hand and take these challenges in stride,” said Brittany Halpin, spokeswoman for Treasurer Robert Sprague. “This is very welcome news, and the Treasurer’s office is proud to play a role in strengthening the financial health of the Buckeye State.” .

While economic uncertainty lays ahead, Fitch said the state has shown an ability to absorb the effects of economic cyclicality and tax policy changes. The state budgeted for a 4% tax revenue decline in fiscal 2022 due to a round of income tax cuts, but growth came in at 6.4%.

Ohio has carried a AA-plus rating since 2010 when it was raised from AA after a 2009 downgrade. Fitch last affirmed the rating and positive outlook in May ahead of a bond sale and in August, 2021 had revised the outlook to positive.

A failure to maintain fiscal balance and robust reserves when addressing future financial challenges, including absorbing the potential effects of major tax policy revisions and state revenue growth that falls below Fitch’s expectations could drive a future downgrade.

The state managed through the economic toll of the COVID-19 pandemic with a recovery taking root in 2021 like most other states. Ohio has recovered 85% of lost jobs through July but that falls short of the state median of 95%.

Tax collections for fiscal 2022 topped estimates by $2.7 billion, or 10.8%, and were $1.7 billion above the previous year, despite income tax cuts. Ohio revised its biennial budget in 2022, appropriating a portion of the surplus to fund new capital projects and infrastructure upgrades.

The state currently expects revenues for the full biennium that ends June 30, 2023, to exceed the previous budget cycle by a total of $7 billion. The current budget raised education and health and human services spending and included $1 billion in an initiative that earmarks one-time funding for business sectors and communities negatively affected by the pandemic mostly funded with a portion of the state’s $5.4 billion of American Rescue Plan Act federal pandemic relief.

The state has also directed $1.5 billion of its pot of funds to fully repay federal borrowing to cover a deficit in the Ohio’s Unemployment Trust Fund in 2020 due to pandemic-related job losses. “Ohio has not used its ARPA allocation to supplant state revenue or to finance recurring expenditures,” Fitch said.