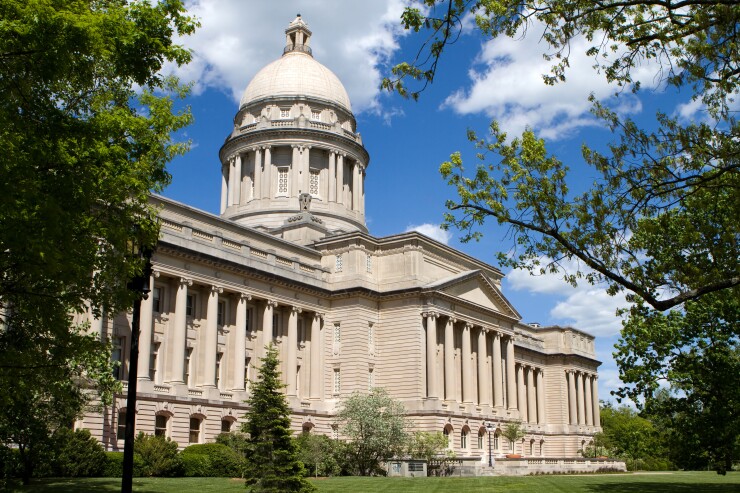 The Commonwealth of Kentucky on Thursday plans final pricing of $233 million of special obligation revenue bonds that will finance renovations across a wide portfolio of state-managed properties.

The bonds will be issued by the Kentucky State Property and Buildings Commission in two tranches, according to the issuer’s online investor “roadshow” presentation, with the $40.2 million taxable Series B bonds maturing through 2028 and the $193 million Series A tax-exempt, with the final maturity set for June 1, 2042.

Retail orders were scheduled Wednesday ahead of Thursday’s final pricing.

Citigroup Global Markets is senior underwriter on a deal team of seven banks.

Fitch Ratingsassigns the bonds its A-plus rating with a positive outlook, one notch below Kentucky’s issuer default rating of AA-minus, citing the deal’s funding structure, which requires biennial approval by the state of the funds needed to cover debt service in a recent ratings report.

According to the terms of the contract, the Property and Buildings Commission intends to meet obligations on the debt with existing rent payments made by agencies currently working from state-managed facilities.

Those rent funds must be appropriated every other year during budget negotiations by the governor and then approved by the state legislature, an appropriation risk reflected in the one-notch distinction between the rating and commonwealth’s issuer default rating.

However, that risk is small, according to Fitch Director Michael D’Arcy, the agency’s primary analyst for Kentucky.

Kentucky rarely issues general obligation debt, he said, and has none outstanding, and instead prefers “this kind of lease revenue bond structure” for its issuances. Capital projects are often drafted years in advance under the arrangement, making it unlikely political discord would threaten the funding backing such projects.

The state has long ensured obligations were met for similar bonds, regardless of who was in charge, according to D’Arcy.

Kentucky has about $2.78 billion of State Property and Buildings commission debt outstanding, according to the investor presentation.

While “the legislature may change their minds about the project or a new administration or majority may come in that is not well disposed toward it,” officials understand that “the credit ratings of all the other lease revenue bonds of the Commonwealth would suffer” if the state backed off of any of its obligations, D’Arcy said.

In April, Fitch revised Kentucky’s credit outlook to positive from stable, citing “the commonwealth’s solid ability to control revenues and expenditures to maintain fiscal balance, a declining reliance on one-time measures, and an elevated but still moderate long-term liability position,” according to a ratings report.

“Significant federal pandemic aid” and strong tax collection seasons in 2021 and 2022 also helped to “smooth a transition to more normal budgetary growth after years of spending restraint,” the report added.

Kentucky is now set to receive $5 billion over a five-year period for infrastructure improvements from the federal Infrastructure Investment and Jobs Act.

The deal’s A1 Moody’s Investors Service rating is notched off Kentucky’s Aa3 issuer rating, with the same stable outlook.

“The rating is one notch lower than the commonwealth’s issuer rating, reflecting the essentiality of the financed projects as well as the moderately strong legal structure, in which the funds pledged to pay the bonds are subject to appropriation,” Moody’s said in its Aug. 24 rating release.

Moody’s has held the issuer rating at Aa3 since 2017, and its outlook for Kentucky at stable since 2014.

“The commonwealth’s stable outlook reflects sufficient tools to manage an economic downturn, including satisfactory liquidity and a recent history of maintaining balanced operations. These two items are key as Kentucky balances elevated long-term liabilities and associated fixed costs,” according to Moody’s.

The state’s ratings have enjoyed a modest recent rebound after facing pressure driven in large part by pension underfunding.

In January, S&P Global Ratings, which was not asked to rate these Property and Building Commission bonds, lifted its outlook to positive from stable on Kentucky’s A issuer credit rating and A-minus appropriation-backed ratings.

The agency cited improved risk management practices, including less reliance on one-time items to balance the budget and a higher rainy day fund, and changes to the teachers’ retirement system creating a hybrid plan for new teachers as of 2022 that will provide a mix of defined-benefit and defined contribution retirement plans.

Fitch lifted its rating outlook to stable from negative in 2021, before moving it to positive in May.

Kutak Rock is bond counsel on this week’s deal.