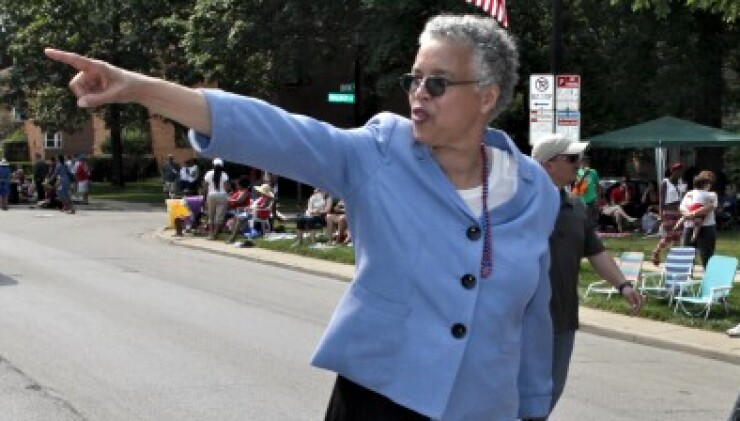 Cook County, Illinois, extended the deadline by one week for eligible local governments to participate in a $300 million borrowing program that provides no-interest loans to manage a months-long delay in second installment property tax collections.

The bridge loan program announced in July will spare suburban taxing bodies from having to issue tax anticipation notes to bridge the gap, with eligibility tied to a local government’s need and their costs to access the capital markets. As many as 500 taxing bodies might qualify.

The county extended the deadline to the end of business Friday and is providing technical support to apply.

“This program has the potential to do a lot of good while providing financial breathing room for local governments experiencing a cash crunch,” County Board President Toni Preckwinkle said. “By extending the deadline, more local governments across Cook County have extra time to access millions of dollars in no interest loans that can cover payroll, pay bills and provide much-needed services to our residents.”

The application window will close on September 9 at 5 p.m., Central time, with funds expected to go out in September. Additional information and documents are available at cookcountyil.gov/bridgefund.

The county is working with PNC Bank to provide a line of credit to fund the bridge loan program. County interim Chief Financial Officer Lawrence Wilson’s office will manage the applications and distribution of loans. The administration will seek board approval this month for an up to $500 million of borrowing for the program supported by its own credit.

The county will prioritize loans based on an equity model established to distribute federal pandemic relief in the CARES Act: state school funding metrics, three-year average collection rates, and the need to fund vital services.

Out-of-pocket administrative and interest expenses for a $300 million program total $5 million, which would rise to $8 million if the county taps all of the $500 million authorization. Loans will be paid back directly to the county as tax revenues are distributed.

The county currently carries a general obligation rating of AA-minus from Fitch Ratings, an A2 from Moody’s Investor’s Service and an A-plus from S&P Global Ratings. Unrated municipalities are also eligible.

Paper districts, which serve as pass-throughs for tax collections to a third party, are ineligible as are overlapping districts with more than 1/3 of its jurisdiction outside of the county. Chicago-based taxing districts are also not eligible. The minimum loan is $20,000 and maximum would be based on expected payments and days’ cash on hand.

Second installment tax bills are typically due over the summer but won’t go out until later this year. Preckwinkle has blamed the delays on a combination of the COVID-19 pandemic and a major technological upgrade still being completed — staying out of a dispute between two other elected bodies.

What is the economic impact of cryptocurrencies?
What The Rise Of Private Clubs Predicts For The Future Of The Office
Ethereum Merge was ‘executed flawlessly,’ says Starkware co-founder
Putin gives Snowden citizenship, Interpol elicits help in Do Kwon search and FTX US buys Voyager: Hodler’s Digest, Sept. 25-Oct. 1
Top Wall Street analysts name the best stocks to ride a market downcycle