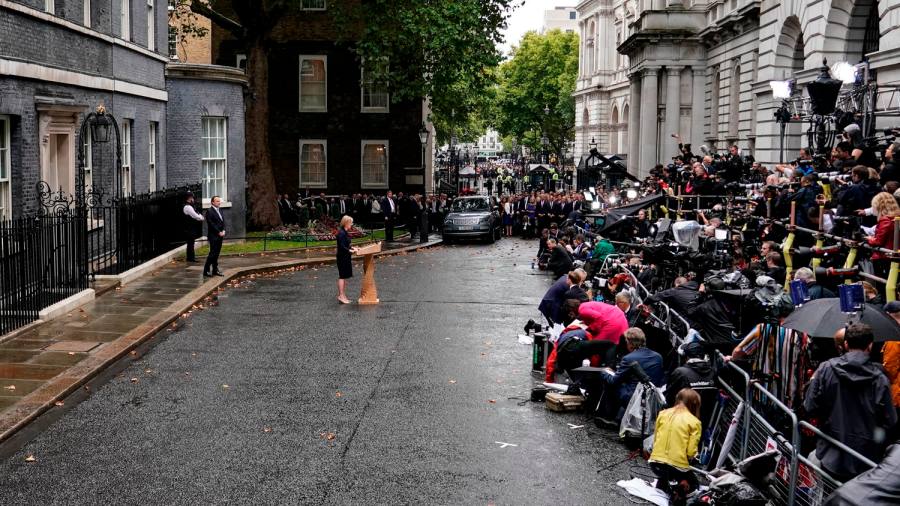 Liz Truss has vowed Britain will “ride out the storm”, as the new UK prime minister began confronting an economic crisis with a massive energy bailout for families and businesses that could cost more than £150bn.

Truss dodged torrential rain outside Downing Street to tell the country that she would create an “aspiration nation”, adding: “As strong as the storm may be, I know that the British people are stronger.”

Within minutes of entering Number 10, Truss set about forming a cabinet and finalising an energy relief package that will set the tone for her premiership and sharply increase government borrowing.

Truss’s allies suggested the household package would cost £90bn, with an estimated £40bn-£60bn for the business element, which is still being finalised, over two years.

The estimated scale of the package is bigger than any single Covid-19 support scheme. Ahmed Farman, an analyst at Jefferies, said it would amount to the “largest welfare programme in the UK’s recent history”.

The package of support was being drawn up by Kwasi Kwarteng, who was appointed chancellor on Tuesday night as Truss began forming her new cabinet.

James Cleverly was named foreign secretary and Suella Braverman home secretary. It is the first time in British history that none of the top four “great offices of state” are held by white men. Thérèse Coffey, a key ally, becomes health secretary and deputy prime minister.

Truss appointed a raft of like-minded rightwing ministers to her cabinet, but ironically her government’s first major act will be to oversee a massive debt-funded intervention in the energy market.

Truss intends to cap household energy bills at about £2,500, compared with the current cap of £1,971, with the estimated cost of about £90bn funded through government borrowing. Consumers will also receive a previously announced one-off payment of £400 to help offset rises.

The cap had previously been scheduled to leap to £3,549 next month, with a projected increase to above £6,000 in 2023. Sustained high gas prices could easily see taxpayer exposure exceed £200bn.

Truss will link the energy package to long-term market reforms and a commitment to increase oil and gas production, along with fracking for shale gas if local communities approve.

The costs to taxpayers of freezing energy prices will be met by government borrowing and will depend on the level of wholesale gas prices, the use of energy and the level of any price freeze.

One person who has held detailed discussions with the Truss camp in recent weeks said the new prime minister wants one big intervention that will protect households for at least 18 months. “Their objectives are to do it once and do it big,” the person said.

Craig Beaumont of the Federation of Small Businesses, said Truss’s plans “looked very promising”, adding: “The scale and reach of this help is going to be absolutely crucial to save hundreds of thousands of small businesses this winter.”

Earlier Truss met the Queen at Balmoral, as the transfer of power from Boris Johnson to Britain’s third female prime minister took place against the backdrop of the Scottish highlands.

Truss, speaking in front of supporters in Downing Street, said she had three priorities, including dealing with the energy crisis, which she said was “caused by Putin’s war” in Ukraine.

Truss also vowed to pursue growth-related policies, including cuts to personal and business taxes, and to address the crisis in the NHS.

Kwarteng is expected to hold a mini-Budget later this month to push through tax cuts, including a £30bn reversal of national insurance and corporation tax rises, that the new PM claims will boost growth.

Sterling has fallen 8 per cent against the dollar over the past three months, reflecting concerns about the UK economy and broad strength in the US currency.

UK sovereign bonds have also sustained intense selling, with the government’s 10-year borrowing costs in the gilt market surging to 3.1 per cent on Tuesday from about 1 per cent at the start of the year.

Earlier in the day, Johnson made a defiant farewell speech outside Number 10. He did not apologise for the series of scandals, including partygate, that led to his downfall. The outgoing prime minister also dropped a classical hint that he might yet make a comeback.

“Like Cincinnatus, I am returning to my plough and will be offering this government nothing but the most fervent support,” he said. Historians pointed out that Cincinnatus later returned to Rome as ruler.