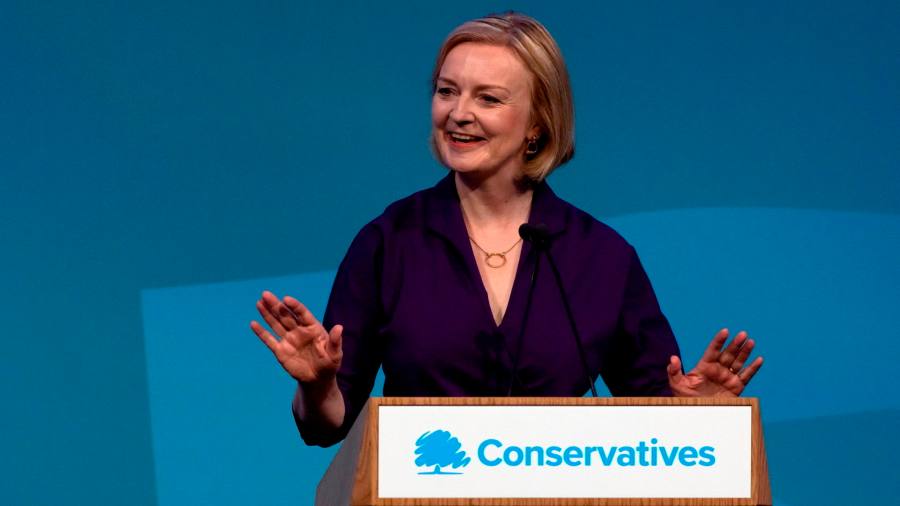 Liz Truss will enter Downing Street on Tuesday after a bruising battle to become the UK’s next prime minister and will finalise a two-year package of energy relief for households and business that could cost up to £100bn.

The foreign secretary beat rival and former chancellor Rishi Sunak in a ballot of Conservative party members by 81,326 votes to 60,399 — a 57-43 margin — after a seven-week contest to succeed Boris Johnson.

Truss will meet the Queen on Tuesday at Balmoral, the monarch’s estate in Scotland, and will immediately return to London to announce her cabinet and address the economic crisis facing the country.

She will become Britain’s 56th prime minister and the fourth Tory occupant of Number 10 in just over six years. She will also become the country’s third female premier after Margaret Thatcher and Theresa May.

Truss is seeking to cap energy prices in a costly market intervention to avoid household misery and business collapse. Average household bills will rise from almost £2,000 to more than £3,500 in October.

Kwasi Kwarteng, who is expected to become Truss’s chancellor, wrote in the Financial Times on Sunday that “decisive action is needed to get families and businesses through this winter and the next”.

Truss’s team said the total package, to be announced within days, would not exceed £100bn but could come close, given the scale of the support needed for households and to protect companies.

With 27.4mn households, freezing gas and electricity bills at the current typical annual cost of £1,971 would cost in the region of £40bn a year, without taking into account business support.

That bill would rise sharply if wholesale gas prices stay at their current level of £5 a therm, 66 per cent higher than the £3 a therm reference value that underpins the £3,549 retail energy price cap from next month.

One option being considered by Truss’s allies is for the government to achieve its objective of protecting businesses and households by capping the wholesale price of gas.

Kwarteng is weighing up whether the massive government intervention in the energy market should be recouped from general taxation or through a future levy on consumer bills. The latter could be politically problematic.

Truss also wants to reform energy markets to drive down bills. She is seeking to persuade nuclear and renewable energy generators to voluntarily take new 15-year contracts at fixed prices well below the current rates that give them profits linked to vastly inflated gas prices.

“I will deliver a bold plan to cut taxes and grow our economy, dealing with people’s energy bills and also the long-term problems we have with energy supply,” she added.

Truss promised to deliver a “great” Conservative election victory in a vote she said would take place in 2024, but polling on Monday illustrated the scale of the challenge.

A snap YouGov poll found that only 14 per cent of Britons thought Truss would make a better prime minister than Johnson. A Survation poll gave the opposition Labour party a 46-29 point lead over the Tories.

The 47-year-old incoming premier, who has served in the cabinet for eight years, has promised a rightwing agenda of tax cuts — largely funded by borrowing — in an attempt to halt Britain sliding into a lengthy recession.

Truss won the party crown after a protracted and acrimonious contest to succeed Johnson, who resigned on July 7 after a cabinet mutiny led by Sunak over his conduct as prime minister.

Truss presented herself as an heir to Thatcher, promising tax cuts and less regulation and insisting that it was wrong to view all economic policy through “the lens of redistribution”.

In foreign policy, she struck a tough position on Russia and vowed to stand up to Brussels in a row over post-Brexit trading arrangements in Northern Ireland.

Truss will announce her new cabinet on Tuesday. Kwarteng will be her chancellor, while Foreign Office minister James Cleverly is expected to be promoted to foreign secretary. Attorney-general Suella Braverman is expected to replace Priti Patel, who quit as home secretary on Monday.

Patel, who was not expected to feature in Truss’s new team, said in her resignation letter it was “vital” that her successor retained the controversial scheme to remove some asylum seekers to Rwanda.

Nadine Dorries, culture secretary and a Truss supporter, announced on Monday night that she was stepping down from the cabinet. Truss had invited her to stay in her team. Ben Elliot, a key ally of Johnson and a contentious party fundraiser, announced that he was quitting as Tory co-chair.

In other key appointments, Jacob Rees-Mogg, a rightwing ally of Johnson, is expected to become business secretary with responsibility for energy policy. Ben Wallace will stay at defence, while Truss’s ally Thérèse Coffey has been tipped to become health secretary.

Iron Condors: 101 What is it and How Does it Make You Money?
Bank of China ex-advisor calls Beijing to reconsider crypto ban
Spanish rehab center adds crypto trading addiction to services list
Stock Market Coaching | Do You Need a Mentor? – Mindsets of a Master Trade Ep 205
Stocks making the biggest moves before the bell: Apple, Alphabet, Amazon, Starbucks and more