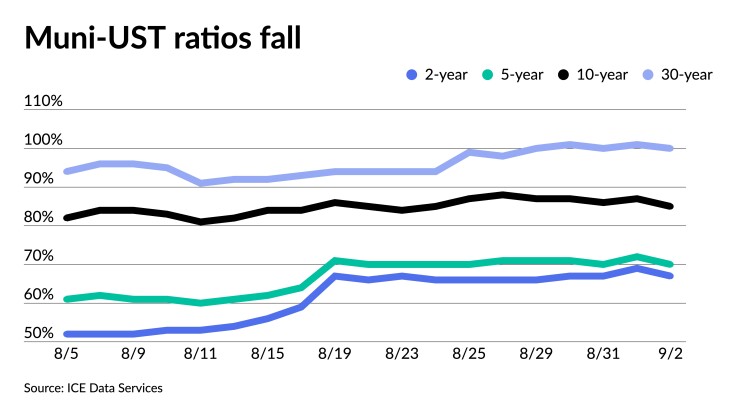 Municipals were steady Friday ahead of a holiday-shortened week where investors will be greeted by two large deals from the states of California and Pennsylvania in an otherwise lackluster new-issue calendar. U.S. Treasuries rallied on the front end of the curve.

Since the Federal Reserve “reinforced” its “focus on inflation … rates dramatically sold off, but investors have also started accounting for a much more aggressive path of rate hikes, and a 75 bp move in September has largely been priced in, especially after today’s payrolls,” according to Barclays PLC.

Over the past several weeks Treasury rates have moved “30-40 bp higher, and munis have followed but have actually underperformed in the selloff, with the front- and the long-end of the yield curves faring the worst,” Barclays strategists Mikhail Foux, Clare Pickering and Mayur Patel said.

They noted it was “one of those rare instances when barbelling portfolios did not work, as the ten-year part of the curve actually performed best.”

Demand for munis have seen some paring off, with triple-As faring better than double- and single-As, said Sandeep Rao, a quantitative analyst and researcher at Leverage Shares.

Muni issuance year-to-date is down, he noted. “They’re not really getting squeezed in terms of demand. And if there’s a decent rate hike into the Treasury market, there will be more competition for municipals and demand will fall further.”

Municipalities are issuing less debt because of recession, lower tax revenues, and the possibility of tax concessions, he said, so it makes sense for munis to “not be so hot.”

However, he remains mildly optimistic triple-As will pick up again.

Spreads, he continued, will worsen, though that’s expected and “already baked into the supply-demand cycle.”

Additionally, market fundamentals will continue to be weak, with munis under pressure as they compete with USTs.

September to October “is rarely a strong performance period for munis,” the Barclays strategists said.

“Over the past decade, muni IG indices had an average excess return of zero in September and 0.2% in October, with a number of years when tax-exempts actually underperformed Treasuries,” they noted.

Furthermore, supply usually picks up in the fall, and redemptions drop. They estimate that “September redemptions will be at the lowest monthly level this year, so we will likely see several months of positive net supply, coupled with likely rate volatility that might cause further fund outflows like we saw in the past several weeks.”

They said market technicals will not “be supportive in the next two months, and tax-exempts might cheapen further versus Treasuries.” Despite this, they are “more comfortable getting longer in October, especially if muni levels become even more attractive.”

“In our base case, we still expect to see a year-end rally as investors start positioning for 2023,” they said.

Smaller calendar ticks up
Investors will be greeted Tuesday with a larger new-issue calendar, estimated at $6.087 billion, up from total sales of $5.551 billion in the week of Aug. 29.

There are $4.539 billion of negotiated deals on tap and $1.549 billion on the competitive calendar.

The negotiated calendar is led by the $2.5 billion of GOs from the state of California, followed by $406 million of electric system revenue bonds from the Omaha Public Power District, Nebraska, and $225 million of sustainability improvement refunding bonds from the Harris County Flood Control District, Texas.

“The August Jobs report was a very positive one for the economy, with continued momentum in employment gains but also a healthy increase in the labor force and relatively mild increases in wages,” said David Kelly, chief global strategist at J.P. Morgan Asset Management.

It provides “more runway for a soft landing,” he said. Also, while the futures market was still pricing in a 75-basis-point rate hike this month, the probability dipped to 68% from 76%, he noted.

“We still believe that the Fed will raise rates by 0.75% at their September meeting,” Kelly said. “However, signs of extra labor market slack in this morning’s report, combined with further good news on falling gasoline prices,” makes it possible for a soft landing.

But nothing has been decided, according to a Morgan Stanley report written by a group led by Chief U.S. Economist Ellen Zentner. “The solid increase in jobs and the uptick in the unemployment rate together keep the September FOMC decision in the balance.”

While some at the Fed would like a half-point increase, they said, “the incoming data flow also provides arguments for another 75 bp hike. The September CPI to be released just prior to the September FOMC, will be key in determining the Fed’s decision.”

Marvin Loh, senior macro strategist at State Street Global Markets, echoed the sentiment. “We got an employment report that everyone can cheer for for the first time in a while, with strong job gains showing the labor market remains solid, while overall labor force measures indicate that participation levels are beginning to improve.”

While it’s just one report, he noted, “it is one of the few times where good news can actually be interpreted as good news by investors. We don’t think this report will change any of the Fed’s short-term outlook, although a continuation of comparable trends will play into how hawkish the Fed feels it needs to get in mid-late 2023.”

A slowdown in wage growth will help quell inflation, he said, “although the demand and wealth created by large increases in the labor force will act as a counter lever to the demand destruction that the Fed’s financial tightening is intended to generate.”

Still, CPI will have a bigger role in determining how much the Fed will lift rates this month, Loh said, “although risk assets should breathe a bit of a sigh of relieve going into the long weekend.”

On the other side of the argument, Bryce Doty, senior vice president/portfolio manager of Sit Investment Associates, said, “Thanks to an uptick in unemployment from 3.5% to 3.7%, which is normally bad, it reduces the odds of a 75 bp increase by the Fed.”

Taken by itself, this report “tilt[s] the scales toward a 50 bp hike,” said Wells Fargo Securities Senior Economist Sarah House and Economist Michael Pugliese, “but does not on its own settle the matter.”

Even though it “keeps hope alive that the Fed may be able to pull off the elusive soft-landing, there remains significant work ahead in quelling the inflation pressures coming from the labor market,” they said.

The report showed Fed “tightening is having some effect,” said Jan Szilagyi, CEO and founder of Toggle AI. The increased unemployment rate, which indicates “some slackening” will be welcomed by the Fed, he said, as will the lower-than-expected gain in hourly wages, since “it gives the Fed a bit of breathing room because the economy may not be as red hot anymore.”

Parts of the report “support the case for easing off the brake,” according to Craig Erlam, senior market analyst, UK & EMEA at OANDA. And while a single report doesn’t carry much weight, he added, “a surprise spike in participation from 62.1% to 62.4% will undoubtedly be welcomed.”

While the positives “will be a relief to policymakers,” Erlam said, “I’m not sure it will be enough to change their minds at this point. There’s been such an effort to put 75 basis points on the table in recent weeks, to change their mind on the back of this would seriously undermine their guidance in future. If paired with another decent drop in inflation in a couple of weeks, more may be convinced.”

The report provides the “best case scenario” for the Fed, according to the Payden & Rygel economics team. “There’s no obvious need for the Fed to pivot to bail out the economy, nor is there as much concern about overheating if the trend of this report persists through the fall and the labor force continues to rebound.”

Don’t look for a rate cut next summer, said Interactive Brokers’ Chief Strategist Steve Sosnick. While the futures expect a 25-basis-point cut in June or July, he said, “that seems a bit quick, since the Fed tends to leave interest rates at a plateau after a period of hikes rather than immediately reverse course.”

The cut prediction suggests “fed fund futures traders are actually far more pessimistic than others, since the best explanation for their pricing regime is that a recession will come so quickly and decisively that the Fed will need to switch back to rate cuts sooner than other traders anticipate.”