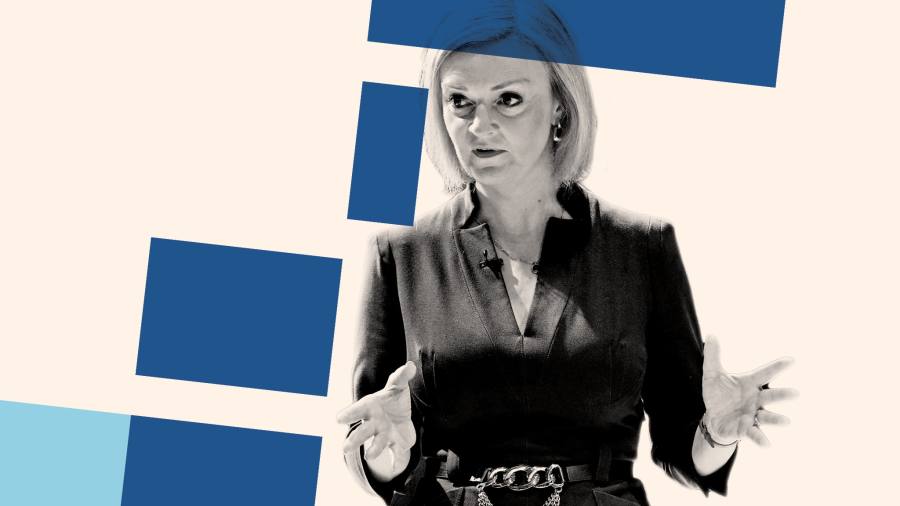 Surging inflation, the rising cost of government debt and Liz Truss’s promises on tax cuts and defence spending will blow a £60bn hole in the public finances by the middle of the decade, according to Financial Times calculations.

Although Truss, favourite to be named Britain’s next prime minister on Monday, has said she will stick to the government’s fiscal rules on debt, the permanent tax cuts she has promised coupled with nasty developments in the public finances would make that impossible.

Voting in the Tory leadership contest closed at 5pm on Friday after seven weeks of acrimonious debate, in which Rishi Sunak, former chancellor, claimed that Truss’s economic plan was “a fairy tale” and that extra borrowing would further drive up inflation.

In March, the Office for Budget Responsibility estimated that the government would meet its fiscal rules with about £30bn “headroom” to spare.

But higher debt and welfare costs have wiped out that headroom. This, alongside Truss’s pledges to reverse increases to national insurance, abolish planned corporation tax rises, and lift defence spending, will transform the public finances, according to the FT calculation, which is based on an Office for Budget Responsibility methodology.

Julian Jessop, a fellow at rightwing think-tank the Institute of Economic Affairs, has been advising the Truss campaign. He said if the fiscal watchdog delivered a similar projection “it won’t make any difference” to Truss’s plans.

“I don’t believe we will or should be setting policy on the basis of the OBR’s three-year forecasts for the public finances,” he added.

Truss has indicated that she will spend billions of pounds supporting vulnerable households and small businesses through the cost of living crisis, although such payments would be temporary.

The FT calculations show the public finance outlook had already deteriorated on July 7, when Boris Johnson said he would step down as prime minister.

The outlook deteriorated further during the leadership campaign as financial markets sold off UK assets in August and priced in significantly higher future borrowing costs. The expectation of higher interest rates has significantly raised the expected costs of the UK’s welfare payments and public debt, which stands at almost £2.5tn.

The OBR has said it does not expect tax revenues to be boosted by higher inflation to counter these effects. In a July report, it simulated temporary and permanent rises in energy prices similar to those hitting all European countries and found that there would be no boost to tax receipts. However, the economic hit would add to government borrowing and debt.

Since March, forecasts for inflation have been consistently revised higher as energy prices have soared and higher costs have spread from gas and electricity prices to food and almost all goods and services prices.

In March, the OBR thought CPI inflation would average 8 per cent in 2022-23 before falling back to 2.4 per cent in 2023-24. Forecasts from the Bank of England in early August and more recent predictions from Goldman Sachs suggest the inflation rates in these two years will be closer to 12 per cent this year and 7 per cent next year.

The Truss campaign had previously indicated it intended not to ask the OBR to produce a forecast to accompany any emergency Budget in the first few days of a Truss premiership even though the independent fiscal watchdog has said it is ready to publish.

In July, published an analysis of the economic impact of energy shocks, and projected a long-term hit to the public finances. Lowering taxes to offset an energy shock “merely pushes the cost of higher energy on to future households as the government cannot make the costs of more expensive energy go away”, it said.

Borrowing will be also affected by any measures that a new government puts forward.

The increase in inflation will wipe out £22bn of the near-£30bn headroom in the fiscal rules that existed in March, according to the FT calculation. The UK’s current fiscal rules specify that public debt should be falling as a share of the economy in three years’ time.

Markets expect the UK’s short-term interest rate this time next year to hit 4.4 per cent, up from 1.9 per cent in March this year.

Traders are betting the Bank of England will have to be forceful to bring inflation down and this will impose great costs on the public sector short-term debt held by the central bank as part of its quantitative easing programme. The level of this debt currently stands at almost £850bn of the total public debt of almost £2.5tn.

The government’s longer-term borrowing costs will mount as it has to sell new debt at higher interest rates than previously expected.

The average maturity of UK government debt is 14 years, so the effect is slow. However, the interest rate for 14 year debt has risen from 1.54 per cent in March to 3.12 per cent at the end of August.

Jessop said that if the outlook was so poor, this reinforced the need for “flexibility” in the fiscal rules and the need to cut taxes now to boost the economy.

Many economist agree that in the short term, the outlook for household finances is so difficult that additional measures will be needed to boost both household and corporate incomes.

Paul Dales, chief UK economist at Capital Economics, said “a big package of support” was necessary “to prop up [the economy]”. The damage in the short term from higher gas and electricity prices could amount to £100bn, he said, adding that this might require the government to suspend the fiscal rules to take emergency action.

But Dales warned that tax cuts should not be permanent when the public finances were under more serious long-term strain than previously anticipated.

“The key point is that the new prime minister should acknowledge that the situation has changed, that there is less room to cut taxes than before and that at some point either spending may need to be cut or taxes may need to rise,” he said.