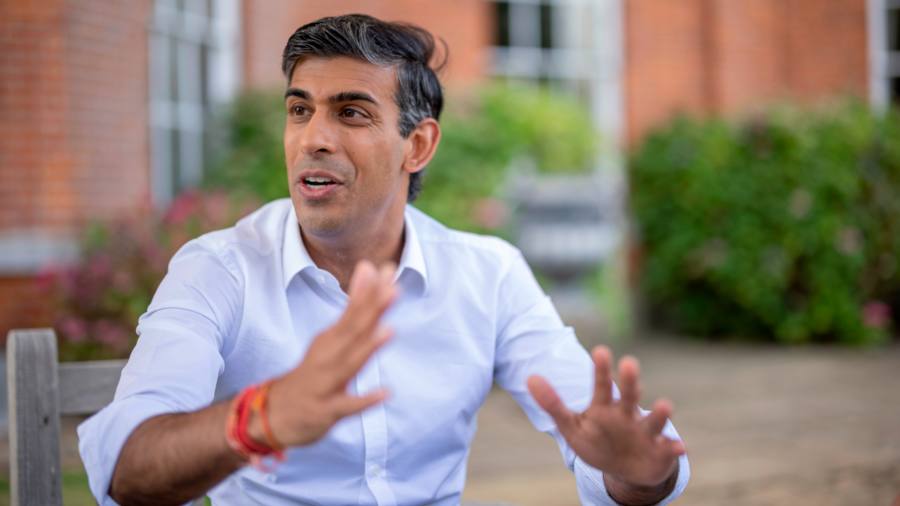 Rishi Sunak, Tory leadership contender, has warned that it would be “complacent and irresponsible” to ignore the risk of markets losing confidence in the British economy, as wagers against UK government debt sent short-term borrowing costs in the gilt market soaring.

In an interview with the Financial Times, Sunak said his leadership rival Liz Truss had made unfunded spending commitments that he fears could force up inflation and interest rates, and increase UK borrowing costs.

The former chancellor said he “struggled to see” how Truss’s promises of sweeping tax cuts and help for families struggling with soaring energy costs “add up”.

Truss is widely expected to be named as the UK’s next prime minister on Monday, but Sunak refused to concede defeat in the contest, claiming that many Tory activists had waited until the last minute to vote.

He cited former Bank of England governor Mark Carney’s reference to the UK’s reliance on the “kindness of strangers” to fund its deficits and said that market confidence had been maintained through having an independent BoE, strong institutions and a “credible fiscal trajectory”.

Sunak said he did not believe that the BoE needed a new mandate — Truss has called for a review of the independent central bank’s remit — arguing that it had all the tools it needed to fight inflation.

Big investors are betting on a fresh surge in UK borrowing costs because of fears that spiralling energy costs will force the BoE to sharply increase interest rates. The two-year gilt yield, which reflects market expectations for BoE policy, touched 3 per cent on Tuesday for the first time in 14 years.

“We have more inflation-linked debt by a margin than any other G7 economy — basically more than double,” Sunak said. “Because of the structure of QE [quantitative easing], we’re also particularly much more sensitive to an upward rate cycle than we have been.”

“My general view in life, you can’t take anything for granted,” he said. He said that for a prime minister and chancellor it would be “complacent and irresponsible not to be thinking about the risks to the public finances”.

Sunak, who has previously accused Truss of planning to borrow £50bn to fund her programme, toned down his criticism of his rival in the interview in an apparent acceptance that the party needs to start coming back together.

“Ultimately, you have to decide whether you think sustainable rates of borrowing are important or not,” he said. “I think they are.”

Speaking after addressing Tory members in Hertfordshire, he said: “What we need to do is just get a grip of inflation now. So that’s a combination of monetary policy, it’s making sure that fiscal policy does not make the situation worse and put fuel on the fire.”

Truss has promised an “emergency Budget”, vowing to reverse rises in national insurance and corporation tax. Allies have hinted at cuts to income tax and value added tax.

But the foreign secretary has also promised to stick to fiscal rules that would see debt falling as a share of GDP within three years. “I hope that if she wins, that she does stick to them,” Sunak said.

He warned that if the Conservative party surrendered its reputation for fiscal discipline it could destroy one of its principal advantages over Labour.

“That has historically been one of the strongest points of differentiation we’ve had versus Labour when it comes to an election,” he said. “I worry about the implications of ceding that territory down the line politically.”

The former chancellor defended his proposal to give ministers the right to “call in” decisions by City regulators, arguing that giving powers to politicians over “unaccountable people” was one of the benefits of Brexit.

“But that power should not be used regularly,” he said. “It’s there to be used rarely.” He added: “But it’s right that power does exist in the eventuality that the government wants to use it.”

Meanwhile, Sunak, who quit Boris Johnson’s government in July, suggested that while he expected Johnson to continue as an MP, the outgoing premier should accept that his time in frontline politics is over.

“I think at this point, we should move forward. I mean, I think 60 members of parliament, 60 members of the government all resigned, which you’d have to remember, it’s essentially unprecedented.”

Sunak was speaking at Brocket Hall, which proclaims itself to be “one of England’s finest stately homes”, set in 543 acres of Hertfordshire countryside, with two golf courses and an ornate Palladian bridge over the River Lea. It is here that Colin Firth was filmed in the BBC’s adaptation of Jane Austen’s Pride and Prejudice.

Some have said the Tory leadership contest is taking place in a parallel world to that inhabited by many voters, and on Tuesday party members turned up in Bentleys and Porsches to hear Sunak’s pitch.

In a wood-panelled conference room overlooking the grounds, the former chancellor delivered a smooth well-honed stump speech. He joked that one of the best parts of the race had been “all these people coming up to me and say ‘wow you’re shorter in real life’”.

During the Q&A, not a single Tory member mentioned the cost of living crisis — the nearest was a query on better insulation of homes. The biggest applause came for Sunak’s stance on cultural issues: “I want to take on this leftie woke culture that wants to cancel our values, our culture and our women.”

A recent series of polls has put Sunak at least 30 points behind Truss, who has held regular meetings this week with cabinet secretary Simon Case to prepare for the transition to government.

But the former chancellor told the FT that “a bunch of people I’ve spoken to say they still haven’t voted” and said he was still hopeful for an upset. His team has also held “transition” talks with Case in the event of a win.

Sunak has spoken to several thousand Tory party members over the past six weeks at more than a hundred events. One of the chief reasons he has struggled is the perception that he was responsible for the downfall of Johnson, who remains popular among Tory members and would beat Truss or Sunak if he were standing.

Sunak said “it was a great privilege to work for the prime minister” but he did not shy away from the policy areas where the pair disagreed, including over coronavirus lockdowns and the rise in national insurance in April.

“I’m instinctively loyal and my general view is old fashioned and quaint, as it now seems in this leadership race,” he said in a coded reference to the attacks by his leadership rival. “While you’re in the team, you have these debates in private, you come to a view and then you crack on.”

Sunak said he “always” tried to give Johnson the benefit of the doubt during policy disputes. “I was there to be supportive, to try and implement what he wanted. I always had a fair shot at making my case. Resigning from being chancellor is a big deal, it’s not something you should do lightly.”

Although he insisted that he can still win, Sunak was aware that the odds were against him. “I’d rather lose on that basis than win on a false promise,” he said. “I was always only going to do this on terms that worked for me, in the sense I was going to be true to myself, true to what I believe was right for the country.”

Sunak was asked by audience members at Brocket Hall whether he would take a job in a Truss government. “It’s a question for Liz and I’d have to think about it at the time,” he said. He also insisted that he was “not planning on leaving politics”.

Sunak said that his campaign had “won the big arguments”, a similar claim deployed by Jeremy Corbyn in 2019 after he led Labour to its biggest postwar election defeat.

“We started this thing, according to everybody, 30 to 40 points behind. It was not some great secret with the membership I was always starting from well behind,” he said. “I’m here working, and last week, and I’ll be continuing to do so today, tomorrow . . . I’m completely proud of the campaign.”