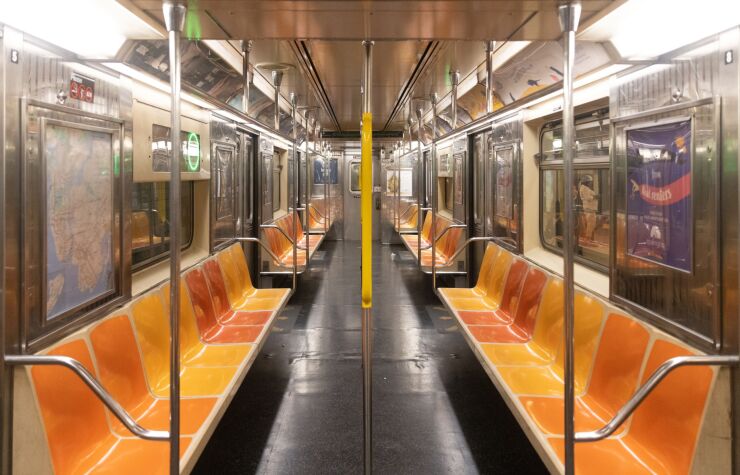 The New York Metropolitan Transportation Authority is running out of money as federal aid declines and many riders have not returned to the mass transit system in the wake of the COVID-19 pandemic.

By the end of fiscal 2024, the MTA estimates federal pandemic relief funds will be exhausted and projects budget gaps of up to$2.7 billion a year in the fiscal outyears as farebox revenue remains depressed.

This fall from grace is mostly because ridership is about 60% of pre-pandemic levels, with the agency experiencing the double-whammy of passengers avoiding the system because they work from home either part- or full-time and because of concerns about crime and public order on the transit system.

There could be some help fiscal help on the horizon for the MTA, as a long-discussed congestion pricing system for Manhattan inches closer to reality.

The proposed Central Business District Tolling program would charge tolls on all vehicles entering Manhattan south of 60th Street, not including the FDR Drive or the West Side Highway.

These tolls are predicted to bring in about $1 billion of revenue a year for the agency.

The plan is moving slowly toward a 2023 implementation. Based on this revenue stream the MTA is expected to sell municipal bonds that it forecasts will create about $15 billion of investment that will go toward its $55 billion capital plan.

Key drivers of this slow recovery include increased remote work arrangements and heightened safety concerns among riders, Kroll noted in the report.

“One of the things we noticed is that transit ridership is still lagging significantly from pre-pandemic levels,” Paul Kwiatkoski, senior advisor at Kroll, told The Bond Buyer on Thursday.

“It’s kind of like the chicken and the egg problem. People don’t necessarily want to take mass transit until it feels a little more safe, but the less ridership on it, the less safe it can feel,” he said.

He noted that the MTA’s recovery levels are higher than many other mass transit systems.

“In terms of the bond security, this is not a negative result for these issuers,” Kwiatkoski said. “Farebox does not fully provide for all operating expenses and all capital expenses at transit agencies. They do need other revenue sources, which vary. Sales taxes are a big contribution and MTA gets toll revenues from the TBTA.

“So historically transit systems have benefitted from more than just simply farebox revenues. So these bonds are fairly well protected because things like sales taxes and payroll taxes have recovered pretty well,” he said.

A report released Monday by the Citizens Budget Commission says that even as the MTA increases the amount of capital projects it contracts for each year, it will not be able to commit $28 billion of its $53 billion of currently planned projects by 2024.

The report added that 20% of the agency’s critically important planned capital financing is unaffordable or at risk.

Thus far, the CBC report said, the MTA has not laid out a detailed, prospective multiyear plan that would allow the public to know which remaining projects are prioritized through 2024, when they are expected to be completed, the impact on the system’s state of good repair, and the likelihood that the system’s service would be able to be maintained and not deteriorate due to disrepair.

The CBC recommended the MTA prioritize projects to complete through 2024; publish a schedule of priority projects still outstanding from the current and prior plans; develop a comprehensive 2025-2029 plan; and work diligently to increase capacity and reduce capital costs.

“We also took a look at the financing,” Ana Champeny, CBC’s vice president for research, told The Bond Buyer. “There are a few points to be made about risk in terms of these sources that were identified for financing the capital plan.

“One point is that they are planning to spend to finance $11.5 billion of this with either MTA bonds or pay-go capital. Given the structural deficit in the operating budget, we have concerns about whether it’s appropriate or fiscally prudent to take on additional capital spending or additional bonding that would increase debt service in the operating budget until they take the necessary steps to address that gap.”

The CBC did note that there was positive movement on congestion pricing, which it deems as a crucial source of capital funding. The CBC has long supported congestion pricing to reduce traffic and emissions while generating revenue critical to support the MTA’s 2020-2024 capital plan.

The best-known example of congestion pricing is in London, where it is widely credited with reducing traffic and raising funds.

The MTA on Aug. 10 released its Environmental Assessment, scheduled public input sessions and named members of the Traffic Mobility Review Board.

The congestion pricing environmental review, which gave some details on the how the plan could work, was required by the federal government to implement the plan because some of the roads are part of the National Highway System and receive federal funding.

“The MTA is forging ahead to implement Congestion Pricing,” MTA Chair and CEO Janno Lieber said in a statement. “We have overcome huge hurdles and are ready for public comment and a second phase of hearings once the FHWA shortly releases the EA document.”

Champeny will testify on Aug. 31 on the importance of the program and stress that the tolling should be variable, easy to understand, and clearly communicated to drivers.

“Credits and exemptions should be minimized to ensure the toll for other drivers is not so high that support for the program is threatened,” CBC said. “Furthermore, CBC recommends the MTA track, evaluate, and publicize the actual impacts, and make periodic adjustments to tolls to minimize congestion and emissions while ensuring adequate revenue.”

The MTA’s preliminary schedule of charges to be levied didn’t please some critics.

“The proposal makes clear what many allege. The plan is clearly designed as a money grab more than it is a plan to reduce congestion or improve the environment,” said Joseph Krist, publisher of Muni Credit News.

“The MTA released seven different scenarios for the tolling plan, with peak-period toll rates to enter the Central Business District below 60th Street of anywhere from $9 to $23, depending on the version implemented,” Krist said in his weekly newsletter. “In virtually all configurations of the plan, ‘peak’ would run from 6 a.m. to 8 p.m. on weekdays and 10 a.m. to 10 p.m. on weekends. That clearly is designed to impact those coming into the city for Broadway shows, other cultural events, and sports events.”

The debate will be robust, he said, adding there were many ways to address congestion which the MTA has not tried, such as designated pick-up/drop off areas for Uber and other vehicles.

“The levels of pricing will need to be decided in the future and that whole process will need to play out,” Karen Daly, Kroll senior managing director, told The Bond Buyer. “The intent is to encourage people to give up their cars and take mass transit.”

She said that when the pricing levels are finally arrived at, the effect on mass transit ridership will have everything to do with the price and the demand.

“So it might be one level at $23 and another level at various other rates, and I think that will need to be decided in the upcoming months, and then we’ll be able to see the effect of movement towards mass transit,” she said.

The MTA is a state agency that Albany took over from the city during the fiscal crises of the 1970s. Since 2011, it has sold about $43 billion of debt.

The Triborough Bridge and Tunnel Authority has almost $9 billion of debt outstanding.

The TBTA’s senior lien general revenue resolution bonds are rated Aa3 by Moody’s AA-minus by S&P and Fitch and AA by Kroll. All four agencies have a stable outlook on the TBTA.

“Effective congestion pricing implementation targets congestion, emissions, and revenue together ― not just revenue alone ― in a fair and sustainable manner that limits exemptions and maximizes social benefits,” the CBC said, adding that it “supports speedy implementation, paired with ongoing monitoring and continual improvement, to reduce congestion and emissions and improve transit for the future of all New Yorkers.”