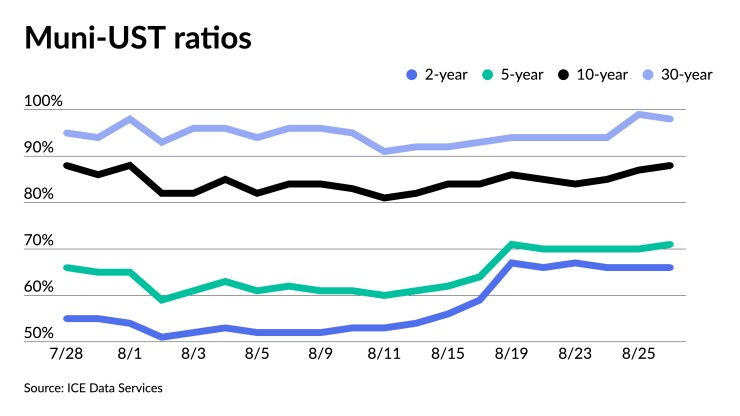 Municipals were steady Friday, while U.S. Treasuries were mixed and equities sold off in the aftermath of Federal Reserve Chair Jerome Powell’s promise the Fed will keep raising interest rates to combat inflation.

In light of the market’s concern over Powell’s speech at Jackson Hole, BofA strategists Yingchen Li and Ian Rogow “continue to view the Fed’s hawkishness as a better way to keep inflation expectations down.”

The turning point for the current bearishness, they said, can be “anything in the forthcoming economic data that offers clear indications for weakened consumer spending or, more directly, a continued decline in inflation.”

“The magnitude of yield curve flattening/inversion signifies the level of success of the Fed’s approach,” they noted.

But “the futures market-implied peak fed funds rate for this tightening cycle is still around 3.75%,” they said, “no different than at mid-June’s peak bearishness.”

Most of the flattening, they noted, should come from the front end.

One year after the last hike the slope should “steepen to the 74bps range.”

Ratios should richen during the cycle, with historical averages suggesting 10- and 30-year ratios “around current levels,” but the 30-year should “richen to the 90% range one year after the last hike,” the BofA strategists said.

Smaller calendar
Investors will be greeted Monday with a smaller new-issue calendar, estimated at $5.882 billion, down from total sales of $6.134 billion in the week of Aug. 22.

There are $5.570 billion of negotiated deals on tap and $312.8 million on the competitive calendar.

The primary is led by the $1.768 billion of general airport senior lien revenue and revenue refunding bonds from Chicago O’Hare International Airport, followed by $697 million of taxables from the Oklahoma Development Finance Authority and $316 million of revenue bonds from the New Jersey Housing and Mortgage Finance Agency.

The Arlington Heights School District No. 25, Illinois, leads the competitive calendar with $59 million of GOs.

Powell fallout
“Chair Powell threw cold water on the market’s belief that the Fed will move to marginally restrictive policy and then pause,” said Jeff Klingelhofer, co-head of investments at Thornburg Investment Management. “The Fed will not rest until they gain significant confidence that inflation is on a clear path back toward 2%, and at this time they’re telling us this isn’t the case.”

Jason England, global bonds portfolio manager at Janus Henderson Investors, said the speech showed taming inflation is the Fed’s top priority; the fed funds rate will have to get to a restrictive level — 3.5%-4.0% — and the “rate will need to stay higher until inflation is brought down to their 2% target thus cuts priced into the market for next year are premature.”

Looking at the upcoming Summary of Economic Projections, Ed Al-Hussainy, senior rates strategist at Columbia Threadneedle, said, “The odds are that the dots will have to go higher than the 3.75% anticipated through 2023 at the July meeting.”

In fact, Al-Hussainy expects the September dot plot to show rates “slightly above 4%. … The front-end of the rate curve has to adjust in that direction as well.”

Also, it’s clear “that once they reach the desired terminal rate, it has to stay there for some time,” he noted. “The longer you stay there, the more likely the front-end of curve bleeds into the long-end,” Al-Hussainy said. “We’re talking about quarters, not years, but the idea of rate cuts in the second half of 2023 are unlikely.”

“This was a very clear push back on market expectations of a pivot from the Fed in 2023,” said Brian Coulton, chief economist at Fitch Ratings.

After being surprised by the “intensity and duration of inflation pressures over the last 12 months, the Fed is now clearly determined to make sure high inflation does not become embedded,” he said.

Coulton noted this means “taking rates above neutral through more outsize hikes in coming meetings and then holding them there for some time — likely through the whole of next year.”

However, nowhere in his speech did Powell give any indication whether there will be a 50 or 75 basis point hike at the September meeting. That could be because it’s a close decision. Speaking on CNBC Friday morning, Atlanta Fed President Raphael Bostic noted there would be more data before the next meeting, which could change his thinking, but for now “he’s leaning toward a 50-basis-point hike.”

Regardless, Janus’ England noted 50 basis points is “still a substantial size hike so it should not be taken as a dovish pivot as there is more work to be done on inflation and they will keep at it until the job is done.”

But Jeffrey Cleveland, principal and chief economist at Payden & Rygel, said, “Powell’s words strongly hinted at another 75 bps rate rise.” Given the economic situation, expect the Fed “to err on the side of being too hawkish rather than ‘prematurely’ pivoting.”

The Fed will likely lift the fed funds “to at least 4%,” he said and keep it at that level “for a bit so the Fed can reassess the growth and inflation backdrop before making the next move. Investors prematurely expecting a pivot is the notion Powell pushed back against on Friday.”

What The Rise Of Private Clubs Predicts For The Future Of The Office
Mr.C-Branded Residences Come To The Dubai Waterfront
Pimco’s Ivascyn sees a mild recession ahead and several investing opportunities
Microstrategy Is Seeking a Full-Time Lightning Network Engineer to Build a SaaS Platform
Ethereum Merge spikes block creation with a faster average block time