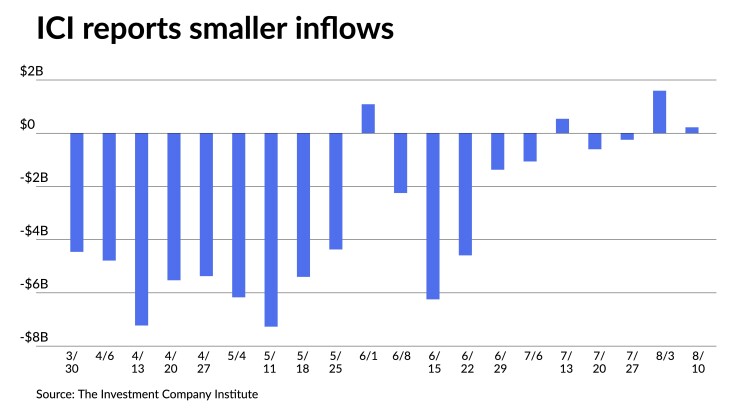 Municipals sold off Wednesday with the largest losses up front, pushing the one-year triple-A yield well above 2%, the first time since March 2020. U.S. Treasuries were weaker and equities ended down.

U.S. Treasuries started the day with large losses after higher inflation numbers out of Europe led to volatility early on but they pared back some into the afternoon following the Federal Open Market Committee’s latest minutes that signaled a future slowing of rate hikes.

“The Fed sees there is a risk that they tighten policy by more than is necessary, so we expect they will take a more measured timeline than we have seen so far this year,” Daniela Mardarovici, co-head of multisector fixed income at Macquarie Asset Management, said. ”We saw a bounce in Treasuries as the market took the minutes to be less hawkish, but ultimately this was not new information, so the reaction has been muted.”

But early losses out of the gates for munis continued up to the close. The short end was hammered in the secondary with large blocks of high-grades showing big swings to higher yields. The two-, three-, four- and five-year triple-A yields also topped 2%, while the rest of the curve wasn’t spared the damage and triple-A yields rose by seven to 16 basis points.

The primary saw new-issues being repriced to higher yields in a reflection of the day’s moves.

The Investment Company Institute reported $223 million of inflows into muni bond mutual funds in the week ending August 10 compared to $1.589 billion of outflows the previous week.

Exchange-traded funds saw outflows of $379 million versus $352 million inflows the week prior, per ICI data.

FOMC minutes
The Federal Open Market Committee discussed a future slowing of rate hikes and maintaining that level to assess their impact on the economy and inflation, according to the minutes of the July 26-27 meeting.

“Participants judged that, as the stance of monetary policy tightened further, it likely would become appropriate at some point to slow the pace of policy rate increases while assessing the effects of cumulative policy adjustments on economic activity and inflation,” according to the minutes. Some participants remarked that when rates hit “a sufficiently restrictive level,” the panel should keep rates there “for some time to ensure that inflation was firmly on a path back to 2%.”

Members saw signs their actions were already having an impact on the economy, especially sectors that are interest sensitive, but most of the effects were not yet felt.

But participants expressed concern ”the Committee could tighten the stance of policy by more than necessary to restore price stability,” and urged the panel maintain a “data-dependent approach to judging the pace and magnitude of policy firming over coming quarters.”

The FOMC minutes suggest the Fed “believes ‘ongoing increases in the target range for the federal funds rate’ will continue to be appropriate given inflation is well above their objective,” Mardarovici said.

Since the FOMC views “their current fed fund range as ‘neutral,'” it is likely the committee “will have to move to the ‘restrictive’ range to meet their objectives,” she said.

Despite this, she said the Fed is “likely to slow the pace of rate increases to account for lags associated with monetary policy.

The minutes suggest “the Fed will remain on a tightening path, but there are signs some officials are getting a little nervous that they could end up going too hard and may need to reverse course eventually,” said James Knightley, ING chief international economist.

He noted there is no real “forward-looking guidance,” dissimilar from June minutes when the Fed suggested July would be either a 50 or 75 basis point rate hike. There’s another jobs report and consumer price index report, along with the Fed’s Jackson Hole conference starting next week, which will give the Fed plenty of chance to try to shape expectations, Knightley said.

“It is still all to play for with the market continuing to hedge its bets, pricing 63bp of hikes at the September FOMC meeting,” he said.

He believes there will be a 50 basis point hike at both the September and November meetings, followed by a 25 basis point hike in December, but if another 350,000 jobs print for August or CPI “failed to show any moderation from the 8.5% headline and 5.9% core then we would likely switch to a 75bp call for September.”

Strong backdrop still for munis
Credit strength and low default rates, state government issuers’ fiscal strength, and low new-issue supply met by improving demand could lead to a positive outlook for municipal bonds ahead, according to a new report from Lord Abbett & Co.

These factors could provide a strong backdrop for municipals in the near future, despite recent market volatility stemming from headwinds such as rising interest rates, slowing U.S. economic growth, and the uncertainty over the persistence of inflation, which “weighed on investors’ concerns, prompting historically large outflows from municipal bond funds,” the report from the Jersey City, N.J.-based asset manager said.

Credit stability and historically low defaults are two of the chief factors fueling the potential for a positive municipal landscape, according to the firm.

“Although investors remain heavily focused on recession risk in the U.S., especially given the recent advance Gross Domestic Product report showing a decline of 0.9% in the second quarter, municipal bond markets might have already started pricing in the potential impact of Federal Reserve rate hikes,” Lord Abbett said. “Higher absolute yields, even before reflecting munis’ tax-exempt status, are also contributing to increased interest in the asset class, after a very challenging first and second quarter of this year.”

While economic weakness can impact municipal bond credit strength, defaults within the asset class have been historically very low, it continued.

“As demand potentially continues to improve, supply remains low due to a substantial lag in new-issue municipal bonds,” the report said.

The lower supply of new-issue municipal bonds in the first half of 2022 “may provide a tailwind for valuations in the coming months,” Lord Abbett said.

Record outflows from municipal bond funds this year through the last week in June have exceeded the total outflows in each of the last 10 years.

“Periods of substantial outflows have often been followed by attractive returns going forward, as higher absolute yields, and potentially even more compelling tax-equivalent yields, entice renewed investor interest,” Lord Abbett’s report said. That, combined with the lower overall supply issued so far in 2022, may provide a tailwind for valuations.

Judging by the key factors lending strength to the municipal market, there is a potentially rosy forecast ahead for the industry, the firm said.

“Muni credit strength has translated into historically very low to nearly negligible default rates for investment-grade bonds compared to other segments of the fixed-income market,” it said. “Although slowing economic growth amid persistent inflation can impact municipal bond issuers, state government issuers have been bolstering reserves to strengthen their financial health, while other sectors within the asset class have also benefited from fiscal stimulus and the strong economy.”

“We think these key trends are likely to provide an appealing backdrop for municipal bonds and potentially an attractive entry point for investors seeking tax-free income available at today’s higher yields,” the firm added.

The largest environmental, social and governance municipal bond financing to date, according to the treasurer’s office, saw orders from more than 130 different investors, including $118 million from retail investors.

The deal was the culmination of a two-year multi-agency effort to stabilize the finances of the state’s Unemployment Trust Fund.

Proceeds will be used to repay loans from the Federal Unemployment Trust Fund, which were obtained during the height of the COVID-19 pandemic. Unemployment in Massachusetts hit historic highs during the crises and the state took out loans to deposit into their fund to help moderate employer state unemployment tax rates and to improve the fund’s solvency.

“Despite volatile market conditions, including an inverted Treasury yield curve and continued Federal Reserve board action on short term interest rates, all of the maturities saw an oversubscription in orders,” the state treasurer’s office said. “Both serial maturities in 2027 (January and July) were oversubscribed by two to five times and the yields on both maturities were lowered by two and four basis points. The term bonds in 2029 and 2031 were two times oversubscribed and bonds were repriced to lower yields by three basis points.”

The bonds, priced by Jefferies, were rated Aa1 by Moody’s Investors Service and AAA by S&P Global Ratings and Kroll Bond Rating Agency.

Chip Barnett contributed to this story.