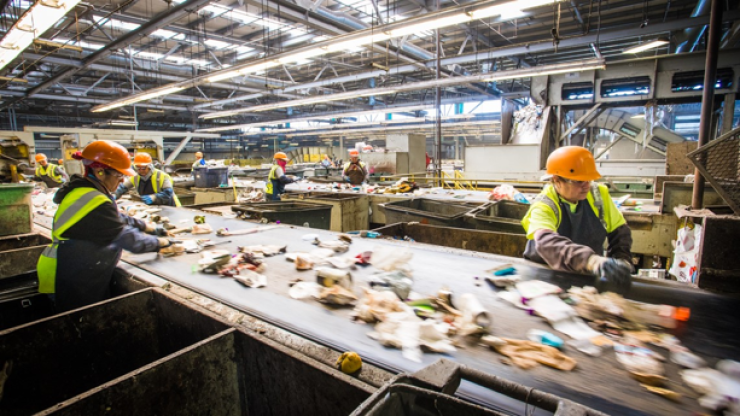 After a nearly 30-year vacation from the bond markets, the Western Placer Waste Management Authority, California, returns next week with $97 million of solid waste revenue bonds.

S&P Global Ratings assigned an AA rating to the deal.

The deal should attract investor interest, because it’s a new credit, and California debt usually has a ready market from high-net investors, who benefit from the tax exemption.

“I think it’s unique to the market,” said Eric McKean, a managing director with underwriter Ramirez & Co. “There have not been a lot of essential service credits in the market.”

The bonds, expected to price Aug. 23, won’t have separate institutional and retail days.

The authority is a joint powers authority formed in 1978 by Placer County and the cities of Lincoln, Rocklin and Roseville to own, operate and maintain a sanitary landfill and its related improvements. The facility is on a 320-acre parcel owned by the authority with the materials recovery facility adjacent to the landfill.

It provides waste management services to 95% of the county, according to offering documents.

Placer County, east of Sacramento, which has a population north of 400,000, has long handled its waste in a manner dissimilar to other California governments. For instance, in Los Angeles homeowners have three different bins for recycling yard waste and plain old garbage.

In Placer County, residents have just one bin, because the waste its residents produce is separated at the waste facility.

“We have found it increases the diversion rate and it’s more responsive to the market for recyclables,” said Eric Oddo, environmental engineering program manager for the waste management authority.

Additionally, half of the county’s waste stream is residential and half is industrial, Oddo said.

“It puts a burden on the business to separate the trash,” Oddo said. “And, doing it this way we don’t have to worry about the participation rate of customers” who may or may not be careful to put things in the correct bin.

“What we have found over time is that our system is on par, or better than systems that require residents to pull recyclables out,” Oddo said.

If the county did the three-bin system, “we would be constantly trying to educate 300,000 to 400,000 residents that always change,” said Ken Grehm, executive director of the authority.

Oddo said the authority has been doing it that way since 1995 when it first built the waste material facility. The bonds will pay to upgrade the facility and make it more efficient, he said. It will also incorporate new technology like robotics and artificial intelligence.

“It’s the same process, we are just ramping up the effectiveness of the system,” he said.

The improvements will cost $130 million to $140 million with the bonds paying for the bulk of the project.

“We are totally upgrading the material recovery facility, and taking out 100% of the equipment,” Grehm said. “We are putting in optical scanners, equipment that will sort by size and density. There will also be a manual room for people to pick out product that needs to be pulled out of the waste stream.”

The state has now mandated that material facilities process 75% of organic material to get it out of the waste stream. The Placer County facility will compost most of that. The county is already ahead of the game because of its agricultural heritage, and it has a great record on composting, Grehm said.

The authority has contracted with FCC Environmental Services, LLC to operate the landfill and to design, build and operate the materials recovery facility. It’s a Spanish firm with a Texas office.

“They are confident they can market the material locally,” McKean said. “Rather than ship it across the country, it would be shipped across the street.”

For instance, a local company is interested in using plastics to develop low-cost building materials, he said. Another pilot project they are contemplating would involve providing biomass to a company that wants to use it to produce energy and electricity.

The project is nearing completion on design with the goal of starting construction later this year or in first quarter 2023, and finishing by fourth quarter 2025.

“Through the entire process, the facility would continue to operate because it would be constructed in stages,” Grehm said.

As for the bond sale, Ken Dieker, principal with Del Rio Advisors, said “clearly there has been a lot of market volatility.”

“We have been modeling conservative projected interest rates,” Dieker said. “The market has improved in the last few weeks. We don’t know where it will be when we price, but we are happy about where it is going right now.”

He pointed to the fact that mutual funds are beginning to return money back to the muni space.

“Demand is going up, the yield levels are high enough to attract investors,” Dieker said. “There is also a huge amount of redemptions this month, so that will push demand. We are expecting things to remain stable, or be better than expected, when we price.”

The authority also does not have future debt plans, so bonds will not be diluted with future parity debt, Dieker said. “I think that will also be attractive for investors.”

It last sold bonds in 1994, according to the Municipal Securities Rulemaking Board’s EMMA disclosure website, and those bonds have matured.

The finance team doesn’t expect the deal to price as high-yield, because of its double-A rating.

“The authority has a lot of credit strength,” McKean said. “I think investors will focus more on that than on the construction risk.”

The board also raised rates in anticipation of the financing, on top of a rate increase executed three years ago.

“I think there will be a broad spectrum of buyers,” McKean said. “We expect a lot of interest, particularly from California bond funds.”

The deal also offers investors less risk than other utilities, like water, that have been impacted by the drought, Del Rio said.

“Water credits, in particular are going to go through issues, there may not be defaults, but they will see drought surcharges and conservation measures that reduce revenues,” Dieker said. “This is a stable credit. Everyone has to dispose of waste.”

Investors also appreciate the opportunity to invest in a different name, McKean said.