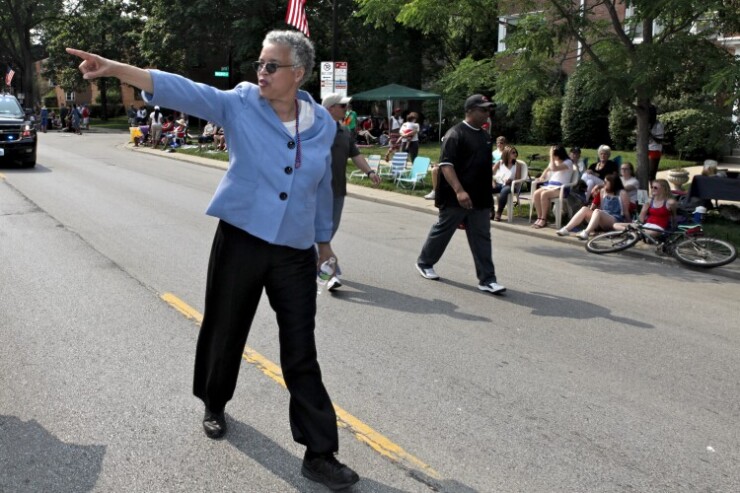 Cook County, Illinois, heads into the market this week with two deals totaling nearly $500 million that will benefit from an outlook from boost from Moody’s Investors Service over its healthy fund balances.

The county, which includes Chicago, is also offering on Thursday $280 million of GOs to refund 2012 GOs in a $271 million tax-exempt refunding piece and $9 million taxable tranche. Barclays and Loop Capital Markets are senior managers. Acacia Financial Group Inc. and Columbia Capital are advisors. Nixon Peabody and HLF are bond counsel.

The GO sale carries ratings of A2 with a newly revised positive outlook from Moody’s Investors Service, an A-plus from S&P, and a AA-minus from Fitch Ratings. The latter two assign stable outlooks. The county will have $2.4 billion of GOs outstanding after the sale.

“We expect the short amortization to help stimulate demand for these bonds,” CreditSights’ John Ceffalio, senior municipal research analyst, and Patrick Luby, senior municipal strategist, said of the GOs, which the firm gives a market perform recommendation on the bonds.  CreditSights views the sales tax bonds as a “slightly stronger credit” than the GO.

“The rating is likely to move upward if the county can sustain strong financial reserves and balanced operations despite potentially deteriorating underlying economic conditions and myriad challenges and uncertainties associated with operation of a large safety net health system,” Moody’s said.

Fund balances have swelled in recent years rising to $869 million last year, which would cover 49% of expenses, from $265 million in 2017 including a $259 million jump from 2020 to 2021. The influx of $1 billion of COVID-19 pandemic relief from the American Rescue Plan Act helped bolster the fund balance’s health.

“While some temporary use of reserves could be anticipated in the event of an economic downturn, Fitch expects that the county would take steps to restore balance in a timely fashion, leaning on its broad revenue raising authority and demonstrated willingness to enact recurring cost-saving measures,” Fitch said in its report.

Reversing a trend of negative actions, Fitch lifted the county’s GO rating to AA-minus from A-plus in November while S&P returned the county’s outlook to stable from negative.

The county’s pension funding health — despite improvements from supplemental contributions — weigh on the rating.

“We believe pension liabilities be a significant and ongoing budgetary pressure on the county’s finances and managing its contributions will be critical in maintaining the rating,” said S&P analyst Helen Samuelson.

The county this year will make a $324 million supplemental contribution bringing to the total to about $2.3 billion of additional payments made since 2017 with revenue from a sales tax hike. The county is carrying a $6.3 billion unfunded pension and healthcare liabilities’ tab with the pension system 67% funded based on 2021 results.

Under current statutes, the fund would deplete assets by 2054 but that assumes no additional supplemental contributions. The county intends to continue making those additional payments that put it on track for 100% funding, but the county still needs to reach agreement with its pension fund on a revised schedule. Once reached, it would go before state lawmakers to cement in law.

“Despite the lack of state legislative action, Fitch expects the county to continue its commitment to planned supplemental pension contributions, which should improve the health of the pension system over time,” the agency said.

The county is grappling with delayed property tax collections as second installment bills are months-late in being sent out. Cook County Assessor Fritz Kaegi, who manages property valuations, and the Board of Review, a three-member elected board that handles appeals, have blamed each other for the delays that stems from the technological transition to an integrated property tax system.

The county tells investors in a presentation that “importantly, based on preliminary estimates and the availability of certain other funds, the county anticipates that it will continue to be able to timely make its debt service payment and fund its operations.”

The county last month announced plans for a $300 million loan program for qualified local governments should they need help covering expenses due to the delay.

The county has $564 million of outstanding sales tax bonds. Proceeds of the sale will pay down a $170 million of credit line interim financing. The remainder will refund 2012 bonds.

Sales taxes have seen a healthy rebound after falling to $722 million in 2020 from more than $800 million in 2019 due to early pandemic hits. Tax collections rose to $862 million in 2021 — providing 13.8 times coverage of debt service — and are budgeted for $968 million this year. The state began collecting online sales taxes last year, helping along the recovery.

“The stable outlook reflects KBRA’s expectation the even under severe economic downturns and other stressful scenarios, the pledged revenues will continue to provide exceptionally strong debt service coverage. The outlook additionally assumes no adjustment in the 1.75% sales tax rate and manageable future borrowing,” Kroll said.

County Board President Toni Preckwinkle in June projected an $18.2 million general and health fund gap — the lowest in a decade — in the budget that would cover fiscal 2023 beginning Nov. 1. That’s down from a $121.4 million shortfall projected a year ago this time ahead of the eventual adoption of a fiscal 2022 $8.1 billion budget.

The county, which includes Chicago, attributed the improved picture to a combination of federal relief, one-time revenues, prudent financial management and a tight labor market. No layoffs or tax hikes are expected.

Starboard snaps up a position in Wix, and building free cash flow may become a focal point
Why Sarepta Therapeutics Stock Soared on Tuesday
Home purchase cancellations are above 15% for the second straight month. It’s important to know the financial repercussions
Blockchain firm sues Coinbase for $350M alleging patent infringement
Inside the $250 million penthouse on ‘Billionaires’ Row’