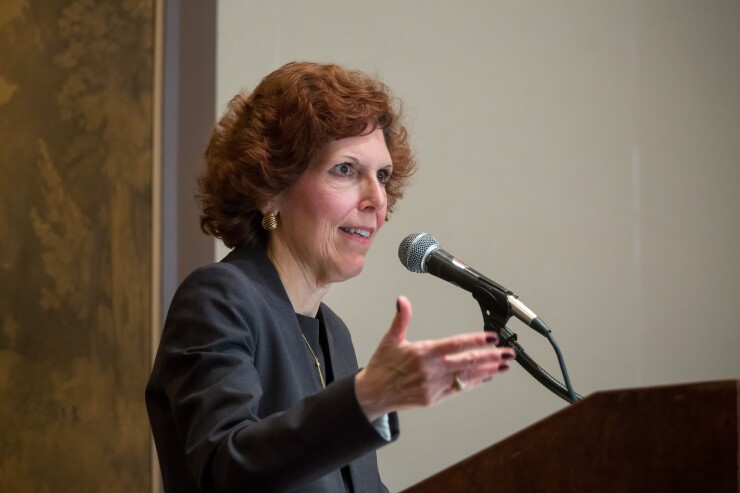 The Federal Reserve is committed to cooling inflation and needs to raise interest rates to a little above 4% to ease demand, Cleveland Federal Reserve Bank President Loretta Mester said.

“We’re committed to getting inflation down” to the 2% target, which will require more rate increases, Mester said during an event hosted by the Economic Club of Pittsburgh Thursday, repeating comments she’d made earlier in the week.

The U.S. central bank raised interest rates by 75 basis points last month for the second straight meeting, delivering the most aggressive rate increasing campaign in more than a generation to cool an inflation rate that’s running at a 40-year high.

Policy makers speaking this week have pledged to continue the rate hikes, pushing back against the expectation that the central bank may be pivoting to a less aggressive phase of tightening monetary policy. Mester joined the chorus, saying during a call with reporters that she thinks the rate path outlined in the Fed’s summary of economic projections in June is “about right.”

“We raise interest rates, and then when we get up to a sufficiently high level where we’ve seen that compelling evidence, then we hold them there for a while, and then we can bring them back down, right as we get inflation closer to goal,” Mester told reporters.

Policy makers will update those forecasts in September; Mester said she may support front-loading more of her projected rate increases, but that it will depend on the incoming data.

The Fed official, who has a vote in monetary policy this year, said another 75 basis-point increase in September is “not unreasonable,” but that policy makers could also raise rates by 50 basis points.

Bond traders are betting that the Fed will start cutting interest rates as early as the first half of 2023 and some investors interpreted the comments Fed Chair Jerome Powell made after last week’s press conference as a sign that officials could soon become less aggressive.

But Fed officials say the U.S. economy is still on stable footing, pointing to strong jobs growth as better evidence of the health of the economy than data showing that gross domestic product contracted for two straight quarters.

Consumer prices increased by 9.1% in June from a year earlier, and officials say the price gains have yet to slow. The Labor Department will release the July readout on Aug. 10.