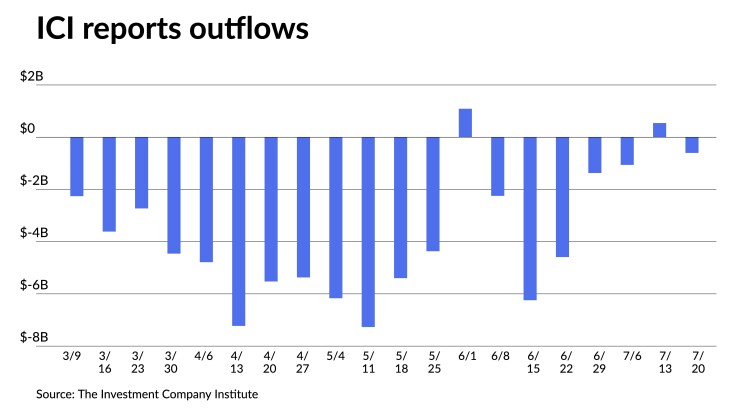 Municipals were firmer following the Fed’s decision to hike rates another 75 basis points, while U.S. Treasuries rallied on the short end and equities ended up.

Despite this being another “outsize rate increase” of 75 basis points, Brian Coulton, chief economist for Fitch Ratings, said “the Fed has still only raised interest rates back into line with its own estimates of the long-run neutral rate.”

Coulton said the Federal Open Market Committee’s statement “acknowledged the recent softening in activity data but this is given short-shrift in the presence of what is still a very robust labor market and unrelenting inflation pressures.”

“Given where core inflation and the unemployment rate currently stand this underscores that monetary policy adjustment still has quite a long way to go,” he said. “Market expectations that the Fed may be cutting rates again next year look premature.”

“We think inflation is still too high and they need to continue pressing forward with rate hikes and quantitative tightening,” Agudelo said.

For the September meeting, the Fed will have the benefit of having multiple economic data points before deciding on the next move. The committee is taking a “wait and see” approach to the future path of Monetary policy,” Agudelo noted.

For muni participants, they”are not without worries over the Fed’s tightening campaign, but cyclical forces and strong fundamentals have catalyzed positive returns for July, with the asset class doubling the returns shown for UST securities month-to-date,” said Jeff Lipton, managing director of credit research at Oppenheimer Inc.

Indeed, municipals are returning 2% so far in July.

“With the outperformance booked by munis, relative value ratios have become more expensive with shorter maturities still the richest,” he said.

Demand for muni product has been strong this summer, and Lipton expects “market technicals to remain supportive through August with a likely continuation of positive performance.”

“As recessionary concerns intensify, a sustainable flight-to-quality trade should emerge with munis well positioned to offer investors a predictable revenue stream of tax-exempt income,” he said. “A repositioning of deployable cash into longer dated maturities may offer strategic value with more attractive total return should rates revert to lower ground, and so we suggest that curve extensions may be appropriate for those investors relatively unhindered by duration risk.”

The Investment Company Institute reported investors pulled $602 million out of muni bond mutual funds in the week ending July 20 compared to the $543 million of inflows in the previous week.

Despite fund flows returning to negative, Lipton believes “that stronger market conviction and less inflationary stress will temper the pace of outflows and likely produce a cycle of intermittent inflows or perhaps even a sustained period of positive flows.”

“While there may still be somewhat active bid wanted activity, we expect institutional selling pressure to subside with the availability of better relative value along the long end of the curve,” Lipton noted.

“There is a compelling list of muni tailwinds that provide fertile ground to extend the July performance momentum,” he said.

“Entry points are now attractive with munis poised to recover even more of their year-to-date losses, although it would be a reach to end the year in positive territory,” he added. “Greater comfort with Fed policy actions can make fixed income investment more compelling for those anxious investors starving for directional guidance and can pave the way for heavier allocations of capital into the muni asset class.”

“The Fed statement said they are still ‘highly attentive’ to inflation risks and that ongoing increases will be appropriate,” noted Edward Moya, senior market analyst at OANDA.

In his press conference, Fed Chair Jerome Powell stressed that he doesn’t believe the U.S. economy is currently in a recession, mostly because of the strength in the labor market and continued consumer spending.

As for future moves, Powell said there was “very broad support” for the 75-basis-point hike this meeting, which brings the fed funds rate “into the range of neutral.”

Decisions on future rate hike, he said, will be made on a meeting-by-meeting basis. He pointed to the latest Summary of Economic Projections and noted, “SEPs can get old quickly. This one remains a good guide” for the panel’s thinking. The latest SEP suggested a fed funds rate between 3.25% and 3.50% at the end of the year.

“Like other central banks, the Fed has thrown out forward guidance,” said Jason Brady, president and CEO at Thornburg Investment Management.

“This move is a breath of fresh air. In an era of uncertainty, we don’t need any central bank locking themselves in to a bad policy move, especially when they are communicating that they are data dependent,” Brady said. “The worst mistake the Fed has made in some time was in the context of refusing to adapt quickly enough to changing circumstances.”

Brady noted it will be challenging for Powell “to maintain consensus in the future given a weakening of the economy with still very strong inflation.”

“Rocking the boat at this meeting has no great purpose,” he said.

Inflation above 9% is a fail, he said, and “they likely — and deservingly — feel like they need to allow themselves to be much more nimble.”

But if the Fed continues to favor data dependency, Brady said, “they will inevitably be reactive and therefore behind.”

Gary Siegel contributed to this report.

California Coastal Living Is A Breeze At Brand New $14.8 Million Estate In Montecito
Is Uber Technologies (UBER) a Buy After Q2 Earnings Announcement?
Stocks making the biggest moves midday: Bed Bath & Beyond, AMC, First Solar, Palantir and more
Want to buy a home? Use this mortgage calculator to determine your monthly payment
Here’s where China’s real estate troubles could spill over