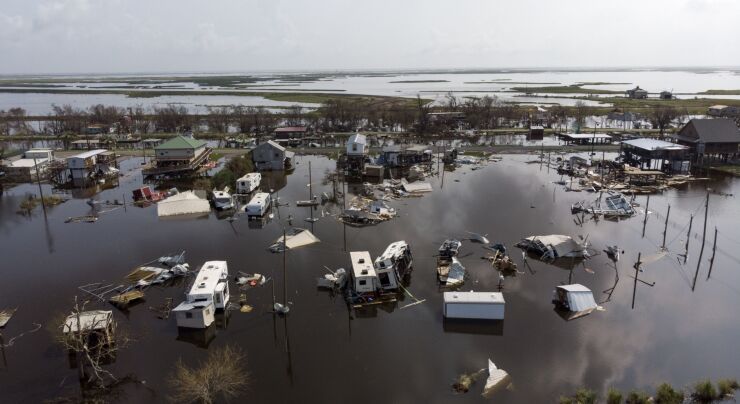 Controversy and contentiousness are nothing new in Louisiana politics and ideology intruded into the financial realm once again as the Louisiana Bond Commission had to come to grips with funding, financing, and politics at last week’s meeting.

While the commission approved up to $1.7 billion of bond issuance for Louisiana Community Development Authority projects at its July 21 meeting, New Orleans’ request for future bonding was put on hold due to the city’s stance on abortion, which contrasts with the state’s position.

The Commission approved the­ Louisiana Community Development Authority’s request for up to $600 million of insurance assessment revenue notes for the Louisiana Insurance Guaranty Association (LIGA). Proceeds from the note sale, which are not to exceed 6% or 12 years, will pay for covered claims of insolvent insurance companies and stock a reserve fund.

Several insurance companies in the state went bankrupt after Hurricane Ida hit in 2021, and they can’t pay residential and commercial claims. LIGA, a private non-profit agency was created by the legislature in 1970, designed as a safety net for consumers if their insurer became insolvent and couldn’t pay their claims. The last time LIGA issued debt was in 1993.

Ida was the fifth-costliest storm on record causing a total of $75 billion in damages, with at least $18 billion of insured losses in Louisiana alone. Ida, which killed 30 people in Louisiana, was the fourth major hurricane to hit the state in two years.

The Commission also okayed the CDA’s request for up to $1.1 billion of revenue bonds for the Louisiana Green Fuels LLC project. The revenue bonds will not exceed 10% fixed- or floating-rates and won’t exceed 30 years.

Proceeds will go toward the development and construction of a bio­refinery plant, a $2.8 billion project, which will convert waste wood biomass obtained from state forests into renewable diesel fuel and other renewable products. It is expected to be located in Columbia, Caldwell Parish. Proceeds will also be used to pay capitalized interest if necessary and fund a debt service reserve fund.

Additionally, the Commission approved for the Jefferson Parish New Orleans Aviation Board’s up to $75 million of a Series 2022 short-term credit facility for the North Terminal project. The facility can’t exceed 10% or five years. Proceeds will go toward refinancing the Series 2017A general airport revenue interim drawdown notes.

However, the Commission delayed a vote on a request for $32.7 million of bond authorization for next year to fund the Sewerage and Water Board’s planning and construction of a power plant costing $106 million.

The U.S. Supreme Court recently overturned Roe v. Wade, ending the federal government’s role on abortion policy leaving the issue to the states. Louisiana moved quickly to tighten restrictions on the availability of the procedures, something that has yet to be decided by the state courts.

The New Orleans City Council earlier this month approved a resolution “to reiterate that equal access to abortion care is essential for social and economic equality and reproductive autonomy, and to condemn any action intended to abrogate the fundamental liberties of the people of the city of New Orleans while affirming the City Council’s commitment to protecting the rights of its residents to make reproductive health decisions, including abortion care.”

The resolution also requests city funds not be used to solicit, catalog, report, or investigate abortions.

At the meeting, Emily Andrews, state Deputy Attorney General, made a motion to delay approval of the project.

“This motion is being made in response to New Orleans adoption of a formal policy to defy state law,” she said. “There’s no question that this act of defiance is unconstitutional under Article 6 Section 9 of our state Constitution, which is out state police power. Yet New Orleans is kind of demanding that there be no consequence for its defiance.”

She said a municipality and a parish can’t disregard state law.

“This is about sending a message that defiance of state law is unacceptable,” Andrews said, adding, the request could be deferred until the next meeting, which she invited New Orleans officials to attend.

Bond Commission Chairman and State Treasurer John Schroder took issue with why a motion of this type was brought up.

“I want to be very clear,” Schroder said. “I’m about as staunch pro-life as anybody within this state. But I also have to manage this department, manage Treasury. We have administrative things and roles that we have to get through.”

Schroder said this was confusing to deal with from a policy perspective.

“This is a bond commission. We deal with the finances of the state,” he said. “And as long as you check the boxes, then those things get approved.”

Louisiana Attorney General Jeff Landry has the option to legally charge or sue the city in a court of law, he said.

“He’s got plenty of tools. That’s his job, it’s not mine,” Schroder said. “You want to send a message, I get that. But I’m just warning everybody that this is a bad, bad road to get on. I do believe that we are playing politics with this. And I don’t like it.”

The final vote to delay action on the funding request was 12-2 to put off the vote. The Commission will now schedule a vote on the request next month.

In response to the Bond Commission’s vote, New Orleans Mayor LaToya Cantrell, a Democrat, blasted the delay in funding for the project.

“It is disappointing and appalling that the Louisiana Bond Commission decided to halt funding for one of the most vital and valuable infrastructure projects, despite the fact that the right to an abortion remains legal statewide,” she said in a statement.

“What also remains is the fact that we are in the middle of another above-average hurricane season in which this city needs its entire Sewerage and Water Board system performing at its peak in order to protect vital assets, businesses and residents from flooding,” Cantrell said.

The funds would be part of the city’s plans to upgrade its water, sewer and power infrastructure. Separately in April, the mayor signed a Cooperative Endeavor Agreement with the  Board to invest $22 million of bond funds to purchase two additional static frequency changers, along with auxiliary power equipment.

“This is action and made possible with city bond dollars approved by residents in 2019,” she said at the time. “With the sale of these bonds and because of our good credit score, this funding will go a long way as an investment right back into the SWBNO. Progress will continue to be made, and we will continue to prioritize improving our aging infrastructure.”

Cantrell last week encouraged the city’s business leaders to call on the Commission and ask them to approve the request.

“Regardless of the outcome, my administration will continue to prioritize the needs of our residents, which includes improving our aging infrastructure, strengthening our resiliency as a city and protecting the reproductive rights of women throughout the city of New Orleans,” she said.

Other cities also tried the same approach as they sought ways to broaden access to abortion procedures when states have curtailed them.

In Texas, the city councils in Austin and Denton passed resolutions to decriminalize abortion within their city limits. However, these resolutions don’t legalize abortion there or give any legal protection against state enforcement actions. A similar effort failed in the El Paso City Council.

Some Texas state lawmakers recently said they will introduce legislation prohibiting any employer in the state from paying for abortion expenses regardless of where the procedure occurs. In the case of law firms with such policies, the legislation would require disbarment from the State Bar of Texas. Also planned for introduction for the next session is a bill forbidding local governments from doing business with any company that pays the abortion-related expenses of its employees.

Abortion is only the latest hot button issue to spur action in the southern states.

Last November, the Louisiana Bond Commission disqualified J.P. Morgan Chase from underwriting a bond refinancing due to unanswered questions about its gun policies.

J.P. Morgan had been chosen originally because it came in with the lowest cost bid, but in October, the commission delayed approval of the sale as the state sought additional information and clarification about J.P. Morgan’s policies on gun control. Wells Fargo, which had come in second in the bidding for the deal,  told the state after J.P. Morgan was disqualified that it would underwrite the bonds at the lower fee.

Schroder noted at the time that J.P. Morgan was only being disqualified from that offering and was not being removed from the state’s list of approved underwriters for negotiated deals. Competitive deals remain unaffected.

The state’s GOs are rated Aa3 by Moody’s Investors Service and AA-minus by S&P Global Ratings and Fitch Ratings.

In Texas, municipal bond underwriters have been operating since last year under a law that bans them from participating in state or local government debt issues if their policies are said to discriminate against the firearms industry.

In Florida, Gov. Ron DeSantis and the Walt Disney Company are sparring over The Parental Rights in Education Act , which bans public school instruction for children through grade 3 about sexual orientation or gender identity. Opponents of the law call it “Don’t Say Gay” and claim the policy will hurt LGBTQ+ children. Supporters counter that it lets parents decide how their young children are taught about LGBTQ+ topics.

Disney came out against the legislation, saying it would fight to have it repealed and the
GOP-dominated state legislature approved a law to dissolve special tax districts starting next year that were created before 1968, notably the Reedy Creek Improvement District, which Disney effectively finances and runs to serve its Orlando-area resorts. In total, Reedy Creek has about $1 billion in debt outstanding. The outcome of that situation remains in doubt.

And then there’s fossil fuel and ESG issues.

In West Virginia, State Treasurer Riley Moore has been standing behind the state’s coal, oil and natural gas industries, which play a major role in the state’s economy.

Moore, a Republican, has sent notices to six financial institutions informing them they could be placed on the state’s “Restricted Financial Institution List” after his office made an initial determination that the institutions appear to be engaged in boycotts of fossil fuel companies.

Senate Bill 262 authorized the State Treasury to create the list, which will consist of financial institutions that have publicly stated they will refuse, terminate or limit doing business with coal, oil or natural gas companies without a reasonable business purpose. The treasurer may exclude banks on the list from eligibility for contracts for state banking services.