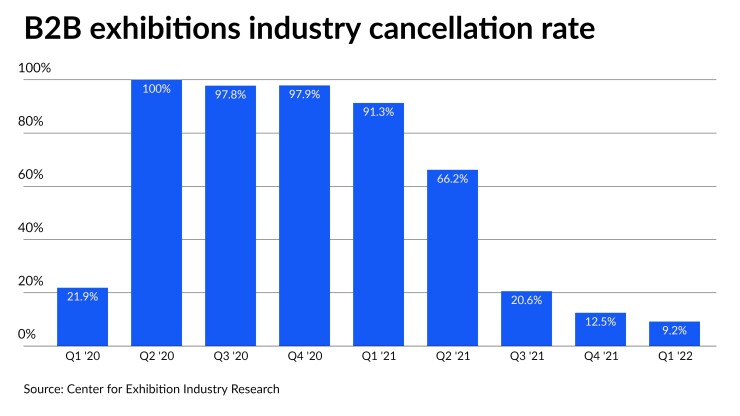 Texas is a hot spot of convention center financing with Dallas, Fort Worth and Austin readying expansion projects on the premise that a bigger venue will attract bigger shows and generate larger revenues and economic benefits.

With the impact of the COVID-19 pandemic — which brought trade shows to an abrupt halt in 2020 — waning, convention centers from coast to coast are dusting off their plans and moving ahead.

“Because hotel occupancy and visitor-based taxes took a serious hit because of the pandemic, in a number of cases expansion proposals and new construction proposals were put on hold,” said Heywood Sanders, professor of public administration at the University of Texas at San Antonio, who studies convention center development. “As those revenues began to rebound, lots of those have started up again.”

The Center for Exhibition Industry Research reported in May that U.S. business-to-business events improved significantly in 2022’s first quarter compared to the previous eight quarters with cancellation rates for in-person shows dropping to 9.2% versus 91.3% during the same period in 2021 and 12.5% in 2021’s fourth quarter.

But attendance had been slipping even before the pandemic forced shutdowns starting in March 2020. Sanders pointed out that the number of attendees at convention and trade shows at the four biggest U.S. convention centers in Chicago, Orlando, Las Vegas and Atlanta, which in aggregate reached a peak of 4.74 million in 2006, was only 3.84 million in 2019.

Regardless, Texas cities are moving forward. Faced with $500 million to $700 million in deferred maintenance, Dallas is planning to tear down the Kay Bailey Hutchison Convention Center, which dates back to the 1950s to the early 2000s.  With 1 million square feet of exhibit space, it hosts about 100 events annually. A new and bigger facility would be built with the expectation that it will nearly double attendance and more than double annual hotel room nights.

A February briefing to the Dallas City Council touted the project as a way to bolster economic growth.

“The taxes, jobs, and economic impact of the convention center provides a strong return on any costs associated with building and operating the facility,” the briefing said.

The current building is very inefficient, according to Rosa Fleming, the city’s director of convention and event services, who added that the new facility will allow for hosting two major events at the same time.

“We can’t do that right now, mostly because we’re upside down on the number of meeting rooms,” she said.

Over 30 years, Dallas would raise about $2.2 billion under a project financing zone (PFZ), which will redirect incremental hotel-associated state tax revenue to the city, and about $1.5 billion from an increase in the city’s hotel occupancy tax.

Hotel guests in Dallas currently pay a 15% tax of which 6% goes to the state and 7% to the city. If approved by the city council next month, a referendum on increasing Dallas’ tax to 9% would be placed on the Nov. 8 city ballot. The increase would put the overall tax rate more in line with other major Texas cities, where it ranges from 16.75% to 17.5%.

The PFZ funds and hotel tax would back about $1.8 billion of revenue bonds, with issuance beginning in 2023 and construction starting in 2024, according to Fleming.

During the pandemic, Fleming said the convention center flipped to public-benefit operations, including homeless sheltering, testing and vaccination clinics, and a field hospital that landed up not being needed. Now, tax and event revenues are getting closer to 2019 levels, she added.

The onset of the pandemic led to negative rating outlooks from S&P Global Ratings in 2020 for dozens of bond issues backed by hospitality-related revenue, including bonds for the Dallas convention center. In October, the outlook on the A-rated Dallas debt was revised to stable ahead of a nearly $233 million refunding bond issuance.

“Despite a significant and material drop in pledged hotel tax revenues caused by disruptions due to the COVID-19 pandemic, revenues are returning to more traditional norms as hotel stays are rebounding from historical lows, which is reflected in the rating and change to stable outlook,” S&P analyst Andy Hobbs said in a statement.

Fitch Ratings has the bonds at A-plus with a stable outlook. In October, it said the rating reflected “an expectation that the city will leverage pledged revenues once revenues recover to maintain coverage near but above the additional bonds test for anticipated improvements to the city’s convention center.”

Fleming said the idea that events were declining across the country depends on the city.

“For Dallas, we have great airports, you can get here cheaper, faster,” she said. “We’re not like a [Las] Vegas, where you’ve got all the other costs attached to it because it’s unionized.”

Nearby Fort Worth is looking to expand beyond its current 253,226 square feet of exhibit space. Last fall, the city council approved $52 million of federal American Rescue Plan Act funds for the first phase of a project aimed at accommodating larger conventions and group meetings that had been shelved with the onset of the pandemic.

“We have the research that says once we have this capacity, Fort Worth can compete with larger venues anywhere to bring more business and visitors,” said Andra Bennett, spokeswoman for Fort Worth’s Public Events Department.

The initial phase, which is expected to commence next summer, will construct new food and beverage facilities, expand the number of loading docks, and realign a street. The next phase, which is dependent on the recovery of culture and tourism tax revenue, will demolish an arena built in 1968, replacing it with new exhibit space, a ballroom and flexible meeting space.

Inflation may impact the cost of the project, which had been estimated at $500 million, according to Bennett.

She said notes backed by hotel occupancy taxes could be issued to help fund phase one, while phase two will involve bonds backed by hotel and venue taxes. The city has about $3.9 million of debt outstanding from previous convention center-related bonds that are expected to be retired in 2026.

“When that’s paid off, it will open up debt capacity for the phase two expansion,” Bennett said.

Austin’s project, which dates back to 2014, currently involves demolishing and rebuilding parts of the convention center reportedly at a cost between $1.2 billion and $1.4 billion.

The facility opened in 1992 and has about 365,000 square feet of space for functions. The last update on its redevelopment website was city council approval in June 2021 for a construction-manager-at-risk contracting method.

A spokesperson for the convention center said there were no new updates and did not answer questions about how the project would be financed or how the current facility has fared since the pandemic.

As of Sept. 30, Austin had $98.34 million of fixed-rate convention center revenue refunding bonds outstanding, according to the city’s fiscal 2021 annual comprehensive financial report. The bonds, backed by hotel and rental car taxes, were rated Aa3 by Moody’s Investors Service and AA by S&P.

Skepticism around a full return to pre-pandemic levels remains. Sanders said pandemic-motivated moves toward virtual or hybrid shows along with the cost and hassle of in-person attendance could further hinder attendance and question the rationale behind expansion projects.

“Is this the right time to do this? My opinion is no,” Sanders said. “I can’t imagine that in the next three to five years, attendance will not be down across a broad array of meetings and for lots of venues.”