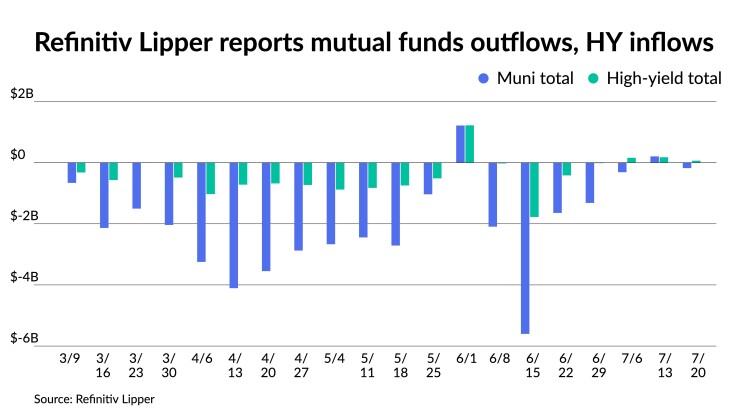 Municipals were weaker on the long end of the curve, largely ignoring the U.S. Treasury rally where yields fell double-digits Thursday, while outflows from municipal bond mutual funds returned. Equities made gains.

Investors pulled $698.782 million out of municipal bond mutual funds, per Refinitiv Lipper data, versus the $206.127 million of inflows the week prior.

“It’s definitely a mixed bag,” said Pat Luby, a municipal strategist at CreditSights, of mutual funds. Mutual funds saw inflows last week but reported outflows for the week ending June 20, while ETFs did the opposite by reporting inflows this week after outflows the week prior.

“It suggests to me that there are income buyers who are out there, looking to take advantage of the higher yields and higher rates, but there remains a lot of anxiety,” he said. “There’s clearly still money exiting mutual funds, money exiting the market, and there’s plenty of headlines that can induce people to either want to exit or to do nothing.”

Luby said the reinvestment demand at the beginning of the month — a “big chunk of money” — helped help support the market.

“But we’re getting into the steamy part of the month,” he said.

The new-issue calendar, he said, is not inspiring excitement among buyers but some of the deals are getting “ridiculous amounts of demand at the short end.” Luby believes this will persist and the market will continue to see outsized demand for short paper and investors will be willing to stomach very tight spreads.

Prints with longer maturities have been light in secondary trading this week. He said the longer-duration spreads are more in keeping with the current market environment. The secondary market, he said, generally trades less consistently and without consistent demand from mutual funds demand component for long duration is low.

Luby doesn’t anticipate a dramatic shift between now and the end of summer, noting new-issue volume will start ticking up in October, which historically has been the heaviest month of the year for new paper. Bond Buyer 30-day visible supply sits at $8.92 billion.

And despite a temporary distraction from summer vacation plans, many buy-side investors are interested in the municipal market and should keep demand healthy for the remainder of the third quarter.

“The overall municipal market should be in good shape going into the third quarter as the massive selloff in the first half of the year has produced a good buying opportunity,” Roberto Roffo, managing director and portfolio manager at SWBC Investment Services, LLC, said Thursday.

“Additionally, a weakening macro-economic environment should make fixed-income investors even more comfortable wading back into the market,” he said.

“It seems the overall tone for the municipal market is one of optimism — especially after the rough first half with most seeing a much better second half of the year in store,” Golden said Thursday.

“Municipals are having one of the better months this year in July and with a little more than a week left it looks like we will get only the second up month for municipals this year,” he added.

He said the municipal market has proven quite resilient over the last few weeks given the Treasury market volatility.

“Valuations, especially on the short end of the curve, have tightened but yield levels are still attractive given the economic backdrop and provide a much larger cushion against continued rate volatility,” Golden said.

To date this year, Golden said there has been an obvious preference for maturities 10 years and in, however, more recently it seems the market has a growing comfort level with longer duration holdings.

“Longer-dated municipal-to-Treasury ratios are still near 100% and look like the cheapest part of the curve,” he said. “If a recession is on the horizon, adding a bit of duration here could pay dividends but we would still be cautious given the Fed has yet to get inflation under control.”

Higher rates seemed to have constrained supply against a backdrop of heavy reinvestment demand and this should be the case into September, he noted

“Overall it seems we could be set up for a much better second half notwithstanding the potential for continued rate volatility,” Golden added. “Credit fundamentals are strong, municipals historically perform well late cycle, the worst outflow cycle on record seems to have ebbed and valuations and yield levels provide an attractive option in a recessionary environment.”

The average seven-day simple yield for all tax-free and municipal money-market funds fell to 0.37%.

The four-week moving average was at negative $530.561 million from negative $766.982 million in the previous week.