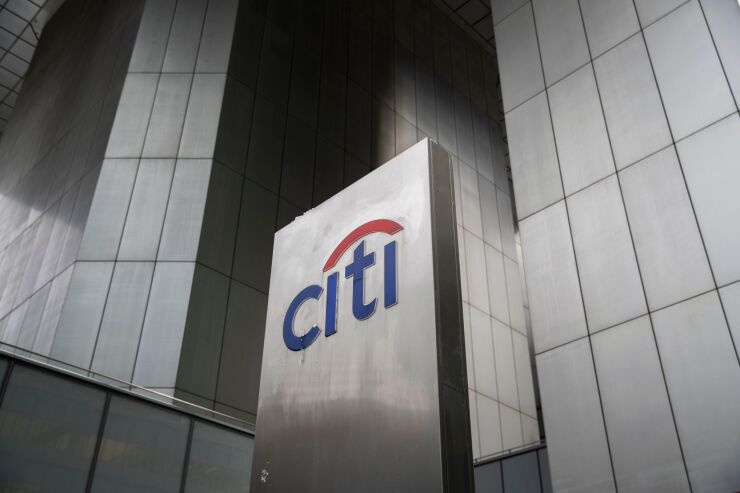 Citigroup Inc.’s municipal-bond business, for decades a powerhouse in the $4 trillion market for U.S. state and city debt, has seen a wave of high-profile departures as the bank revamps parts of the group’s trading and banking units.

The bank in recent months shuttered its muni proprietary trading unit — which used the firm’s own cash to trade and invest — as part of a push to focus on providing more of its balance sheet to larger, institutional clients, according to people familiar with the matter. Citigroup offered buyouts to more than a dozen senior traders, bankers and salespeople, spurring further departures across the group as rivals moved quickly to poach talent.

The New York-based lender had been the nation’s second-biggest municipal underwriter since 2015, but slid to fifth place this year, according to data compiled by Bloomberg. Should it hold, the ranking would be Citigroup’s lowest annual showing since at least 2012. Taken together, the personnel changes and decision to rejigger trading offerings have sparked concern that the bank is taking a step back from its once-storied public-finance business.

“Citi has long been a very significant player across municipal markets and with the breadth of our product offering, client-focused strategy and top industry talent, we are confident about retaining a market-leading position,” Mark Costiglio, a spokesman for Citigroup, said in an emailed statement.

The shakeup began soon after Citigroup held its investor day in March, when executives vowed the bank would renew its focus on higher-margin activities within its trading business and look for ways to better cater to the unit’s largest institutional and corporate clients. That shift came as Citigroup faces higher capital requirements in the coming quarters, creating an even bigger hurdle for improving profitability.

“Our general direction is to increase our relevance to our clients and our profitability,” Paco Ybarra, head of the firm’s institutional clients business, told investors that day. “Of course, we want to retain our leading position and growth share with this opportunity to do so, but only while keeping a close eye on returns.”

Within weeks of the investor presentation, the bank began quietly offering buyout packages to senior bankers, traders and salespeople within the municipal business, some with decades of experience.

The thinking, according to a person familiar with the matter, was that Citigroup didn’t need as many senior staff dedicated to the business as in previous years. But additional retirements and departures have added up in recent weeks as rivals look to poach more of Citigroup’s talent.

Citigroup has sought to make a strong show of institutional support for the business. Last week, as part of a regular visit to the trading floor, Chief Executive Officer Jane Fraser stopped by the muni desk and asked about morale, according to one of the people familiar with the matter. Top trading executives have reiterated to team members in recent months that the bank isn’t cutting risk limits for the business, the person said.

All told, the muni investment-banking and trading arms have seen about two dozen departures in recent months. The list includes Jamie Doffermyre, head of muni sales and a former co-captain of the US Naval Academy’s football team, along with salespeople Marino Lorza and John Leahy. A pair of traders — John Paskalides and Greg Swanson — also left, along with Michael Irwin, a managing director who focused on health-care investment banking, and Guy Logan, a managing director who’s the former chairman of the National Association of Securities Professionals.

Despite the churn, Citigroup has added 15 people across its muni group, most of whom have joined in the banking business, and the firm still intends to be a top-three muni underwriter, according to a person familiar with the matter. The bank is credited with handling nearly $15 billion of long-term muni deals this year, about half of Bank of America Corp.’s tally, according to data compiled by Bloomberg.

Citigroup’s municipal unit is a vestige of retail brokerage Smith Barney, a business the bank sold to Morgan Stanley in the aftermath of the financial crisis. That origin meant it always had a separate culture from the one permeating the broader trading and investment-banking division, which mostly came from Citigroup predecessor firm Salomon Brothers, according to people familiar with the matter.

For years, Citigroup sought to preserve the unique culture inside its muni division, allowing executives to largely operate the business as a separate entity.

That changed in 2018. The firm combined formerly separate divisions focused on credit markets, municipal securities and securitized markets into a new unit it called global spread products. Mickey Bhatia and Joe Geraci were chosen to lead the new group.

Within months, the new structure was hit by high-profile departures, including the 2019 retirement of the unit’s long-time chief, Ward Marsh, after a 45-year career there. Geraci, a 24-year veteran of the bank, announced he was leaving last year.

The changes at the bank come amid a dismal year for the muni market. The bonds have lost nearly 8%, putting them on track for the worst year of performance since the 1980s, according to Bloomberg index data. With interest rates rising, issuance from states and cities has fallen about 10% this year, according to Bloomberg data, pinching underwriters.

Citigroup’s revenue from trading spread products and other fixed income dropped 11% last year to $4.81 billion, threatening the paychecks of anyone in that business. Revenue from the unit has already tumbled 24% in the first six months of this year.

In recent years, Citigroup has sought to focus on larger muni transactions as well as advisory services, such as its work with the US commonwealth of Puerto Rico during its bankruptcy. Those deals are often more complex, making them more profitable.

The muni business faced a blow late last year after Republican politicians in Texas sought to punish Citigroup for recent changes to its policies for lending to gun retailers. After a months-long pause, the bank resumed underwriting in the state — the second-biggest market for muni deals — in November. Still, it’s seen an exodus of bankers based there.

The business of arranging financing for the nation’s municipalities is often relationship-driven, with local finance officials tending to tap bankers that they’ve worked with for years on bond sales. That means the Texas turnover — and the broader loss of senior bankers with decades of experience — may complicate Citigroup’s efforts to climb back up the underwriting ranks.