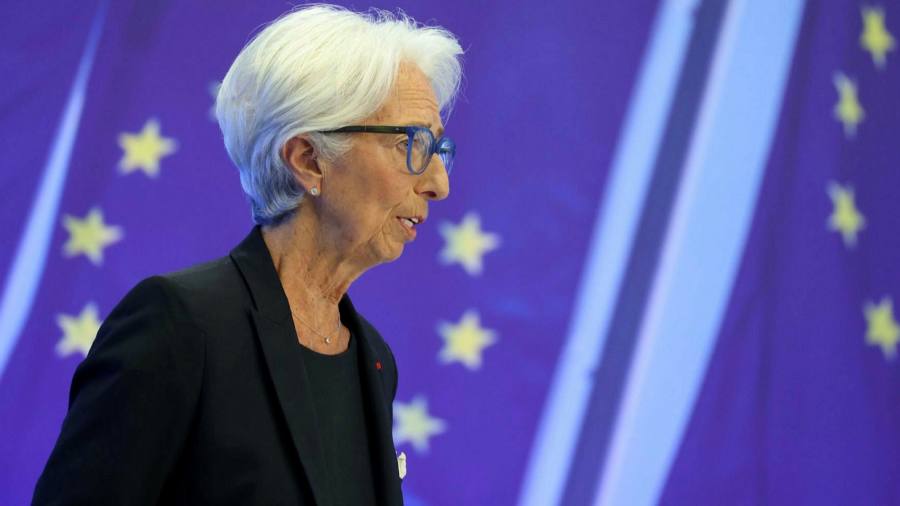 The European Central Bank has raised interest rates by half a percentage point — its first increase for more than a decade — while pledging to prevent rising borrowing costs from sparking a eurozone debt crisis amid political turmoil in Italy.

The central bank increased interest rates by twice as much as it said it would only last month, ending eight years of negative rates by raising its deposit rate to zero.

Christine Lagarde, ECB president, said on Thursday afternoon it was “time to deliver” after eurozone inflation hit a fresh record high of 8.6 per cent in the year to June, more than four times the central bank’s target of 2 per cent.

Policymakers simultaneously agreed a new bond-buying programme aimed at countering a disorderly surge in the cost of borrowing for the region’s more vulnerable governments. “The ECB is capable of going big,” Lagarde said, later adding: “We would rather not use [the new programme], but if we have to use it, we will not hesitate.”

The ECB has had to tread a narrow path between responding to inflation and avoiding dragging the region into a recession. The bloc has already been hit by soaring energy and food prices following Russia’s invasion of Ukraine, a slowdown in business activity and a drop in consumer confidence to record lows. The ECB decision came hours after Mario Draghi resigned as Italy’s prime minister. His planned exit is expected to trigger early elections this year.

Krishna Guha, head of policy and central bank strategy at US investment bank Evercore, said before Thursday’s decision: “The combination of a brewing giant stagflationary shock from weaponised Russian natural gas and a political crisis in Italy is about as close to a perfect storm as can be imagined for the ECB.”

The ECB has been slower than most central banks to respond to surging inflation and is lagging behind the US Federal Reserve, which is next week expected to raise rates by at least 75 basis points, matching a similar-sized move last month.

The euro initially popped on the ECB’s announcement but later trimmed its gains against the dollar to trade at $1.019. Carsten Brzeski, head of macro research at Dutch bank ING, said investors were absorbing the likelihood of the ECB raising rates less than expected in the future after it “weakened its guidance from before” by shifting to a “meeting-by-meeting approach to interest rate decisions”.

Lagarde said the discussions within the bank’s governing council had evolved around a trade-off between the need to tackle inflation pressure with a bolder rate rise, while designing a new bond-buying scheme that would prevent eurozone spreads from widening for reasons other than those justified by economic fundamentals.

The size of bond purchases under the new programme, the “transmission protection instrument”, or TPI, had “no limitation”. said Lagarde. It was aimed at ensuring that the central bank’s monetary policy stance had the desired impact across the eurozone.

While support for the programme was unanimous, there was only a “consensus” on the scale of the rate increase.

The political turmoil in Rome has raised concerns about how rising interest rates will affect the sustainability of Italy’s public debt at 150 per cent of gross domestic product.

Italian debt sold off on Thursday, with the yield on the country’s 10-year government bond jumping 0.24 percentage points to 3.6 per cent as Draghi’s national unity coalition unravelled and the ECB raised rates. The decline in Rome’s bond prices meant that the gap between Italian and German benchmark yields — a closely watched gauge of market stress — yawned to 2.3 percentage points, reflecting a widening of about 0.3 percentage points in just two days.

The last time the ECB raised rates, under then president Jean-Claude Trichet, it was forced to reverse the move a few months later as the eurozone was gripped by a sovereign debt crisis.

The central bank said rates would rise further in future meetings, adding: “The front-loading today of the exit from negative interest rates allows the governing council to make a transition to a meeting-by-meeting approach to interest rate decisions.”

Lagarde said there remained “upside risks” to inflation — code for the possibility that price pressures could remain stronger than the ECB’s forecasts suggest.

The last time it raised rates by half a percentage point was in June 2000, just over a year after the euro’s launch.