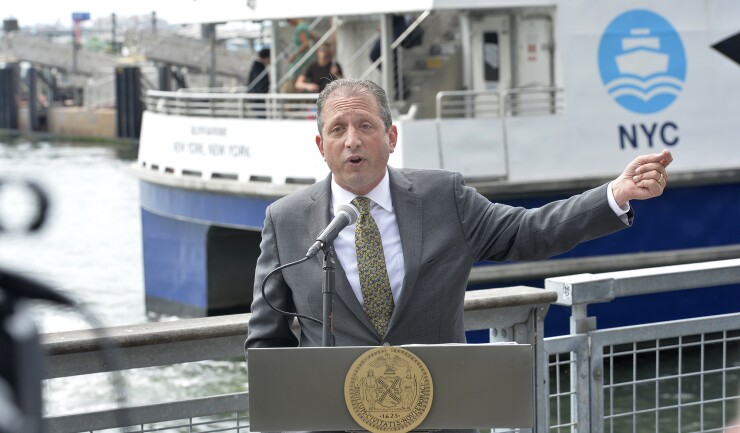 Rising inflation and falling stock prices are getting ready to take a big bite out of the Big Apple’s economic recovery.

According to a report released this week by New York City Comptroller Brad Lander, June’s personal income tax data are showing the effects the sagging stock market and volatile bond market are having on city tax collections.

June’s estimated payments were 31% lower than in 2021, dropping to the lowest level since 2017. The payments are closely tied to capital gains realizations and are hurt as Wall Street falters.

On the other hand, personal income tax collections were 5.1% higher year-over year, “primarily due to withholding revenue, or taxes withheld from monthly wage earners, which were 13.2% higher than in the previous year,” the report said.

While withholding growth has been boosted by employment and nominal wage gains, the report noted these gains are likely to dissipate as economic growth slows and a decline in Wall Street bonuses is forecast for the year.

The S&P 500 is down more than 20% since the start of the year, reflecting a broad decline in equities.

Wall Street is the engine the drives the city’s economy. When it sputters and slows it can have wide ranging repercussions far beyond a single month or fiscal quarter.

There were a number of good points and concerns raised in the comptroller’s report, Howard Cure, director of municipal bond research at Evercore Wealth Management LLC, told The Bond Buyer.

“Since the beginning of the year, there has been a decline in both the equity and fixed-income markets. Besides a loss in capital gains receipts, which has a large impact on the city’s personal income tax collections, declines in financial markets has a direct impact on financial service industry employees and their compensation,” he said. “Will the city have to change its revenue estimates based on the declining market?”

He noted the economic uncertainty that is facing the city.

“What is the impact of inflation and rising interest rates on the city’s operating and capital budget? Specifically, there will be a decreasing ability to refinance debt for savings which, in the past, has shown to generate significant budgetary benefits,” Cure said. “There will also be an increase in the cost of borrowing, construction and materials, all of which will increase capital expenses. How is the city factoring in inflationary raise increases as they negotiate new labor contracts?”

On Friday, Wells Fargo said its mortgage-banking income fell 79% in the second quarter. This came after J.P. Morgan Chase said Thursday that its quarterly profits fell 28%. Morgan Stanley also missed its earnings estimates as the firm’s investment-banking saw a 55% drop in revenue in the second quarter.

Wells Fargo is one of the firms that have been laying off staff in its mortgage division, Bloomberg News reported. At the end of the second quarter, total headcount is down to 243,674 from 246,577 at the end of the first quarter.

How all this will affect the city’s longer-term rebound is also a question as work from home and hybrid office work becomes the norm and challenges property tax and personal income revenues.

“Generally, what is the continued demand for commercial/office space given changes in consumer behavior (people buying on-line) and workers not required to come into the office five days a week,” Cure said. “Can some of this real estate be refashioned for residential use? What impact will this have on the city’s property tax base if this transition is, in fact, possible?”

According to the report, New York City lost more than 4,000 private establishments, such as storefronts and other business locations, from 2019 to 2021. Manhattan lost 5,266, while Brooklyn gained 1,267 and the other three boroughs saw modest changes.

Rental inventory rose slightly in May. However, inventory is down 46% in the past year.

Office occupancy began to rise at the start of June and then flatlined for rest of the month, according to data from Kastle Systems, which runs access control systems for office buildings. Office occupancy averaged 41.8% last month, up from an average of 37.9% in the prior five weeks.

Wall Street’s woes also have an outsize effect on the state’s budget.

PIT revenues are reliant upon taxpayers continuing to be taxpayers, and remaining residents of New York and according an analysis done by the comptroller’s office more taxpayers moved out of the state than moved in each year from 2015 to 2019.

“While this occurred at every income level, the number of taxpayers with incomes over $1 million that left the state were nearly double those that moved in,” the analysis showed.

In April, New York Gov. Kathy Hochul and the state Legislature agreed on a $220 billion budget for fiscal 2023, up from the original $216.3 billion executive budget the governor proposed in January.

The city comptroller’s report also noted the city’s central treasury balance, which contains the funds available to be spent, stood at $8.961 billion as of June 30. This compares to $8.5 billion at the same time last year. The city began the third quarter of fiscal 2022 with $6.513 billion in cash.

The budget was up from the $99.7 billion executive budget proposed in April by Mayor Eric Adams, primarily because a record level of Wall Street activity had driven up personal income taxes to higher-than-expected levels, allowing the city to revise its forecast up by about $3 billion for fiscal 2022 and around $1.5 billion for fiscal 2023.

These added revenues allowed the city to increase reserves to a record level of $8.3 billion while decreasing the fiscal 2023 budget gap by prepaying expenses. The city’s fiscal year began on July 1.

New York City is one of the biggest issuers of municipal bonds in the nation. As of the first quarter of fiscal 2022, the city had about $38.13 billion of general obligation bonds outstanding.

The city’s GO bonds are rated Aa2 by Moody’s Investors Service, AA by S&P Global Ratings, AA-minus by Fitch Ratings and AA-plus by Kroll Bond Rating Agency. Fitch assigns a positive outlook to the city while Moody’s S&P and Kroll assign stable outlooks to the credit.