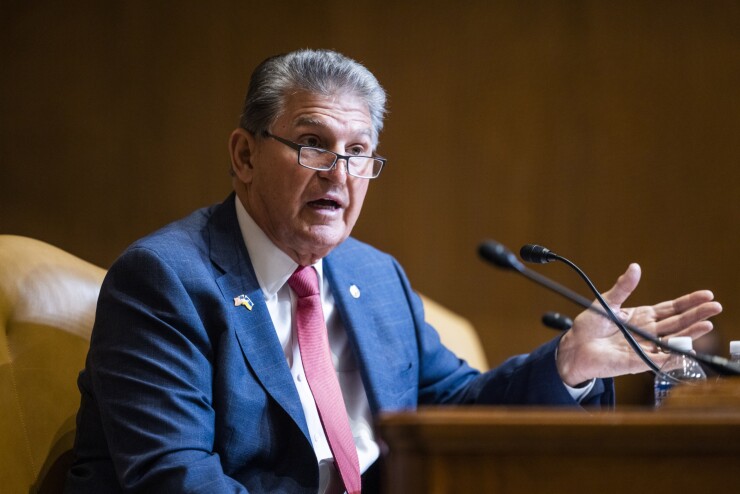 West Virginia Sen. Joe Manchin has dealt President Biden and the Democrats’ Build Back Better bill a final blow, refusing to accept key tax and climate provisions and destroying any hope for reviving the muni market agenda before elections in November.

Senate Majority Leader Chuck Schumer, D-N.Y., had been negotiating with fellow Democrat Manchin for months over the terms of a significantly pared-down spending package that could’ve helped Democrats with a small win before November’s midterm elections. But Manchin’s concerns over inflation ultimately tanked the bill.

“Political headlines are of no value to the millions of Americans struggling to afford groceries and gas as inflation soars to 9.1%,” said Sam Runyon, spokeswoman for Manchin. “Senator Manchin believes it’s time for leaders to put political agendas aside, reevaluate and adjust to the economic realities the country faces to avoid taking steps that add fuel to the inflation fire.”

The bill was President Biden’s and Democrats’ long-debated three pronged agenda, which consisted of billions to fight climate change, increased taxes and lowered drug costs. That Manchin couldn’t back the tax and climate provisions does leave a path for lower drug costs, which is expected as a standalone reconciliation bill in August.

“We know what we can pass is basically the drug pricing on Medicare,” Manchin told reporters on Wednesday. “We know that one.”

Build Back Better has gone through many iterations since Biden took office, with key muni provisions such as the restoration of tax-exempt advance refunding, expansion of bank-qualified debt and a direct-pay bond program included in the bill for about six weeks in September and October 2021.

Muni market advocates have continued fighting for these priorities since they were cut in late October. In most recent efforts, lobbyists were pushing for expanding the bank-qualified debt limit to $30 million from $10 million. That has been a muni priority for more than a decade and is considered one of the more achievable goals sought by market advocates.

“If there is any tax title, what’s the easiest, low hanging fruit? Well, it’s bank-qualified,” Emily Brock, director of the federal liaison center at the Government Finance Officers Association said at the time. “That could be an easy and big win for the municipal space.”

But it may not be all bad news for the muni market. Manchin putting an end to the tax and climate provisions stamps out any hope of advancing these priorities in the foreseeable future, but it also puts an end to the immediate possibility of a federal corporate alternative minimum tax, which muni market lobbyists called an “oversight” that could hurt institutional demand for the tax exemption.

“It’s unfortunate that this potential, albeit slim, opportunity for the muni agenda appears to be gone,” said Chuck Samuels, member at Mintz Levin and counsel to the National Association of Health & Educational Facilities Finance Authorities. “Hopefully, that also means that proposals for new corporate minimum taxes which might include municipal bond interest are also gone.”

“Munis were still on the outside looking in but this was a slight opportunity,” said Brett Bolton, vice president and head of government and industry relations at Bond Dealers of America.

He’s looking ahead to the lame-duck session following the election, which could provide another opportunity for Democrats to advance a spending package.

“Democrats, regardless of the outcome of November’s election, will be looking to get some kind of spending package done, especially now that Build Back Better has been given a final blow,” Bolton said. “I think that provides a slight opportunity to get some muni type provisions included if that bill does proceed in the November, December timeframe.”