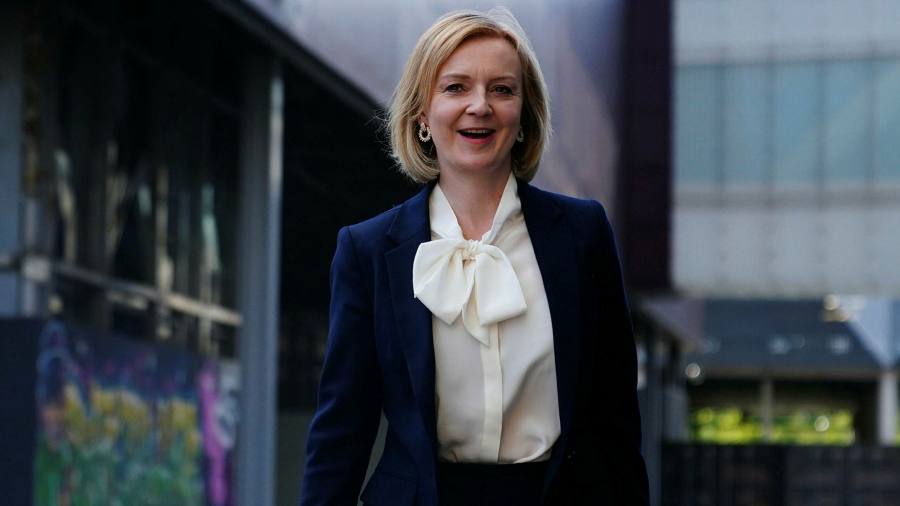 Foreign secretary Liz Truss has signalled that she would tighten ministerial scrutiny of the Bank of England if she were to win the race to become the next UK prime minister after accusing it of failing to get to grips with spiralling inflation.

Truss, the foreign secretary, told the Sunday Telegraph newspaper that she would “look again” at the central bank’s mandate to “make sure it is tough enough on inflation”.

The BoE has been operationally independent since 1997. The government has charged it with aiming for an inflation target of 2 per cent. Inflation is presently at 9 per cent, far beyond that goal.

Truss hinted that she could interfere with the bank’s independence, saying that she would — as prime minister — want to set a “clear direction of travel” for it on monetary policy.

Many Tory MPs have blamed the BoE for losing its grip on prices, after it insisted that higher inflation would only be temporary and would peak at 5 per cent — despite the global fuel crisis.

Truss, who struggled in Friday’s first televised leadership debate, is fighting to make it to the final two candidates on a shortlist that will — by the end of next week — be put before the Tory membership.

In an attempt to appeal to rightwingers, the foreign secretary has pledged £30bn of largely unfunded tax cuts and promised to cut red tape.

The Truss campaign has suggested there is “headroom” of about £30bn in the public forecasts with taxes likely to come in higher than expected. So too has Tom Tugendhat, seen as the outsider in the final shortlist of five candidates.

But Paul Johnson, head of the Institute for Fiscal Studies, said that “anyone serious about meeting these (Britain’s fiscal) targets” would not believe there was £30bn of spare money to spend.

Truss also said she wanted to lift the ban on fracking for oil and gas in the UK, leaving local areas to decide whether they wanted the contentious practice to go ahead.

Rishi Sunak, meanwhile, sought to emphasise his credentials as a Brexiter as he promised to spend his first 100 days as prime minister working out which of 2,400 legacy EU rules should be axed. The government is already planning a “bonfire” of old European laws, but Sunak said he would accelerate the process.

The former chancellor’s team has been dismayed by the way that Eurosceptic Tory MPs have been flocking to Truss — even though she voted for Remain six years ago — and Penny Mordaunt, trade minister.

Sunak pointed out that he campaigned for Leave, unlike others, despite being warned that it would be terminal for his political career. “As prime minister I would go further and faster in using the freedoms Brexit has given us to cut the mass of EU regulations and bureaucracy holding back our growth,” he said.

Polling by JL Partners found that Sunak was the overwhelming choice of voters in most key target constituencies for the Conservative party. In the 365 seats won by the Tories in 2019 Sunak was the favourite in 76 per cent, with Mordaunt on 5 per cent and Truss on zero. Tugendhat came in at 19 per cent with Kemi Badenoch, the fifth candidate, at zero.

Mordaunt told the BBC on Sunday morning that she wanted to cut value added tax on petrol from 20 per cent to 10 per cent while also raising basic middle-income tax thresholds. The minister argued that the VAT cut would be fiscally neutral because there would be additional revenues into the exchequer from higher fuel sales.

Mordaunt admitted that the policies would mean adjustments to government tax receipts but said there was an urgent need for interventions to help people hit by the rising cost of living.

Dominic Raab, deputy prime minister, sounded sceptical about the claim that halving VAT on fuel would be self-funding: “I’d like to see a serious analysis of self-funding tax cuts,” he told Sky News.

One Labour official said the claim was “nonsensical” because it implied that people would buy twice as much petrol as before. Instead it was likely to cost more than £8bn, he suggested.

Tugendhat, the most centrist candidate, said he would not drop out ahead of the third ballot on Monday, saying: “I have never turned down a challenge because the odds were against me.”

Alok Sharma, the cabinet minister who led last year’s COP26 international climate talks in Glasgow, said he would not rule out resigning if the new prime minister scrapped the target to cut carbon dioxide emissions to net zero by 2050. Sharma accused some candidates of being “lukewarm” about the climate agenda, telling the Observer newspaper: “Anyone aspiring to lead our country needs to demonstrate that they take this issue incredibly seriously.”