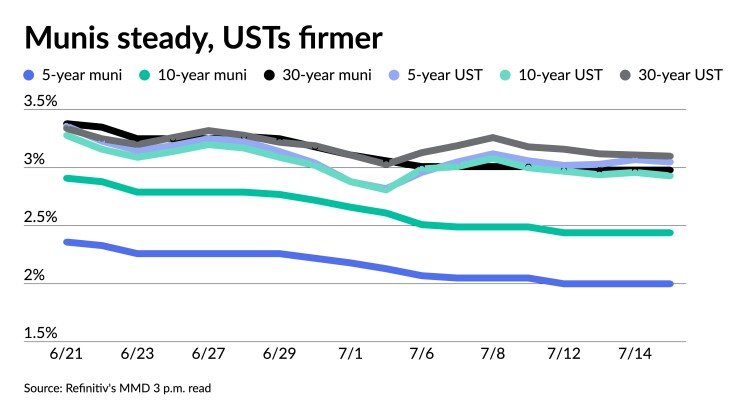 Municipals were little changed to close out the week, while U.S. Treasury yields fell slightly and equities rallied.

Investors will be greeted Monday with a decrease in supply, with the new-issue calendar estimated at $7.26 billion.

Massachusetts’s $2.7 billion of taxable business-tax-backed special obligation revenue bonds with a social designation was initially set to price next week, but the sale has been pushed until August.

The Massachusetts House of Representatives introduced legislation earlier this week that proposes allocating $300 million to the Unemployment Insurance Trust Fund, but as of Friday, the House hasn’t acted on the legislation, leading to the sale being postponed.

The deal marks the largest environmental, social and governance deal to date in the municipal market and is one of the larger taxable deals this year.

Municipals fared well the past week, digesting a large new-issue calendar amid big economic indicator releases that moved other markets.

While USTs have been rather volatile the past several weeks, Barclays strategists Mikhail Foux, Clare Pickering and Mayur Patel said high-grade tax-exempts have been “seemingly well-anchored, supported by heavy bond redemptions, low supply and slowing outflows.”

Last week, munis gained ground on USTs when they sold off, but this week they were mostly underperforming when Treasuries rallied, they noted in a weekly report.

At current ratios, munis are far from cheap, and have lost some of their appeal, they said.

“The front-end is simply rich, the belly of the curve close to fair value, and only the long end still has some potential,” Barclays strategists said. “Hence, much will depend on rates, but as global economies have been slowing while the Fed still aggressively tries to bring inflation under control, the upside in yields is likely limited.”

This week’s well-above consensus consumer price index and produce price index prints increased the likelihood of a 75 basis point rate hike in July, according to Barclays.

“Moreover, according to fed fund futures, a 35% probability of a 100 [basis point] move next week is priced in, and a 150 [basis point] combined over the next two meetings is fully priced in,” the report said. “The futures also imply that the Fed will start easing in February-June of next year.”

“Such an environment bodes well for the muni rates curve to bull flatten,” BofA strategists said.

The muni curve bear flattened in the first quarter, followed by a “scathing bear steepening” in the second quarter after the Fed announced its quantitative tightening intentions, they noted.

“In June, the general view switched from ‘the Fed is behind the curve’ to ‘the Fed will nail down inflation and cause a recession” after the 75 basis point hike, Li and Rogow said.

This week’s muni performance “has been quite important, as supply has finally tested the muni market and, for the most part, high-quality bonds have been positively received by investors,” Barclays said.

“Issuance will likely stay heavy through July and early August, as the 30-day visible supply is still elevated for both taxable and tax-exempts,” they said.

Barclays strategists said they aren’t concerned about “the lack of appetite from investors as cash cushions of mutual funds are still sizable, while direct retail should continue to see good value in tax-exempts at current yields, especially in high tax states.”

While issuance will likely come in above average this month, they still anticipate “negative net issuance supported by heavy July coupon payments and redemptions.”

Treasuries were steady to firmer in spots.

The Metropolitan Government of Nashville, Tennessee, (Aa2/AA/) is set to sell $286.325 million of general obligation improvement bonds, Series 2022B, at 11:30 a.m. eastern Wednesday.

The Metropolitan Government of Nashville, Tennessee, (Aa2/AA/) is set to sell $334.045 million of general obligation improvement bonds, Series 2022A, at 11 a.m. Wednesday.