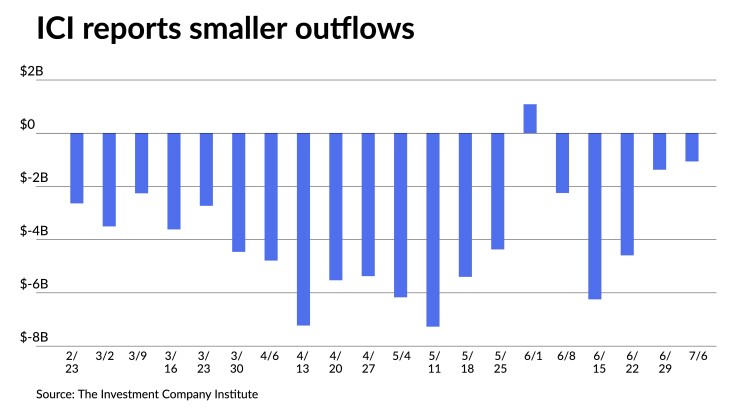 Municipals were little changed in secondary trading, as eyes turned toward the primary market’s large revenue deals from the New York State Thruway Authority and the Colorado Health Facilities Authority.

The 2/10 U.S. Treasury curve significantly inverted after the June consumer price index report came in hotter than expected at 9.1%, further stoking recession fears and leading some analysts to say a 100 basis point hike could be on the table. Equities ended in the red.

The Investment Company Institute reported investors pulled $1.061 billion from muni bond mutual funds in the week ending July 6 compared to the $1.369 billion of outflows in the previous week.

Exchange-traded funds saw inflows at $916 million versus $690 million of inflows the week prior, per ICI data.

The municipal market was quiet in the secondary and focused on the primary Wednesday, letting the news of CPI shake out elsewhere.

“Leading into this week, market participants were determined to seek direction from the much anticipated CPI for June,” Jeff Lipton, managing director and head of municipal credit and market strategy and municipal capital markets.

“Prior to Wednesday’s print, retail participation was quite active with a firming market tone,” he added.

“Today’s CPI report surprised to the upside, with June’s inflation catapulting to its highest level in 40 years at 9.1%, surpassing market expectations of 8.8%,” said Greg Bassuk, CEO at AXS Investments.

But while inflation is above 9%, James Knightley, ING chief international economist, said it’s “the breadth of the price pressures that is concerning for the Federal Reserve.”

“With supply conditions showing little sign of improvement the onus is on the Fed to hit the brakes via higher rates to allow demand to better match supply conditions,” he said, noting the recession threat is rising.

This likely translates into a three-quarter rate hike in July with half-point moves in September and November, followed by a quarter hike in December taking the Fed funds range to 3.50%-3.75% by year-end, Knightley said.

Recent weeks, he noted, “have seen near-record market outflows in stocks and bonds, while bearish sentiment indicators have been high.”

“That’s an exceedingly reflective preview of how July markets may behave as this high-price environment continues to dominate the U.S. and global markets,” Bassuk said.

“There are small pockets of interest out there, however,” Tom Kozlik, head of municipal research and analytics at HilltopSecurities Inc., said of municipals.

Kozlik expects supply to likely continue to be down in July — and for all of 2022 for that matter — a “fitting” match for the current market tone.

“That being said, I am still seeing neutral to positive technical indicators,” albeit not as strong as mid-May, he said.

But, some investors are putting money to work, according to Kozlik, who believes municipals are still investible — despite the expectation that rates are going higher.

“It is not just whether there will be a 75 point hike in July, I think some may expect there is a chance — even if it is small — that the Fed goes even higher, faster,” Kozlik said.

After last Friday’s jobs number and Wednesday’s CPI number, Kozlik said most market participants are expecting the Fed to continue its push to higher rates.

“This argument may have gained strength today — especially because the BoC just tightened by 100 basis points,” he said.

CPI on fire; Some say 100bp hike possible
Wells Fargo Securities senior economist Sarah House and economist Michael Pugliese said, “It will take at least several consecutive monthly inflation readings of slowing price growth for the Federal Reserve to start to believe that it has the current inflation episode in check.”

But today’s CPI release, they said, “offers monetary policymakers zero reassurance that they are on that path at present.” A 75 basis point rate hike at the upcoming Federal Open Market Committee meeting in late July “appears to be the floor rather than the ceiling for what the central bank will do to combat this relentless price pressure,” they said.

Olu Sonola, head of U.S. regional economics at Fitch Ratings, echoed their thoughts. “The 9.1% headline print was higher than expected — a pandemic peak that solidifies the case for another 75 basis point increase in the Fed funds rate later this month,” he said.

“While core inflation continues to show signs of moderation, with the lowest year-over-year increase in six months,” Sonoloa said “the sharp pickup in energy inflation was the primary catalyst for the elevated print.”

However, he said “the recent 20% pullback in the price of oil is sustained, it bodes well for the future trajectory of energy inflation and the headline print.”

“The pace of core services inflation, which tends to be a lot more sticky, continues to accelerate, which will not be reassuring to the Fed at all,” Sonola said. “In fact, it will be sobering. It may move the Fed into even more hawkish territory.”

The CPI print “is not what the Federal Reserve wanted to see,” said Andy Sparks, head of portfolio management research at MSCI.

“Accelerating inflation puts more pressure on the Fed to aggressively raise rates — perhaps even by 100 basis points — at its July meeting and to regain its credibility in being able to control inflation,” he said.

But, he said, “placing too much emphasis on today’s CPI, the Fed runs the risk creating a sense of panic” and “runs the risk of overshooting and pushing an economy that had been showing signs of weakness into a full scale recession.”

“A consistent, transparent and credible policy is ultimately what market participants are looking for from the Fed,” Sparks noted.

KC Mathews, executive vice president and chief investment officer at UMB Bank, noted “the Fed will continue to aggressively hike rates, getting short rates to 3.50% to 3.75% by the end of the year.”

This swift Fed action will curb inflation, he said, but it “puts economic activity at risk increasing the probability of a recession late this year or early in 2023.”

“There are clear signs of an economic slowdown, which will dampen price pressures and help the Fed with its mission to curb inflation,” he added.