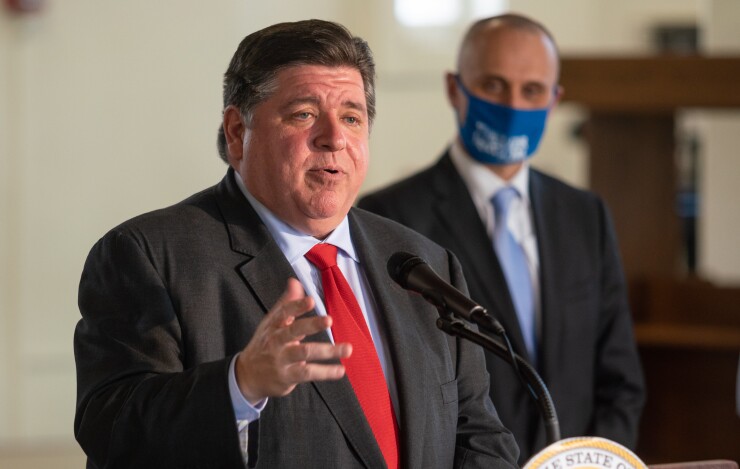 Several Midwest states closed the books on fiscal 2022 this month with robust, even record-breaking revenue windfalls that swelled throughout the year.

Illinois, Minnesota, and Ohio were among the states that ended the fiscal year on June 30 with flush coffers that exceeded projections — which in some cases had been lifted several times over the course of the fiscal year. Each state also warns that it is proceeding cautiously when it comes to the current fiscal year. Michigan, which closes its fiscal year Sept. 30, also has revised revenue estimates up multiple times.

The picture from the three Midwest states tracks with their counterparts across the nation.

“State revenues have continued to perform better than was expected earlier in the pandemic, with tax collections coming in ahead of budget projections in nearly all states for both fiscal 2021 and fiscal 2022,” the National Association of State Budget Officers said in its Spring 2022 Fiscal Survey of States published in June.

Booming revenues fueled tax cuts, rainy day deposits, and a pay down of pension obligations. Governors proposed net tax cuts that would reduce revenue in fiscal 2023 by an estimated $15 billion nationally, NASBO said, including a $14.1 billion reduction in general fund revenue. Rainy day balances continued to grow on top of a 62 % lift in fiscal 2021.

Illinois
Illinois closed fiscal 2022 with $51.07 billion in general fund revenue, up $6.7 billion from May 2021 estimates used to craft the budget and $1.88 billion from the last revenue estimates offered in April 2022.

Base general fund revenues were up $8 billion from last year’s estimates and $2.65 billion from the last revised April 2022 estimates, with the final figures reduced by subtracting one-time federal American Rescue Plan Act reimbursements.

Illinois June base receipts beat projections by $730 million, which “caps off a sensational fiscal year of revenues,” the Commission on Forecasting and Accountability’s revenue manager, Eric Noggle, wrote in the legislative agency’s June report review published last week that offered a deep dive into fiscal 2022.

During the year, the budget office and COGFA raised estimates as the economic recovery strengthened, but the state still finished the year up $1.88 billion from the budget office’s last revisions made in April as revenue predictions were tougher to hit the mark on “amidst the uniqueness of this pandemic period” and “its disruptive effect on normal receipt patterns,” COGFA said.

Those factors impacted a pandemic shift from nontaxed service- based sales to taxable goods, and strong market conditions as a result of this enhanced activity created elevated taxable income and tax revenues from corporate profits and capital gains.

“The influence of these particular factors is expected to wane as the state enters into FY 2023 resulting in reduced revenue expectations for the upcoming fiscal year,” the report warned.

Personal income taxes finished the year “a whopping” $2.3 billion over fiscal 2021 on a net basis while net basis while corporate taxes rose $1.8 billion net and sales taxes “were just as impressive, with year-over-year growth in net receipts of $866 million,” the report said.

Illinois Gov. J.B. Pritzker and legislative leaders have no immediate plans for the new surplus. The $46.5 billion general fund fiscal 2023 budget adopted this spring factors in the view that revenues are expected to taper.

“These additional revenues contributed to an end of year accounts payable level lower than previously forecasted and contributed to the improving fiscal situation of the State as noted by the Governor and Comptroller in their year-end comments,” said state budget office spokeswoman Carol Knowles. “As a result, the state is even better positioned heading into the new fiscal year as we continue to monitor the national economic outlook. At this point, there are no plans to amend the FY2023 budget, which was built on a revenue forecast from April.”

Along with the fiscal 2023 budget, lawmakers this spring adopted revisions to fiscal 2022 that make supplemental contributions toward the state’s mammoth $139.9 billion of unfunded pension liabilities, bring the once-barren rainy day fund up to $1 billion, and pay down bills. The state entered fiscal 2022 with its bills being paid on a routine payment cycle.

The state won a round of bond rating upgrades in the spring in recognition of efforts to chip away at several of the state’s chronic fiscal pressures.

“A significant surplus and a zero-day payment cycle mean that our schools are funded, our roads are being rebuilt, and our healthcare providers are paid on time,” Pritzker said in a statement at the start of the new fiscal year.

Net receipts from all major taxes exceeded the forecast with final quarter results up 29.5% from the February forecast, according to Minnesota Management and Budget’s quarterly revenue and economic update published Monday. For the year, individual income taxes came in 16.5% higher than the February forecast and corporate franchise taxes 18.4% while general sales taxes were just 1.3% over forecast.

The state expects some of that additional revenue collected will go toward tax credits and tax refunds.

“We believe that at the close of fiscal year 2022, state revenues associated with tax year 2021 are at least $1 billion over forecast,” reads the report. The books are not formally closed on fiscal 2022 until Aug. 20.

State finance and economic officials have cautioned that the outlook is clouded by inflation and the Russian invasion of Ukraine that poses new geopolitical risks while the course of the COVID-19 pandemic could also put a dent in the rosy figures.

“Overall, we are seeing some evidence in Minnesota’s tax revenues that is consistent with a slowing economy. Also, since February our national forecasters have consistently lowered their expectations for U.S. economic growth in 2022-2025, and they say the risk of a recession beginning in the next 12 months is increasing,” the report reads.

The state is operating on a two-year budget adopted last year. Its annual November forecast will set the stage for work on the next biennial spending plan in 2023. The state’s February forecast had projected a $9 billion surplus through fiscal 2023.

Efforts to pass the state’s biennial bonding package and matching dollars needed to leverage federal infrastructure dollars as well as billions in tax relief stalled before the legislature mandatory adjournment May 23. Democrats and Republicans remain at odds and Gov. Tim Walz has said he won’t call a special session until an agreement is reached.

Ohio
Ohio closed out fiscal 2022 with $28.15 billion of general revenue compared to an earlier estimate of $25.4 billion. The final numbers, after spending, raise the ending funding balance to $5.66 billion compared to $4.72 billion at the start of the year, according to the state’s monthly financial update published Monday.

The state has authorized potential and non-recurring expenses of $3.5 billion for economic incentives, capital spending, and road projects that would tap the fund balance this year.

Ohio flush coffers moved it closer to a triple-A rating last summer when Fitch Ratings lifted the outlook on its AA-plus rating to positive. The rating agency cited “Ohio’s sustained trend of balanced finances and growth in reserves that strengthens the state’s financial resilience as it confronts cyclical economic and revenue trends.”

“Economic forecasters now expect national economic growth to moderate compared to their earlier predictions,” the state’s report says. “Concerns focused on growing geopolitical tensions and continued inflation in energy and food prices. However, ongoing interest rate increases are anticipated to bring a normalization of the U.S. labor and housing markets.”