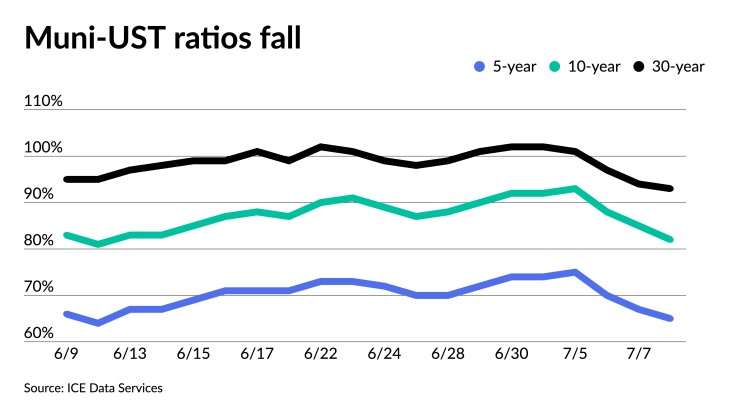 Municipals were mixed to close out a quiet summer Friday session ahead of a larger new-issue calendar that sees several billion-dollar deals.

Triple-A benchmark yields once again largely ignored a selloff in U.S. Treasuries after a robust jobs report indicated the Federal Reserve will likely hike interest rates another 75 basis points at its next meeting. Equities ended slightly up.

“The strength of the labor market gives the Fed a green light to raise rates 0.75% in July to combat higher inflation,” said Matthew Miskin, co-chief investment strategist at John Hancock Investment Management. The rise in the two-year UST as of late shows the bond market has given its blessing for another larger-than-normal rate hike, he noted.

“There are continued signs that inflation likely peaked on a year-over-year basis in the first quarter, but the problem is it is not coming down that quickly,” Miskin said.

This, he said, leaves the Fed in “an unfortunate position where they likely need to tighten further into a slowing economy.”

Investors will be greeted Monday with a massive increase in supply, with the new-issue calendar estimated at $11.47 billion in $7.84 billion of negotiated deals and $3.63 billion of competitive loans. It will be the largest volume week of the year so far.

“Over the past several months, enough has been said about the dismal performance of the municipal market in the first half of the year,” according to Barclays PLC.

The combination of “ongoing geopolitical concerns and a hawkish Fed brought quite a bit of market volatility, and USTs have whipsawed, taking tax-exempts along for the ride,” Barclays strategists Mikhail Foux, Clare Pickering and Mayur Patel said.

“It did not help that munis entered the year at very rich levels, supported by positive technicals as COVID concerns receded,” they noted.

But market action over the past two weeks has increased BofA strateigsts Yingchen Li and Ian Rogow’s confidence the muni high-grade market “should deliver a strong performance during the second half of 2022 after a record selloff in the first half of the year.” Triple-A benchmark yields saw a mild bear flattening in the first quarter, followed by a strong bear steepening in the second quarter.

They said “strong Fed action and an unwavering hawkish stance, together with resulting recession risks, should bring peak inflation speculation back on again.” But while that  speculation will keep long-end rates in check, reduced bets on the final Fed Funds rate in this tightening cycle will keep front-end yields in check too.

“This is the environment we have been waiting for, i.e., a more stabilized macro rates environment in which muni supply/demand factors will be rationalized,” BofA noted.

“Large redemption and coupon payments are at work, retail buyers have shown a more persistent interest in adding and mutual fund flows are essentially flat,” according to Li and Rogow.

Rate volatility is still very high, they said, “as there is much uncertainty about Fed policy and the Fed’s end-point, but clarity should eventually emerge on both issues.”

But Foux, Pickering and Mayur believe that while munis “may be more sensitive to rate volatility than other asset classes, they should outperform them during times of economic stress.”

Overall, they think that yields in the third quarter are unlikely to repeat their second-quarter sell-off and that 10-year USTs will trade around 3% by the end of 2022.

Barclays strategists said munis have “recovered from the extremely cheap levels reached in mid-May,” and “at current levels, there is still enough upside versus Treasuries compared with historical averages, especially for long-dated tax-exempts.”

Municipal credit quality remains solid, but they noted that generally the asset class is also “considered more defensive than most others during times of economic stress.”

While “Job gains in June slowed modestly month-over-month,” they were much better than expected with total nonfarm payrolls increasing by 372,000 compared to the projected 275,000, said David Kelly, chief global strategist at J.P. Morgan Asset Management.

With June’s payroll growth number and the unemployment rate holding at 3.6%, both are “consistent with the strong job market seen thus far in 2022,” said Joel Kan, associate vice president of economic and industry forecasting at Mortgage Bankers Association.

In the first half of the year, the economy saw 450,000 job gains per month, which is historically an “extremely robust pace,” he said.

“This labor market strength comes despite other economic data showing signs of weakening and a higher probability of a recession,” Kan said.

But at a time when talk of recession dominates, Kelly said that “the continued strength in the labor market provides an important tailwind for the economy against the risks of sustained hot inflation and deteriorating consumer sentiment.”

He said, “employment is generally a lagging economic indicator” so June’s report does not eliminate the possibility of a recession starting soon.

“However, with labor demand still near record highs, this does suggest that the next economic downturn could be a relatively mild one for workers,” Kelly noted.

“Thus far, the steady but gradual deceleration in the labor market bodes well for a soft landing,” Sonola said, noting “we still in the early innings of the Fed’s tightening cycle as attention shifts to the CPI inflation print next week.”

And “with the Federal Reserve intently focused on bringing down inflation, we expect this will not alter near-term expectations for another 75-basis-point rate hike at the next FOMC meeting,” Kan said.

The Cities of Dallas and Fort Worth, Texas, (A1/A+/A+/AA/) are set to price Tuesday $542.460 million of non-AMT Dallas Fort Worth International Airport joint revenue refunding bonds, Series 2022B. Jefferies.

Gabriel Rivera contributed to this story.