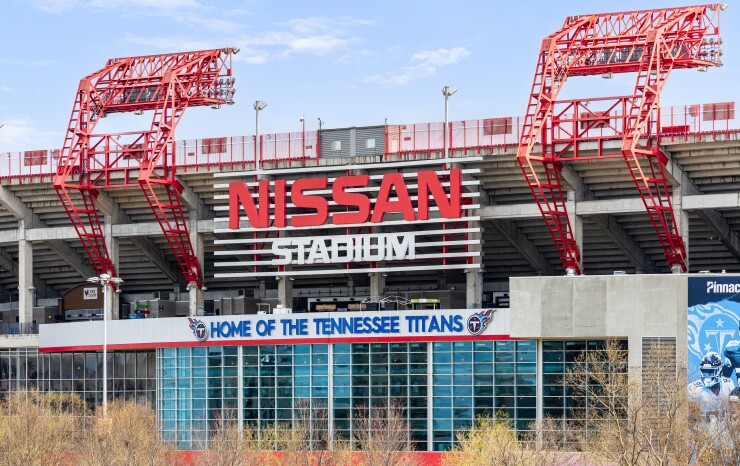 Nashville is negotiating with the National Football League’s Tennessee Titans about building a stadium that would be partly financed with municipal bonds but would lower costs to taxpayers who would be relieved of the burden of paying maintenance costs.

The state, city and owners would all contribute toward the construction of a domed stadium under a deal being worked out now, with a cost estimated between $1.9 billion and $2.2 billion.

Mayor John Cooper and the Adams family, the team’s owners, are negotiating particulars, so the size of the final transaction hasn’t been determined, officials said. The bond sale is not expected to take place this year.

The state Legislature and Gov. Bill Lee have already signed off on a stadium deal and bond issuance.

The state would issue up to $500 million of general obligation bonds while the city would sell revenue bonds issued through the Sports Authority of the Metropolitan Government of Nashville and Davidson County.

The Titans estimated its owners would contribute about $700 million while the Sports Authority would sell up to $700 million of muni bonds.

While the team’s figures are very preliminary because talks are ongoing and the city is doing its own due diligence, it’s expected the owners would contribute a bit more than half of the final amount after the state’s contribution while the city would contribute the other half.

The deal will be a win-win situation for all those involved, according to a spokesperson for the Metropolitan Government of Nashville and Davidson County.

A new stadium would help taxpayers by eliminating a covenant signed by the city in the 1990s when Nissan Stadium was first built that requires the city to pay the team for renovations and upkeep and maintenance, funds that come straight out of its general fund coffers, which could cost taxpayers hundreds of millions of dollars going forward.

A stadium deal would end that requirement, getting taxpayers off the hook for those costs, which have been steadily mounting and will continue to do so unless the stadium is replaced.

“Some say things are fine now. But the current situation is not fine,” the spokesperson said. “It’s an enormous burden on taxpayers. This deal would alleviate that burden.”

Under the current framework, the county authority would sell revenue bonds backed by a sales tax redirect, meaning all the sales taxes collected in the stadium and on the stadium campus for the duration of the bonds would go toward debt service and principal.

The hospitality industry has agreed to an increase in the hotel/motel tax if a new domed stadium is built, which would provide a second revenue stream to pay off the bonds.

“We could issue revenue bonds against those two revenue streams to pay for Metro’s portion of the stadium and still not have to use anything from the general taxpayer’s fund,” the spokesperson said. “And that would free up a lot of money to deal with other priorities, like education, homelessness and affordable housing.”

The state bond issuance and the revenue stream from the hotel/motel tax will only happen if a new enclosed stadium is built, officials said. The funds can’t be used for renovations or upkeep on the current venue.

“The city has been buzzing since the news of the state passing legislation to increase the local hotel occupancy taxes by 1% for a covered stadium,” the Sports Authority Treasurer Michell Bosch told The Bond Buyer.

“Our state’s legislation requires tourism tax revenues to be used for tourism-related activities. And so assuming our local government implements the new tax, that would add more revenues to help cover debt service,” Bosch said. “The bonds will be structured within the confines of the new lease agreement, which we expect will have more favorable terms than the current lease, but the lease has not been negotiated as of yet.”

The Sports Authority has a standalone credit rating of Aa3 from Moody’s Investors Service and AA from S&P Global Ratings.

“We expect that, with very conservative growth assumptions, the proposed revenue sources have a strong propensity to support the proposed debt,” Bosch said.

The city was being smart in working with the team and the hospitality industry and bringing in the state on the deal, John Hallacy, founder of John Hallacy Consulting LLC, told The Bond Buyer.

“Stadiums require significant buy-in from all of the parties these days,” Hallacy said. “It is a choice to keep the benefits from the cachet of having a team in town.”

He noted municipal financing was the best way to go in this case.

“Sales tax support is fairly common. Taxes based on development of property are always subject to the quality of the estimates,” he said. “What happens if there is another pandemic in the future? There are many considerations in making these projects a success. Tax-exempt financing remains the lowest cost financing in the total financing package.”

A new stadium makes financial sense and would also be much cheaper, according to the Titans.

Burke Nihill, president and CEO of the team, told the Tennessean newspaper that building a stadium would be a better value for the money than renovating the old one — and would cost about the same.

He cited an analysis by AECOM Hunt that determined the current stadium would need about $900 million in upgrades to remain usable through 2039 and an additional $1.2 billion would be needed for current renovations — a cost almost equal to that of building a stadium.

These deals came after the 2020 sale of $225 million of taxable public improvement revenue bonds, which were priced for the authority by Citigroup for a Major League Soccer stadium.

The stadium, GEODIS Park, opened its doors in May in Nashville’s Wedgewood-Houston neighborhood. The 30,000-seat arena is the largest soccer-specific stadium in the U.S and Canada and features a 360-degree canopy, 65-foot-wide concourse and a safe standing section.

Across the nation, municipal bond financing for sports stadiums is making somewhat of a comeback.

In Arizona last month, talks for a new home for the National Hockey League’s Arizona Coyotes, which could involve as much as $200 million of municipal bonds, got underway in Tempe after the team was exiled from nearby Glendale.

The City Council agreed to start negotiations after hearing from the public and from team representatives, who outlined plans for a $2.1 billion mostly privately financed project that would include a 16,000-seat arena, a practice facility, theater, hotels, office buildings, housing, and over 300,000 square feet of retail and restaurant space. The proposal calls for some $200 million of municipal bonds.

And New York State’s fiscal 2023 budget approved in April, includes a $600 million commitment from the state to subsidize a stadium for the National Football League’s Buffalo Bills.

Several sports franchises have financed projects in recent years through tax-exempt bonds. The Atlanta Falcons’ $1.4 billion Mercedes-Benz Stadium was financed in part through $200 million of tax-exempt bonds, half of the $1.2 billion used to finance the Dallas Cowboys’ AT&T Stadium was done through tax-free bonds as well as half of the Minnesota Vikings $1 billion Vikings Stadium.

Of the 57 stadiums built since 2000, 43 were at least in part financed by tax-exempts, according to a March 2020 report by the National Tax Journal.

But not everyone is a fan of taxpayer-funded stadiums.

Earlier this year there was a plan afoot in Congress to prohibit tax-exempt financing for professional sports stadiums.

The “No Tax Subsidies for Stadiums Act of 2022” was introduced by Rep. Jackie Speier, D-Calif., Rep. Earl Blumenauer, D-Ore., and Rep. Don Breyer, D-Va. However, this effort came to naught.

The idea of prohibiting the use of tax-exempt private activity bonds for the financing of sports stadiums is not a new one. In 2014, Sen. Tom Coburn, R-Okla. called for a ban on federal tax-exempt financing for sports stadiums. President Obama in his fiscal 2016 and 2017 budgets also proposed prohibiting tax-exempt bonds from being used for private sports facilities. These efforts also failed.

The issue was revived again during negotiations over the Tax Cuts and Jobs Act of 2017 but was cut out of the final bill.