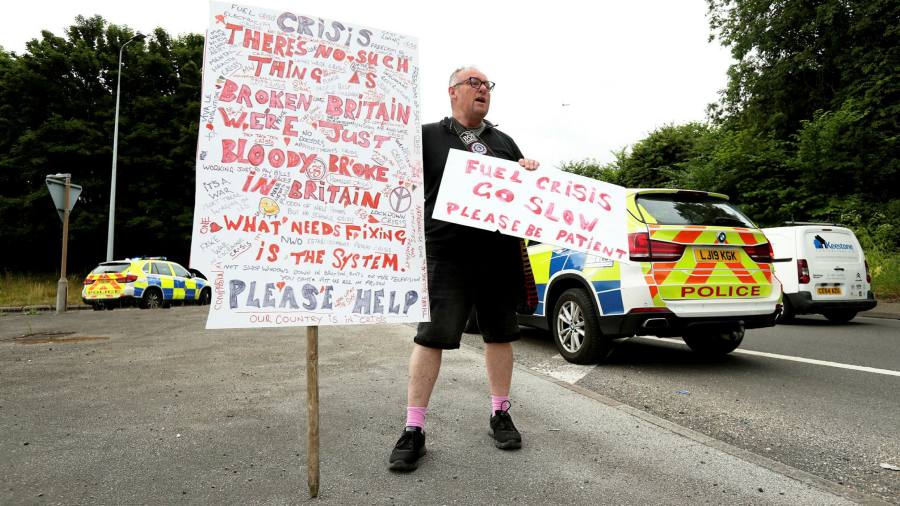 Protesters brought parts of the UK’s motorway network to a standstill on Monday in a demonstration over high fuel prices.

Police warned drivers that a “slow-moving rolling roadblock” was causing delays on parts of the M4 motorway near the border between England and Wales and on the M5 near Bristol.

There were also “significant delays” in both directions on the Prince of Wales Bridge that links England to southern Wales, police said.

With protesters driving between 25mph and 30mph motorists were warned to expect delays and to reconsider their journeys.

Elsewhere, similar demonstrations and delays were reported on the M180 in Lincolnshire, while West Yorkshire Police said it was “negotiating with a small group of fuel price protesters” at a motorway service station, but reported no disruption during the morning rush hour.

The protests represent the most visible backlash yet against the soaring cost of fuel, which is deepening the cost of living crisis for many motorists.

The protesters did not appear to be operating under the umbrella of a single campaign group but were discussing and organising the protests on social media.

A Facebook group called “Fuel Price Stand Against Tax”, which was created in March, had almost 50,000 members on Monday morning, while an online petition to reduce the tax on fuel by at least 30 per cent had received 140,000 signatures.

Chancellor Rishi Sunak in March cut duty on fuel by 5p a litre, but that has had little impact as the price of oil has risen.

The UK competition watchdog has also launched an investigation into competition in the retail fuel market, following government concerns over whether the cut in fuel duty was being passed on to drivers.

Fuel prices have been hitting new records on a daily basis, and the average cost of filling a family car with petrol hit £100 for the first time last month, up from £71 the previous year, the RAC has said.

The average cost of a litre of diesel was just under £2 on Monday morning, while a litre of unleaded petrol was £1.91, according to the motoring group.

Wholesale prices, which take into account the costs of the raw materials and taxes but not retailer costs such as delivery, have risen roughly 50 per cent this year.

Monday’s protests were the latest disruption to hit roads in the UK over the past year, after climate change protesters repeatedly stopped traffic on busy motorways, leading the government to bring in new legislation against what it called “guerrilla protests”.