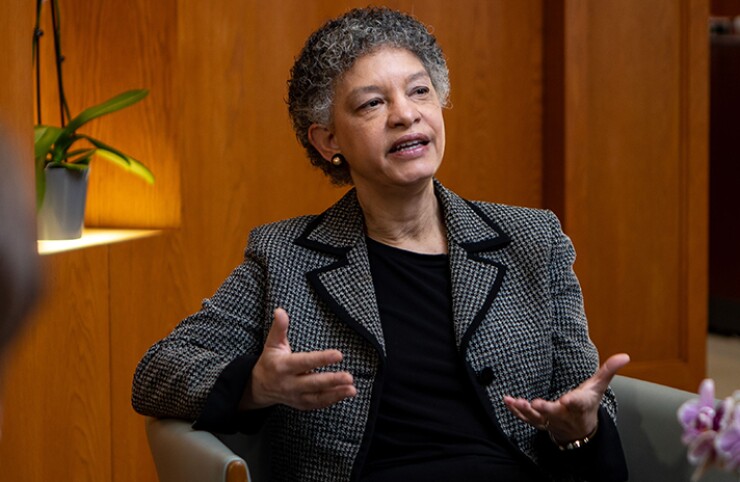 Susan Collins officially took office Friday as the president of the Federal Reserve Bank of Boston, making history in becoming the first Black woman to lead a regional Fed bank.

Collins comes from the University of Michigan, where she worked for 15 years, serving most recently as provost and previously as dean of the Gerald R. Ford School of Public Policy.

As a voter in monetary policy decisions this year, Collins will have an immediate say on what the Fed’s next move should be on interest rates. Officials have been aggressively raising them to cool the hottest inflation in 40 years, while hoping to avoid tipping the economy into recession.

“I’m honored to take on this new role and the tremendous responsibility it carries, especially at such an important time for the U.S. economy,” Collins said in a statement.

The central bank raised interest rates by 75 basis points last month — the biggest rate increase in nearly 30 years — and officials say they will debate making another large move at the July 26-27 meeting. The Fed is also shrinking its $8.9 trillion balance sheet, which ballooned in size during the pandemic as it bought assets to calm investor panic.

Policy makers, who’ve been sharply criticized for leaving monetary policy too easy as inflation pressures took off last year, are rapidly trying to catch up. They’ve said they want to get rates to a level considered “neutral,” which neither stimulates nor slows the economy, and then push higher into restrictive territory.

Collins is well-known among Fed watchers and policy makers. She served as a director for the Chicago Fed for nine years and was a regular at the Kansas City Fed’s annual conference in Jackson Hole, Wyoming.

Her presence will add to the racial and gender diversity of the Fed, which has been led mostly by White men since it was created in 1913. Lisa Cook became the first Black woman governor on the Board when she joined this year, and Philip Jefferson became only the fourth Black man to serve as a Fed governor.