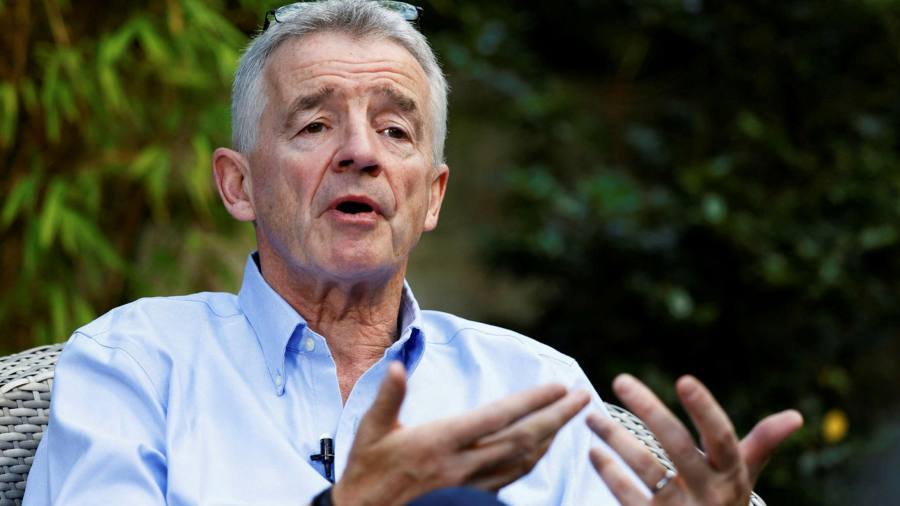 Ryanair boss Michael O’Leary, the pioneer of low-cost travel in Europe, has warned fares will rise for the next five years because flying has become “too cheap” to make profits as industry costs spiral.

His warning comes as ticket prices have risen in Europe and the US this summer as passengers return and some airlines cut capacity because of staff shortages.

“It’s got too cheap for what it is. I find it absurd every time that I fly to Stansted, the train journey into central London is more expensive than the air fare,” he said in an interview with the Financial Times.

He said he expected a combination of high oil prices and environmental charges to push the average Ryanair fare up from €40 to between €50 to €60 over the medium term.

O’Leary also fired a broadside at the British government and what he called “the disaster” of Brexit that had stopped airlines easily recruiting European workers, which the industry says has worsened staff shortages this summer.

“This is without doubt one of the inevitable consequences of the disaster that has been Brexit,” he said.

“Withdrawing from the single market, just so that they can say ‘We got Brexit done’ was the height of idiocy. But then they are idiots.”

O’Leary turned Ryanair from a small regional carrier in the 1990s into the biggest airline in Europe by ruthlessly cutting costs, and passing these gains on to consumers through cheap ticket prices.

“It has been my doing [making air travel cheap]. I made a lot of money doing it. But ultimately, I don’t believe air travel is sustainable over the medium term at an average fare of €40. It’s too cheap at that. But I think, you know, it will still be very cheap and affordable at €50 and €60.”

Median fares from London to summer destinations in Portugal, Spain and Greece have all jumped compared with a year ago, although they are significantly lower than 10 years ago, according to data from Kayak.com. Prices from London to Athens, for example, have halved in the past decade.

Ryanair rivals easyJet and Wizz Air have also both reported higher fares in recent investor updates. But O’Leary is one of the first airline bosses to warn about an increase in fares in the longer term.

The Irish airline had hedged the majority of its future fuel requirements for the rest of this year at $65 per barrel before Russia invaded Ukraine, saving it from the worst impact of the sharp rise in prices.

But the Ryanair boss still thinks fares will rise as he expects oil prices will remain “structurally higher” for the next four or five years, “until we can wean ourselves off Russian oil and gas”.

He added he expects wider inflationary pressures to hit the airline industry next year, including staff costs and air traffic control charges.

O’Leary also highlighted rising environmental charges, under which airlines buy tradeable credits to cover the amount they pollute under parallel emissions systems in both the UK and the EU.

He said the EU emissions trading system, which covers only intra-European flights, should be extended to long-haul journeys, a measure recently rejected by EU environment ministers.

“It is manifestly unfair and inequitable and is distortive . . . there has to be a fair system.”

Stephen Furlong, an analyst at Davy, said the price of oil would be the “one big factor” in future fares.

“Ultimately airlines try and pass it on. Whether they are successful or not will determine the margin, profitability and performance of the industry,” he added.

Ryanair has been virtually the only major carrier in Europe to dodge disruptions from staff shortages.

Unlike many rivals, it did not sack swaths of its employees when Covid-19 struck, instead cutting their pay while keeping them employed.

O’Leary said the decision to keep pilots and crew flying regularly, so they could keep their licences and be “ready to rock and roll” once passengers came back, had been “critical”.

But he refused to criticise other airlines for their decisions during the pandemic, even as British Airways, easyJet and Lufthansa have cut flights following disruption.

“I have a lot of sympathy and I would not be critical of competitor airlines. Covid has been unbelievably difficult to manage your way through.”

EasyJet last month disclosed it had rejected 8,000 job applicants because of their nationality this year, most of whom were from the EU.

The UK Department for Transport said there had been disruption around the world because of staff shortages.

“It is not obvious that reaching for the lever marked ‘more immigration’ will solve the problem,” it said.