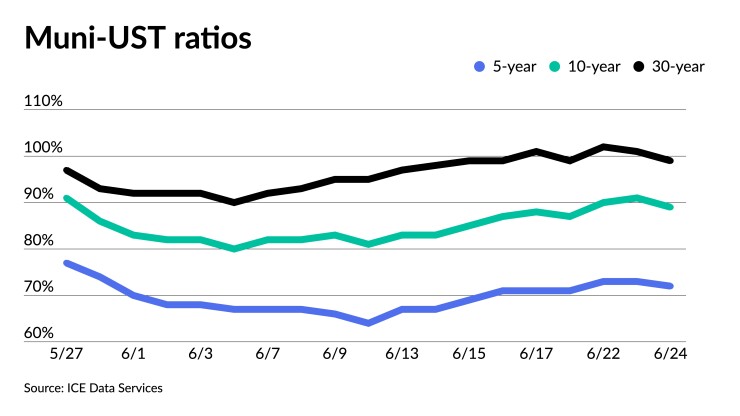 Municipals were little changed in a quiet summer Friday session ahead of a larger new-issue calendar and the final week of a volatile month, while U.S. Treasuries were weaker and equities rallied.

Triple-A yield curves were mostly flat to a basis point or two stronger in spots while UST were weaker with larger losses on the long end. Thirty-year muni to UST ratios fell.

Investors will be greeted Monday with an increase in supply with the new-issue calendar estimated at $8.010 billion in $5.924 billion of negotiated deals and $2.7087 billion of competitive loans to close out the second quarter.

The new-issue calendar for the week is led by $950 million of future tax-secured tax-exempt subordinate revenue bonds from the New York City Transitional Finance Authority (Aa1/AAA/AAA/).

The Alabama Corrections Institution Finance Authority will price $725 million of tax-exempt revenue bonds on Tuesday, more than a year after underwriters pulled out of a divisive deal that would have financed the construction of two privately owned prisons.

Other notable deals in the primary include $369 million of bonds from the Municipal Electric Authority of Georgia and $318 million of GOs from the Beaverton School District No. 48J, Oregon.

In the competitive market, the North Dakota Public Finance Authority will sell $321 million of appropriation bonds; Seattle, Washington, will sell $264 million of revenue bonds; and the Clark County School District, Nevada, will sell $200 million of GOs.

“Signs of the muni bond market returning to normalcy appears strong, as the bold Fed action earned market confidence,” Yingchen and Rogow said in the weekly report. “The 10- and 30-year Treasury yields rallied strongly after reaching nearly 3.50%. long-term muni rates, which only came off a few basis points from a double top formation, should decline a lot more from here.”

Muni-UST ratios, they noted, rose slightly “from the more reasonable levels of early June, though the 10-year and shorter maturity ratios rise are more tempered.” Only the 30-year ratio topped 100%, which may prove attractive to some crossover accounts.

“When Treasuries rallied this week, tax-exempt yields also moved down in sympathy, but lagged, and MMD-UST ratios have continued to move higher,” according to Barclays PLC.

Barclays strategists Mikhail Foux, Clare Pickering and Mayur Patel said “long-dated tax-exempts are not far from the levels reached in mid-May, which attracted crossover interest at that time.”

“The 10s20s and 10s30s curves are close to the steepest point in many years,” they said, adding that the long end looks attractive as a result.

“Near term, supply could put pressure on longer-dated munis, but to us, current levels are quite attractive already, and we expect muni yield curves to flatten by the end of the year, if not earlier,” Barclays strategists said.

BofA strategists say that a stable or bullish Treasury rates market “would be a prerequisite for the return of a more constructive muni rates market performance.”

“Given the Fed’s stance, that prerequisite has been met in our view,” they said. “As such, strong performance of the muni rates market during the summer should be expected.”

A hawkish Fed, they said, is anticipated to “put more pressure on the economy and thus on credit spreads.” Credit spreads for single-A-rated, triple-B-rated and high-yield indexes widened 10 basis points or so for the month-to-date in June.

These moves “suggest that further widening should be expected as the economy slows,” they said.

“This year’s mutual fund outflows have been consistent since the second week of January after the Fed abruptly signaled its intention to hike interest rates,” they said.

Mutual funds outflows almost turned neutral in the first week of June, but suddenly resumed. “However, the resumption of large outflows proved to be just as short-lived as the muni rates resurge,” they said. “As the rally progresses, we likely will not need 10-year triple-A rates to be lower than recent lows in early June to see mutual funds turn positive.”

While tax-exempts, especially long-dated bonds, are becoming attractive again, the same isn’t true for taxables, according to Barclays strategists. Unlike corporate spreads widening this month, Foux, Pickering and Patel said taxable munis have barely moved, noting “the corporate/taxable muni yield differential is at one of its widest points in the past 12 months.”

If corporate spreads widen further in response to concerns about economic growth, they said, “it will be hard for taxable munis to hold their ground.”

Taxables have lost the most out of all muni structures with the Bloomberg taxable index seeing losses of 14.50% year to date while exempts have lost 9.31% since January.

The Dormitory of the State of New York (/BBB-//) is set to price Wednesday $148.815 million of Yeshiva University revenue bonds, Series 2022A. Goldman Sachs & Co.

Pueblo County, Colorado, is set to sell $126.355 million of Jail Project certificates of participation, Series 2022A, at 12 p.m. eastern Thursday.

Gabriel Rivera contributed to this report.