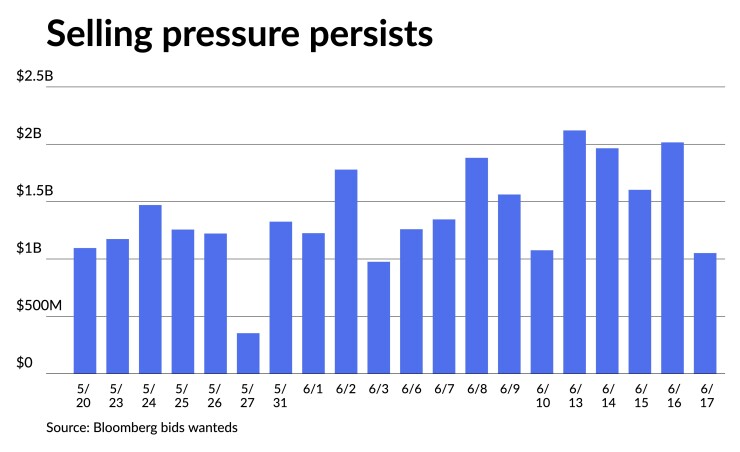 Municipals were little changed Tuesday as U.S. Treasuries sold off on the long end and equities rallied.

Triple-A benchmarks have remained steady over the past several trading sessions following the massive volatility at the start of last week. The majority of the losses happened last Monday and Tuesday traders and investors were trying to get ahead of the Fed’s announcement of their rate hike, noted Jason Wong, vice president of municipals at AmeriVet Securities.

Selling pressure via bids wanteds was heavy all last week and issuers pulled deals amid the market turmoil.

Municipal bond mutual fund outflows hit the third highest on record, per Refinitiv Lipper data, with the two preceding higher figures during the height of the COVID-led chaos in 2020.

The volatility resulted in munis having one of the worst weeks since April 2020. The selloff “wiped out virtually all of the gains we had made back in May and early June and pushed yields towards an eight-year high,” Wong noted.

The Muni Index saw losses of -2.05% last week, its worst weekly performance since the week ended April 3, 2020, when losses totaled negative 2.49%, said CreditSights strategists Pat Luby, John Ceffalio and Sam Berzok said in a report. Year-to-date losses are at 10.06%, taxable munis have lost 15.42%, high-yield munis are off by 13.26%, and the Impact index at negative 13.11%, per Bloomberg data.

Wong noted bids wanteds continue to be at elevated levels as “mutual funds are fearing the pressure to sell securities as redemptions continue to hit the markets.” Bids wanted totaled $8.76 billion last week after spiking to $2.12 billion on Monday and $2.02 billion on Thursday, per Bloomberg data.

The uptick in institutional bid wanted volume has caused prices to be pressured, CreditSights strategists said.

Despite the market weakness, they said, “muni customer ‘buy’ trades have continued to exceed ‘sell’ trades, although the pace has slowed.” The five-day average as of Friday, June 10 was $2.3 billion, dropping to $1 billion as of last Friday, they said.

Inflation fears have stressed fixed-income markets in general, with the 10-year Treasury yield eclipsing 3.32% midweek, the previous high set in 2011.

“We expect this ratio to continue, as both markets should remain range bound for the foreseeable future,” Nuveen said.

Spread changes for the muni credit indices were mixed, CreditSights strategists said, with the double- and single-A indices tighter as the triple-B and high-yield indices both widened.

“Due to the pressure on the secondary market for the continuing outflows from municipal bond mutual funds,” they believe that lower-quality spreads, like triple-B and high-yield, “are at greater risk of spread widening.

While the new-issue calendar has some large deals, including $1.6 billion of tax and revenue anticipation notes from Los Angeles, California, and $1.2 billion of GOs from gilt-edged Georgia, they said it’s still on the lighter side.

“We are continuing to see many issuers hold off on their bond sales as the muni markets have been getting battered as the Fed continues to try combat high inflation,” Wong said.

The lighter calendar, though, “may help ease the imbalance between demand and supply,” according to CreditSights strategists.