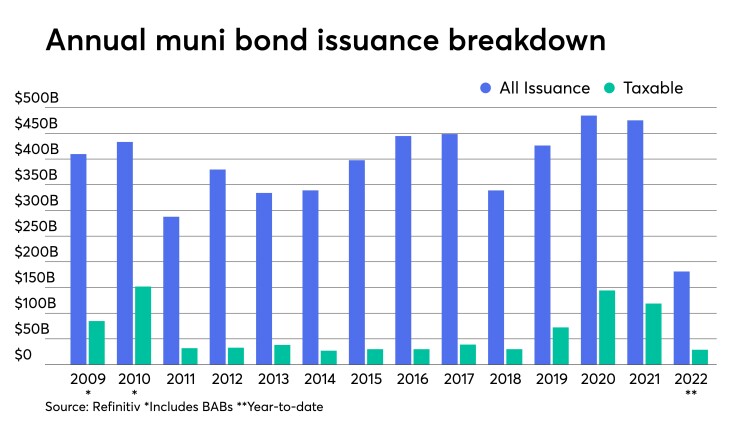 Market participants are revising their supply projections downward as rising interest rates have stymied refunding and taxable volumes and overall market volatility has held some issuers to the sidelines.

BofA Securities was the latest shop to revise expectations downward because of the dearth of refundings, with strategists Yingchen Li and Ian Rogow forecasting total volume in 2022 to be $50 billion less than the $550 billion assumption they made at the end of 2021.

“Due to the Fed’s tightening and higher rates, even if general market rates go down significantly and yield curves go much flatter in 2H22, there is likely not enough time for refunding volumes to meet our $180 billion expectation for the year,” equating to a $70 billion drop, they said in a report Friday. They expect new-money to increase slightly, putting their projections at $500 billion total.

Most firms at the end of last year estimated total issuance for the year would fall between $390 billion and $550 billion, basing their forecasts on various factors, such as the new infrastructure law, interest rate expectations and monetary policy, global economic recovery and future tax policy.

Few predicted Russia would invade Ukraine, adding another major macroeconomic concern to the mix, which aside from humanitarian costs, has amplified supply-chain problems, rising fossil fuel costs and inflation around the globe.

Because of the confluence of these factors, many participants have lowered their municipal projections, saying even if supply picks up in the second half of 2022, it is highly unlikely that issuance will surpass last year’s totals given the slow start to the year.

Tom Kozlik, head of strategy and credit at HilltopSecurities, projects issuance at $415 billion to $425 billion at the most. Even that, he said, could be a stretch.

At the end of 2021, he expected total volume for 2022 to be $495 billion, in part, due to federal government aid and infrastructure dollars, and later revised total issuance to be between $400 billion and $450 million at the end of April.

But lower economic growth forecasts and rapidly rising interest rates, creating a “sticker shock” where new-money is concerned and leading to a drop in refundings, have driven Kozlik to revise his estimates even lower.

In the most recent figures for May, refunding volume decreased 70.6% while taxable issuance dropped nearly 31%. Overall, May issuance was down 9% year-over-year and below the 10-year average for the month.

Similarly, Pat Luby, senior municipal strategist at CreditSights, revised his predictions down from $480 billion to $410 billion in a report published Wednesday. In late May, he expected total issuance to be on par with 2019’s $426.347 billion figure.

He said in an interview the pace of issuance year-to-date, the breakdown of new-money financing and the steep drop in refundings led him to lower his estimate by $70 billion.

“We’ve obviously got a lot of uncertainty in the market, so things could change a lot,” he said of revising his projection even further. “So plus or minus a little bit would not be a surprise.”

BofA is still on the high end of projections. It now assumes refunding volume will decrease $70 billion to $110 billion from $180 billion at the start of the year, while new-money volume estimates will rise from $370 billion to $390 billion.

Matt Fabian, a partner at Municipal Market Analytics, said in May he had slightly revised his yearly total as yields have risen but noted it’s hard “to talk affirmatively about the end of the year.” His $450 billion estimate for 2022 has been revised to $400 billion.

“I’m still generally bullish on supply, just not quite as bullish as I was at the beginning of the year before all the pain started,” Fabian said.