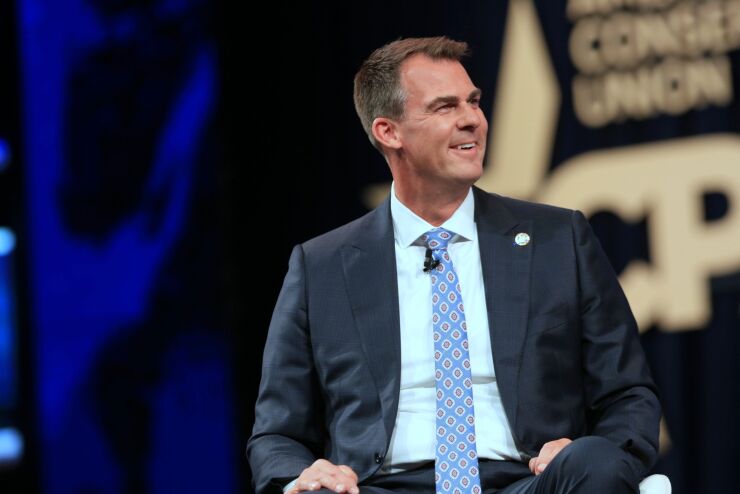 The Oklahoma Turnpike Authority could be in the municipal market as early as December to begin funding a $5 billion, 15-year extension project that is the target of litigation after its board took action on Thursday to head to the state Supreme Court to validate the debt.

Of the up to $1 billion of debt the OTA board unanimously approved, $950 million will initiate funding for the ACCESS (Advancing and Connecting Communities and Economies Safely Statewide) Oklahoma project, Wendy Smith, the OTA’s finance and revenue director, said on Friday.

The OTA plans to launch a request for proposals process next week for bond counsel, disclosure counsel, financial advisor, and to establish a pool of underwriters.

Once a team is in place, the OTA board directed the agency to seek approval of the debt from the Oklahoma Council of Bond Oversight and then ask the high court to validate debt for turnpike extensions challenged in one of two lawsuits filed in district court last month.

The OTA is aiming for the council’s July meeting and if approved, heading to the high court by the end of July, Smith said.

“We will probably do a small bond issue to start with because we’re very cognizant of what’s going on the economy right now. We will probably do something more manageable from a leveraging standpoint and where we won’t need a toll increase right away,” she said, adding the initial second senior revenue bond sale in December or January could be in the $200 million to $400 million range.

Oklahoma Secretary of Transportation Tim Gatz, who also serves as OTA executive director, told the board on Thursday that while the OTA was confident it has the legislative authority to build the projects, it is important that its “ability to undertake any new project withstands public and legal scrutiny.”

“These items are designed to put in place the steps necessary for the turnpike authority to make application with the Oklahoma Supreme Court for a judicial determination of bonds and bring certainty and finality to the issue of whether the turnpike authority has the legislative authorization to undertake these projects,” he said.

The board terminated an untapped $200 million revolving line of credit with Wells Fargo to jumpstart funding for the project.

The bond oversight council approved the credit line in May with a stipulation that the OTA could not use the funds for expenditures related to the Southern Extension Turnpike, Outer-Loop: East-West Connector, and Outer-Loop Tri-City Connector, which are being challenged in one of the lawsuits.

That lawsuit, which was filed in May in Cleveland County District Court by property owners and others, claims the OTA lacks legislative approval to build or finance through bond issues three turnpike extensions included in the ACCESS program.

It also seeks an injunction prohibiting the OTA from moving forward, raising concerns that federally protected land will be harmed and thousands of homes and properties will likely be destroyed or damaged.

Robert Norman, the plaintiffs’ attorney in that lawsuit, said while the OTA tries to push everything into the Supreme Court, the lawsuit in district court will continue.

“They’re just trying to rush into this for whatever reason, probably for the legal maneuver of maybe stopping full and fair discovery, fact finding, and informational disclosure in the judicial system,” he said.

A second lawsuit also filed last month in the same court claims the OTA “willingly violated” the Open Meeting Act to accelerate construction and advance financing for the Kickapoo Turnpike extension, leaving the public in the dark.

Gov. Kevin Stitt officially unveiled ACCESS Oklahoma in February, calling it “a bold investment in our future that provides needed corridor connections and expansions while making travel easier and leading to more economic development across the state.”

The remaining $50 million of debt authorized by the OTA board will refund 2020 notes and the OTA also has the ability to refund some 2017 bonds depending on market conditions, according to Smith.