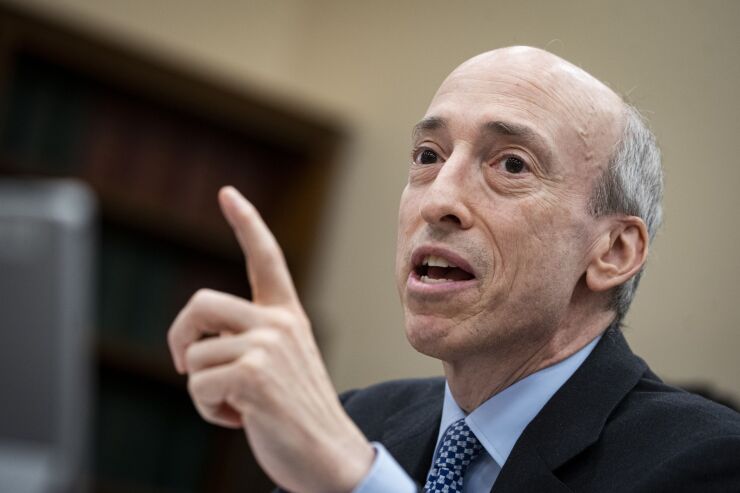 The Securities and Exchange Commission’s proposed amendments to its Names Rule may not have a direct effect on the municipal bond industry today, though market participants believe it could influence proposals the SEC’s Office of Municipal Securities is considering for the future.

The proposal comes days after BNY Mellon was fined $1.5 million by the SEC for misleading claims that some of the mutual funds it managed went through a quality review of environmental, social and governance despite the fund name claiming it had.

“People in the municipal bond community will pay attention to it as a portent of the future, such as a generality,” said Chuck Samuels, member at Mintz Levin and counsel to the National Association of Health and Educational Facilities Finance Authorities. “It’s not legally relevant. But it’s absolutely relevant as a precedent as sort of a description of an approach.”

The Names Rule, which was developed out of provisions passed in 1996 that allowed the Commission to define registered investment company names as materially deceptive or misleading and not codified until 2001, is being expanded in ways related to its 80% requirement.

“The expanded requirement would apply to funds whose names suggest that they invest in issuers or investments with particular characteristics,” SEC chairman Gary Gensler said. “This would include, for example, Environmental, Social and Governance-related (ESG) fund names.”

The proposal would require firms who drift below this 80% threshold to step back into compliance within 30 days, and would require a fund to disclose how it defines the terms in its name and selects investments in line with its name. A fund would also be required to indicate those percentages on its monthly Form N-PORT, and update its recordkeeping process to be in compliance with the new Names Rule.

It also specifies that if ESG factors are being considered alongside others, such as in integration funds, then ESG-related terms are barred from being used in their names.

But while it’s been known to the muni industry that any proposal that the Commission puts forward on ESG will almost surely have an indirect effect on municipal securities, some of the questions raised by Commissioners are similar to the discussions happening among muni industry leaders.

SEC Commissioner Allison Herren Lee celebrated the proposal as a first step to get the ball rolling, despite the fact that not all aspects of ESG are clearly defined. But Commissioner Hester Peirce, the sole dissenting vote in the proposal’s 3-1 decision, saw the matter differently.

“E, S, and G cannot be adequately defined, nor will they be, should the proposal eventually find its way into the Code of Federal Regulations,” Peirce said. “Regardless of what one generally thinks of the SEC mandating hyper-specific ESG disclosures, the proposals we are voting on today will fail of their purpose because they are not so much built on sand as they float on a cloud of smoke, false promises, and internal contradictions.”

Defining what E, S and G mean for the municipal bond space has long been the work of the Government Finance Officers Association, whose best practices on ESG have received high marks. But the matter becomes more complicated following the SEC’s proposal, as competing interests hope to define ESG on their terms.

Muni market advocates have long considered munis “the original ESG market” and taking this proposal into account, fund managers can find ESG investments in the muni market, which could mean more traffic in the future.

Earlier this year, the Office of Municipal Securities signaled that its taking a closer look at issuer disclosure under Rule 15c2-12, which functionally requires bond issuers to disclose the incurrence of a financial obligation of the issuer or obligated person, if material.  That could grow to include elements of ESG, some experts believe.

But assessing the impact on how ESG regulations will affect the municipal bond industry may take the industry a long time to sort out.

“We are playing the long game right now,” Brock said. “It really is a definitional thing, and coming to a sort of solid definition that we can put in ink in Webster’s Dictionary is gonna take a long time.”