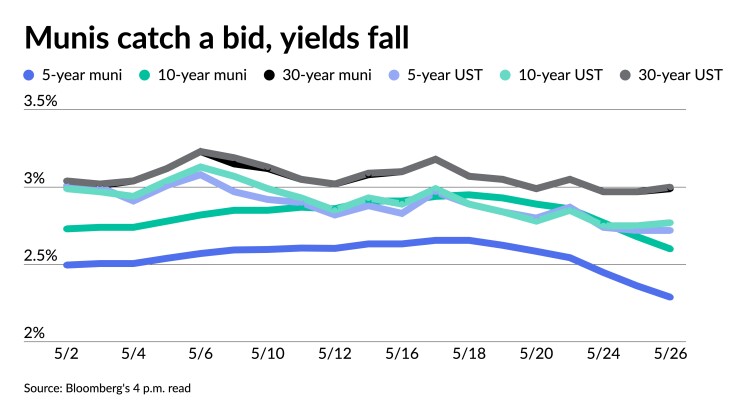 Municipals continued their rally Thursday with yields falling by another 12 to 15 basis points while U.S. Treasuries were little changed and equities rallied.

Investors will be greeted Tuesday with a decrease in supply with the new-issue calendar estimated at $2.691 billion in $1.786 billion of negotiated deals and $904.9 million of competitive loans.

The primary calendar is led by $505 million of green University of Utah general revenue bonds from the Utah Board of Higher Education. Other notable deals include $500 million from the state of Colorado and $465 million from the California Community Housing Agency.

The Iowa Board of Regents is expected to sell $150 million to lead the competitive calendar, along with the Beauford County School District, South Carolina, with $140 million.

“Though inflationary pressures and the current interest rate environment suggest that participants should continue to maintain caution, we believe that some of the dynamics are now signaling ‘green lights’ for individual bond entry points,” Morgan Stanley investment strategists Matthew Gastall and Daryl Helsing said in a report.

“Particularly for those buy-and-hold muni investors who have yet to do so this spring, we believe participants should exercise the current ‘right of way’ to add some pre-summer exposure to short final-maturity and kicker municipals,” they said.

“Healthy supply and laggard fund outflows have caused munis to underperform USTs as inflation and interest rate concerns have surfaced,” they said.

Seasonal transitions tend to be highly consistent throughout the municipal bond market, with investor interest and primary activity usually accelerating in the spring and fall, “which frequently converge with lower reinvestment demand due to the absence of mid-year/year-end coupon and maturity payments,” they said. The opposite typically occurs throughout the summer months and the holidays, they noted.

“Higher supply and weaker reinvestment demand can help create opportunities for investors,” according to Gastall and Helsing.

“The mere expectations of these ‘bearish’ developments can encourage municipal bond prices to temporarily underperform in the short term,” while “investors often have a heightened array of options to choose from when new-issue supply accelerates,” they said.

Overall, they noted, this can lead to more investment options at temporarily lower prices.

“These rates may continue to rise and cause volatility, but such price movements are often limited in deviation since most of the bonds’ maturities are set to be redeemed at par in the near future,” they said. “Hence, interim price action is often less of a concern for buy-and-hold investors.”

The “highest federal-bracket taxable equivalent yields in states that offer exemptions for the average income tax rate are now yielding 4.5% and higher” on two-, three-, and four-year single-A-rated munis, they said.

They added nearly 70%, 74% and 75% of the full triple-A municipal yield curve is now captured at the two-, three- and four-year final maturity, respectively.

“Though longer final maturities may help investors looking to ‘lock in’ rates or earn more yield, we believe current short-end levels warrant significant consideration, particularly when noting that the market still confronts the possibility of rising interest rates,” they said.

“The minutes are perhaps in the early stage of laying the groundwork for an eventual policy pivot,” said Mickey Levy, Berenberg Capital Markets’ chief economist for the U.S. Americas and Asia, and a member of the Shadow Open Market Committee.

“With the Fed acknowledging that risks to real activity are tilted to the downside, the minutes indicate many participants want to raise rates aggressively now to buy policy optionality down the line that ‘would leave the Committee well positioned later this year to assess the effects of policy firming and the extent to which economic developments warranted policy adjustments,’” he said.

While the Fed is intent on bringing down inflation, he said, “if this adversely affects the economy and is associated with a deterioration in labor market conditions, the Fed will move back from its aggressive anti-inflationary rate hikes.”

If unemployment rises above 5%, Levy said, “we would expect FOMC members in public comments to begin emphasizing a balanced approach to the Fed’s dual mandate, with such statements likely preceding either a pause on rate increases or potential easing.”

The Fed has carved a narrow path, he said, and now they are trying “to maintain credibility on fighting inflation while giving themselves flexibility later in the year.”

The FOMC appeared to be generally in agreement, as per the minutes, Brady said, but “tamping down the inflation juggernaut to the Fed’s medium-term target of 2% is a steep hill to climb.”

Investors still wonder “whether global inflation will continue, and if so, whether the Fed will have the stomach to increase rates in the face of lower asset prices and a slowing economy.”

With the Fed admitting they are behind the curve on inflation, Brady said, “consensus continues to mount that they are riding into the recession danger zone.”

Expect the next dot plot to show higher predictions for inflation, he said.

The minutes allowed for optimism, said Matt Dines, Chief Investment Officer and co-founder of Build Asset Management, “projecting confidence and empathy that the Committee’s shift to a neutral monetary policy framework will be successful at meeting its objective to bring down the elevated growth in price levels back toward its 2% longer-term target.”

This comes despite the Fed seeing downside risk to growth and upside inflation risk, he said, “suggesting the potential path for future policy from the Committee lies toward further tightening, not easing, if deemed necessary to meet its objectives.”

Competitive:
The Iowa Board of Regents is set to sell $150.320 million of University of Iowa Hospitals and Clinics hospital revenue refunding bonds, Series S.U.I. 2022C, at 11 a.m. eastern Tuesday.