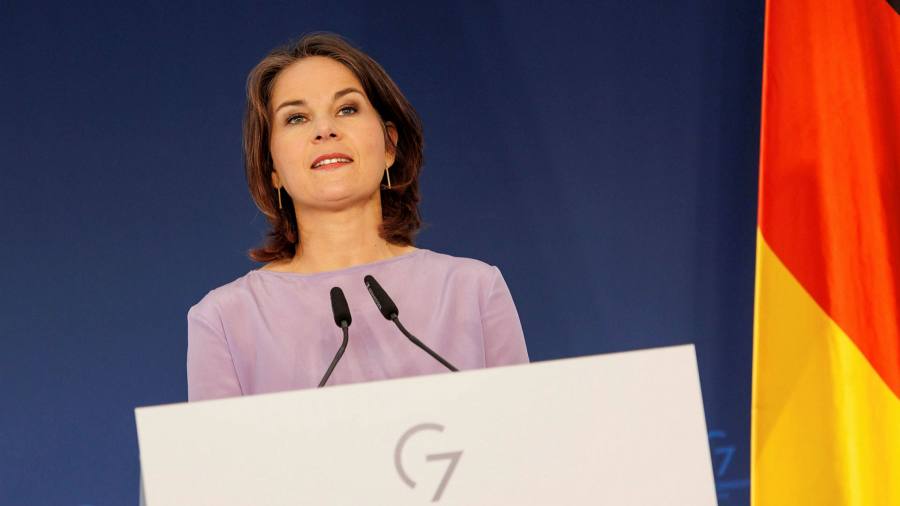 German foreign minister Annalena Baerbock said the G7 group of industrialised nations was urgently seeking alternative routes for the export of Ukrainian grain as Russia’s war against its western neighbour raised the risk of a global “hunger crisis”.

Speaking at the conclusion of a three-day meeting of G7 foreign ministers in Germany, Baerbock said some 25mn tonnes of grain were stuck in Ukrainian ports that were being blockaded by Russian forces — “grain that the world urgently needs”.

“Every tonne we can get out will help a bit to get to grips with this hunger crisis,” she said. “In the situation we’re in, every week counts.”

Wheat prices have been soaring in recent weeks over supply concerns caused by the Ukraine war, as well as a number of droughts around the world.

The US Department of Agriculture forecast that global supplies for the coming crop year would fall for the first time in four years.

Worries about the supply situation deepened on Saturday when India announced it was banning wheat exports, a move that is likely to push up food prices and fuel hunger in poor countries that rely on imports of Indian grain.

The government in New Delhi said the ban was designed to “manage the overall food security of the country”.

The issue of food emerged as one of the key issues in the G7 ministers’ weekend deliberations. Their final communique said Russia’s war had “generated one of the most severe food and energy crises in recent history, which now threatens those most vulnerable across the globe”.

It said the G7 was “determined to accelerate a co-ordinated multilateral response to preserve global food security and stand by our most vulnerable partners in this respect”.

Baerbock said the easiest way to resolve the food crisis would be for Russia to stop its combat operations and allow grain out of Ukrainian ports, a move that would help to “normalise global food prices”. But she said Russian president Vladimir Putin showed no inclination to do that.

Instead, western governments were looking at alternatives to the sea route. She said some 5-6mn tonnes of grain per month are normally exported via Ukraine’s ports and the G7 was “analysing different rail routes that will allow us to get the grain out as soon as possible”.

So far, she said, the Ukrainians had succeeded in transporting only a “fraction” of their grain harvest by rail, via Romania. “But the bottleneck there is due to the fact that Ukraine has a different track gauge [to Romania],” she said. “That’s the same for other connections too, for example, with Poland — freight cars can’t just pass through.”

She said the G7 ministers had also discussed using Baltic ports to export grain. “But you have to reach them first”. “There won’t be a perfect solution so long as the [Russian] bombardments are continuing,” she said.

In their communique, the G7 ministers expressed “deep concern” at the worsening state of food insecurity and malnutrition across the world, which had been exacerbated by the Covid-19 pandemic and the Russian war in Ukraine.

“Food prices and costs for humanitarian agencies to deliver assistance to those in greatest need are both rising, at a time when 45mn people are already one step away from famine,” it said.