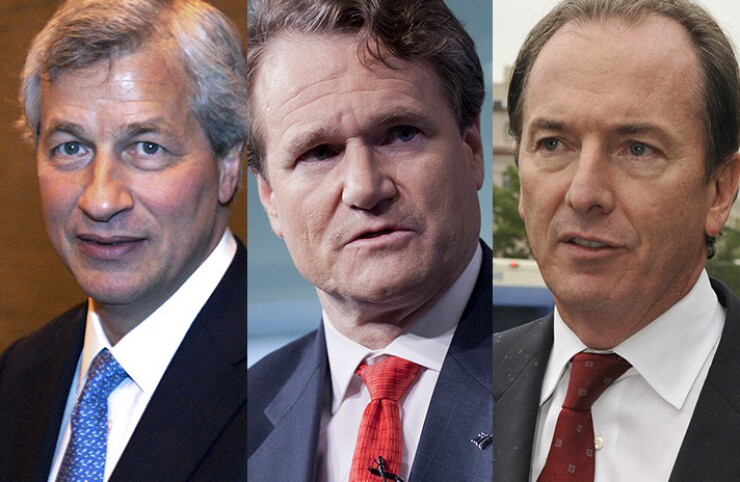 The CEOs of three large U.S. banks are raising concerns about a possible recession, saying the Federal Reserve has a tricky job ahead in combating inflation without sparking a downturn.

The Fed is “a little late” in raising rates in a bid to tamp down demand and tame inflation, Dimon told Bloomberg Television. But he also gave the central bank a reprieve by reminding that just two years ago, the U.S. unemployment rate nearly hit 15% and the lack of a COVID-19 vaccine clouded the ability for the economy to recover quickly.

“People should take a deep breath, give them a chance,” Dimon said, adding that the “sooner they move, the better.”

The comments came as Fed officials prepared to announce their latest actions to bring down inflation, which jumped by 8.5% in March compared with a year earlier.

The central bank is expected to raise its benchmark short-term interest rate by a half point, the largest single increase since 2000, and lay out a plan to reduce its $9 trillion balance sheet. Markets expect several more rate hikes this year.

Bank of America’s economists are more worried over the potential for the Fed to tip the economy into a recession, Moynihan told CBS Mornings.

“This is a tricky execution” for the Fed, Moynihan said, saying the big debate among economists is whether the Fed will execute “a hard landing, a soft landing [or] a bouncy landing.”

“That’s what the Fed is trying to get right. How do I guide this back to normal after all that stimulus, after all that activity, after the recovery?” Moynihan said.

At a Wall Street Journal event, Gorman said judging by past Fed rate-hike cycles, “it’s a 50-50 proposition” on whether the U.S. can avoid a recession. But like Dimon and Moynihan, Gorman touted the current strength of the U.S. economy and consumers.

Dimon said he still sees about a 33% chance of a “soft landing” and gave the same odds to the potential for a brief and mild recession. But there’s also a chance that a downturn is “going to be much harder than that,” he added, particularly with the potential for the war in Ukraine to drag on “for years” and continue rattling markets for energy, wheat and other commodities.

Florida Estate With A Putting Green Hits The Market For $16.35 Million
Should You Buy Biotech ETFs Now?
Pending home sales post surprise increase in May, likely due to brief pullback in mortgage rates
Must staking and liquidity pool lock-ups change to see crypto mass adoption?
Finland and Sweden poised to join Nato after Turkey drops veto