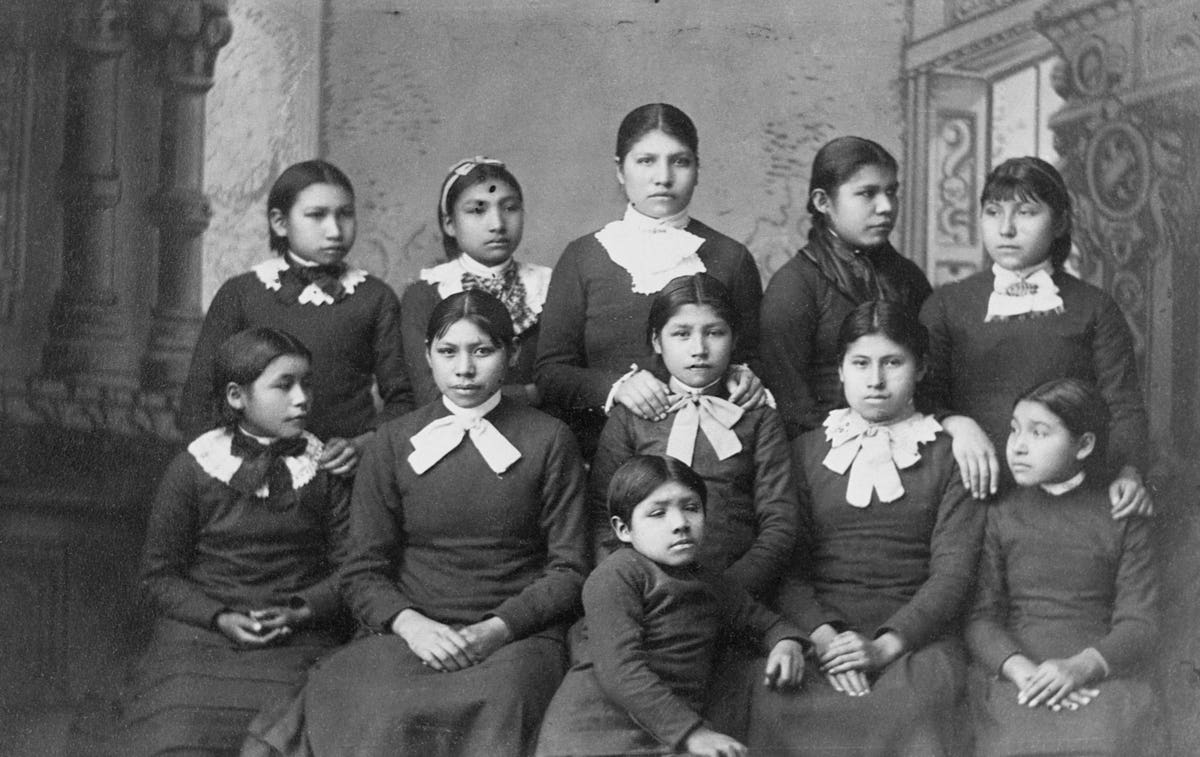 The residential schools established across North American to assimilate and Christianize the children of the native tribes are well-known for the terrible suffering they caused: earlier this month, Pope Francis issued a formal apology on behalf of the Roman Catholic Church to survivors and families impacted by Canadian residential schools.

These schools did not only exist in Canada; at one time, there were 367 such schools in 30 states of the United States. Government-supported, religiously-run schools were in large part Roman Catholic, but others had origins in denominations as diverse as Presbyterian, Episcopalian, Quaker, Methodist, Mennonite, Baptist and Seventh Day Adventist. Between 1869 and the 1960s, hundreds of thousands of Native American children were removed from their homes and families and placed in boarding schools operated by the federal government and the churches. Though we don’t know how many children were taken in total, by 1900 there were 20,000 children in Indian boarding schools, and by 1925 that number had more than tripled.

Most of these residential schools are gone, but in Nevada, the Stewart Indian School has survived to become a museum and a pilgrimage site.

“The primary intent of the museum is to allow residents a chance to heal,” says museum director Bobbi Rahder. “Opened in January 2020, this is now a gathering place for alumni and their families. We have had over 4,000 visitors.” She points out that this has been during a time when, due to Covid, few people traveled.

Opened in 1890, the Stewart Indian School was one of the many boarding schools designed to both educate and force a different culture upon Native Americans. At its peak, over 65 buildings were created to educate the children from Nevada’s Great Basin tribes, which includes the Washoe, Paiute and Shoshone. The school quickly grew to 200-400 students and, eventually, over 200 tribes attended over the 90 years of the school’s existence. It closed in 1980.

At the Stewart Indian School, as at all residential Indian schools, children were not permitted to speak their native languages. They were made to learn English as well as skills such as housekeeping and carpentry in an effort to eradicate Native American culture and assimilate Native Americans into American culture. They suffered physical, sexual, cultural and spiritual abuse and neglect, and experienced treatment that in many cases constituted torture for speaking their native languages. Many children never returned home and their fates have yet to be accounted for by the U.S. government.

“All the boarding schools had a cemetery,” Bobbi Rahder says. “We have several dozen unmarked graves. Some headstones simply say, ‘Girl – 5’ or ‘Boy – 8.’ Many families never learned what happened to their children.”

Nearly all of the buildings on the campus were built by students between 1923 and 1956; some Stewart students became stonemasons.

Now a historic site that contains a cultural center as well as a museum, the Stewart Indian School was named to Preserve Nevada’s 2021 list of the eleven most endangered places in the Silver State.

With help from state funds, progress has been substantial. However, more money is needed to renovate and preserve some of its historic buildings, including the bakery building/post office, gymnasium and auditorium.

“What people learn here is the true story of the boarding schools,” Bobbi Rahder says.

About 85 miles away, the Pyramid Lake Museum, headed up by Billie Jean Guerrero, tells the stories of the Paiute Tribe, whose children were among those forcibly taken to the Stewart Indian School.

“Our ancestors were mobile, and, in winter, moved to one of hundreds of caves around the area,” she says. “These caves are protected as cultural and sacred sites and are closed off to the general public.”

It is a beginning of the healing process, and attempt to honor the traditions the residential schools tried so hard to obliterate. Together with organizations like the National Native American Boarding School Healing Coalition, museums like this are beginning to examine the past.

“It’s a very complicated history and one that is not taught in schools,” says Bobbi Rahder. “Although we are working with the Nevada Department of Education to rectify that, at least here in Nevada. Also, we are trying to provide help for visiting Stewart alumni and family members regarding the historical trauma caused by the boarding school experience. We worked with a Walker River Tribal member, Arella Trustman, who recently received her Master’s Degree in Psychology and Historical Trauma from NYU. Arella worked at our museum as an intern and shared her research in the form of a handout that we share with families defining historical trauma, its symptoms, and where to get help here in Nevada to heal from this trauma. When we can gather people in groups again safely, we want to have healing circle talks here at the museum led by trained therapists like Arella.”

“Forced assimilation has been identified by the United Nations as genocide,” Bobbi says.

Hopefully, efforts like hers will lead to healing and recovery.