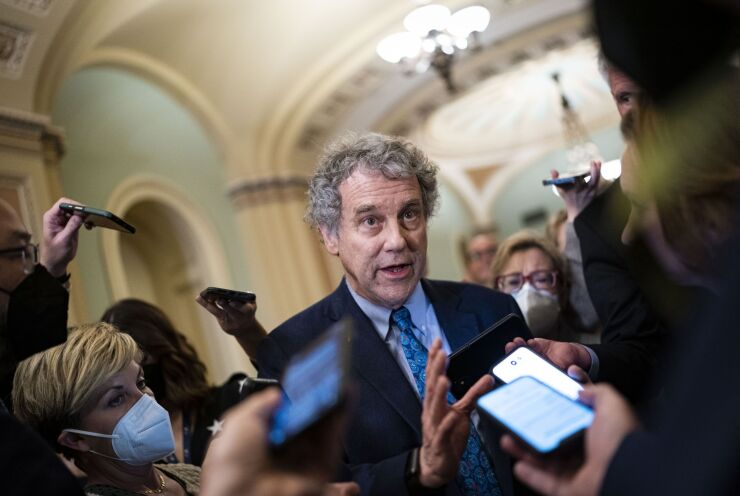 Senate Banking Committee Chairman Sherrod Brown said Wednesday that the Senate would wait to confirm President Biden’s Federal Reserve picks until the return of Democrats recovering from the coronavirus.

Brown, an Ohio Democrat, blocked votes this week on a second term for Jerome Powell as chair of the Federal Reserve and the nomination of Philip Jefferson to the Fed’s board of governors after top Banking Republican Pat Toomey of Pennsylvania refused on Tuesday to postpone a procedural vote on the nomination of Lisa Cook as a governor.

Brown said there is “no doubt” all three will eventually be confirmed.

He added that he had offered to allow votes on Powell and Jefferson, who have broad bipartisan support, if Toomey would have extended the courtesy of delaying the Cook vote until Democrats ill with COVID-19 could attend, “and not try and nick her and hit her like he’s done,” but Toomey refused.

“I just look at their pattern of behavior on these Fed noms,” he said, referring to Senate Republicans. “They’ve done all they can to criticize, undermine, to try to damage their reputations and it’s outrageous.”

Toomey said Tuesday that Democrats had refused to offer Republicans a similar courtesy when one of their senators was sick with COVID-19 and they were trying to confirm Judy Shelton to the Federal Reserve. He took umbrage at Brown’s suggestion that it might have something to do with Cook being a Black woman. Shelton was not confirmed.

“Naysayers,” Brown said in a speech Tuesday, “absurdly claim that Lisa Cook doesn’t meet the standards for this position, standards that seem to apply only to certain nominees who happen to be women, particularly Black women.”

Democrats this week are short the votes of Sens. Ron Wyden of Oregon and Connecticut’s Chris Murphy as well as the tiebreaking vote of Vice President Kamala Harris because of positive COVID-19 test results. All three would be needed to confirm Cook given uniform GOP opposition in the 50-50 Senate.

Sales of existing homes fell in May, and more declines are expected
How They Closed It: Closing The Loop On One Of Aspen’s Most Expensive Deals Ever
Blockchain isn’t as decentralized as you think: Defense agency report
11 U.S. cities will host soccer World Cup in 2026
Quarter-end buying may lift stocks higher before the next market storm