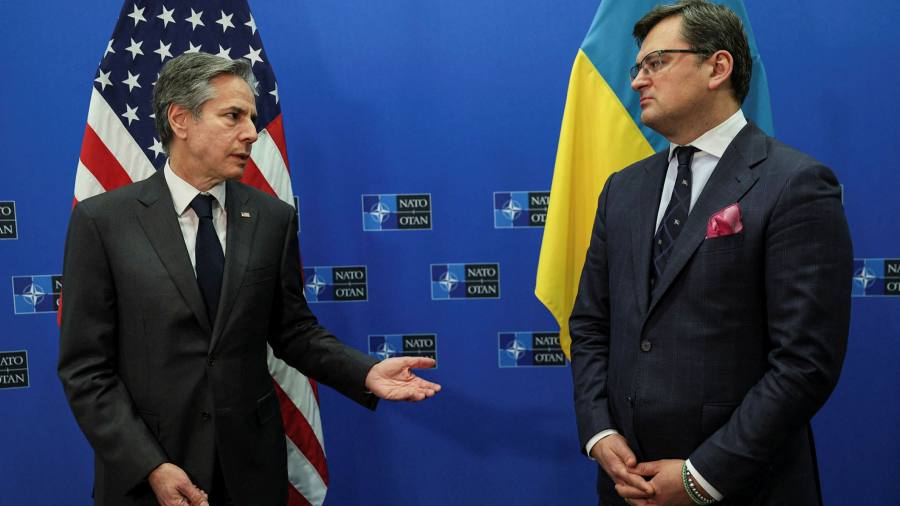 Nato member states have agreed to supply new types of advanced weaponry to Ukraine, alliance representatives have said, as Kyiv prepares for a fresh offensive by Russia in the country’s east.

The pledge came after a plea from Ukraine’s foreign minister for western countries to move faster with fresh supplies or instead see “many people die . . . because this help came too late”.

Six weeks since Vladimir Putin, Russia’s president, ordered the invasion of Ukraine, Moscow’s troops have largely withdrawn from territory north of Kyiv after failing to seize the capital but are regrouping and rearming ahead of an attempt to advance in the eastern Donbas region, Ukrainian and western officials say.

That has sparked demands from Kyiv for western countries to supply more heavy weapons, armour and more advanced systems. Ukraine’s foreign minister Dmytro Kuleba said he would use a Nato meeting in Brussels to ask for aircraft, missiles, armoured vehicles and heavy air defence systems, among others.

“There was support for countries to supply new and heavier equipment to Ukraine, so that they can respond to these new threats from Russia,” she said. “And we agreed to help Ukrainian forces move from their Soviet-era equipment to Nato standard equipment, on a bilateral basis.”

Antony Blinken, US secretary of state, said Washington was looking at sending “new systems” to Ukraine.

“We are not going to let anything stand in the way of getting Ukrainians what they need,” he said. “We are looking across the board right now, not only at what we have provided . . . [but] whether there are additional systems that would make a difference.”

The promise of more military aid came as Dmitry Peskov, Putin’s spokesperson, admitted Russia had suffered “significant losses of troops” during its invasion of Ukraine, which he described as “a huge tragedy for us”.

Peskov said Russia had withdrawn from Kyiv and Chernihiv in central Ukraine last week as a “goodwill act to lift tension from those regions and show Russia is really ready to create comfortable conditions to continue negotiations”. But fighting would continue in the Donbas, he added.

Nato member countries have supplied Ukraine with anti-tank missiles, drones and other defensive weaponry before and during the war. However, they have declined to supply other classes of weapons or impose a no-fly zone, as Kyiv has demanded, over the risk of engaging Russia in a wider war.

Kuleba said afterwards he was “cautiously optimistic” that alliance states would meet his demand but warned that delays would result in more deaths.

“Either you help us now, and I am speaking about days . . . or your help will come too late,” Kuleba said. “Many people will die . . . exactly because this help came too late.”

He added: “I was very specific about the requests and the timeline that they should be accommodated. I will be looking forward to the follow-up from allies.”

Ukraine has warned Russia is preparing a fresh offensive in the Donbas, aimed at seizing territory in the two administrative regions of Luhansk and Donetsk, which separatists have partially occupied since a Moscow-backed uprising in 2014.

Ukraine’s military authorities on Wednesday called on residents living in the regions to leave “while they still had the chance”.

Jens Stoltenberg, Nato’s secretary-general, said allies had agreed to “further strengthen” support for Ukraine immediately and in the “medium and long term”.

“It was a clear message from the meeting today that allies should do more and are ready to do more to supply more equipment. They realise and recognise the urgency,” he said.

Meanwhile, the UN’s general assembly on Thursday voted to suspend Russia from the Geneva-based Human Rights Council, in a new international rebuke to Moscow over the invasion of Ukraine and alleged atrocities.

However, 24 UN members, including China, Iran, Bolivia and Kazakhstan, voted against Russia’s suspension. Another 58 countries abstained, including India, Indonesia and Egypt, showing that a wide range of countries are either siding with Moscow or remaining neutral as the military conflict continues.