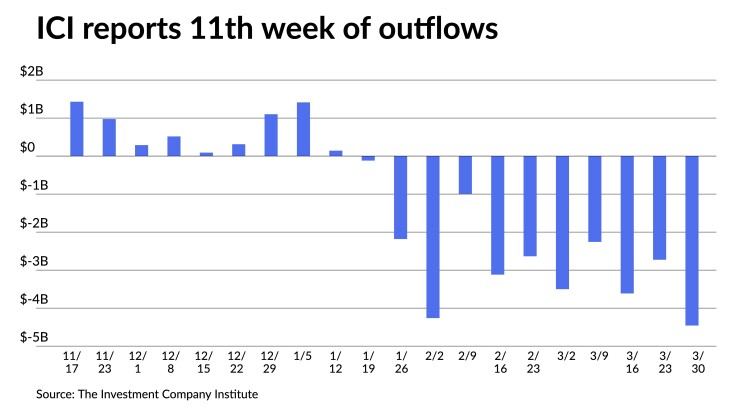 Municipals sold off Wednesday, with triple-A benchmarks being cut up to 12 basis points across the curve, while U.S. Treasuries strengthened on the front end but the long-bond hit year highs and equities ended in the red.

The Federal Open Market Committee meeting minutes show “the doves have left the building,” said Edward Moya, senior market analyst at OANDA, after the FOMC announced it expects a $95 billion per month balance sheet reduction, with analysts forecasting announcement and reduction beginning in May. “The Fed is worried about inflation spreading and that suggests they will remain aggressive a while longer even when growth concerns start to emerge later in the year.”

Parts of the UST curve remained inverted as the three-, five- and seven-year UST were still sitting above the 10- and 30-year, but the 30-year hit its highest in a year at 2.611%.

Exchange-traded funds saw inflows at $750 million versus $237 million of inflows the week prior.

The market has been shaken back to reality Tuesday and Wednesday after a few days of mostly stable levels, Kim Olsan, senior vice president of municipal bond trading at FHN Financial.

She said the outsized calendar is contributing to the weaker tone, as large-scale deals provide one set of distractions, while deals in the sub-$100 million range help to further deflect attention.

There were more than 30 individual issuers pricing offerings above $50 million par value this week alone. Not only is the increased volume widening spreads, but the rate-risk overhang is causing more problems with 4%- and 5%-only structures as buyers seek to protect against inflation, she said.

A minor pullback in forward supply predictions in the coming 30 days implies that the additional concession currently available may evaporate to some amount. Bond Buyer 30-day visible supply sits at $11.74 billion.

In other words, the munis-on-sale theme is an excellent entry point, according to Olsan.

FOMC minutes
Balance sheet runoff will be faster than the last time, with officials comfortable with monthly caps for reduction of about $60 billion of Treasuries and $35 billion for agency mortgage-backeds, according to the minutes of the March 15-16 Federal Open Market Committee meeting.

The minutes said officials “generally agreed” on those caps, which could be “phased in over a period of three months or modestly longer if market conditions warrant.”

While it was clear the Fed was preparing the markets for balance sheet runoff, OANDA’s Moya said, “expectations were for the pace to be around $100 billion, so the $95 billion amount was initially viewed as dovish.”

But, for traders, Moya added, the concern is the minutes suggest an increased risk “the Fed could remain vigilant in fighting.”

When concerns about growth “emerge in the middle of the year,” he said, no one knows if the Fed will back off on rate hikes.

The minutes also suggested more support from the panel for a 50-basis-point rate hike in March, although the uncertainty caused by Russia’s invasion of Ukraine caused them to find the quarter-point liftoff “appropriate” for that meeting. However, they expect “one or more 50 basis point increases in the target range could be appropriate at future meetings, particularly if inflation pressures remained elevated or intensified.”

“In the UST portfolio, notes and bonds will be allowed to roll off first and only then, if there is still room under the cap, bills will be allowed to roll off,” said Chris Low, chief economist at FHN Financial. “This will effectively reduce duration and it will mean the portfolio will shrink faster, because there will be more bills to let go during months with fewer coupon holdings.”

The FOMC, he predicts, will announce the exact plan at the conclusion of its May meeting and implement it on May 15.

“There is clearly growing concern at the Fed that they have fallen too far behind the curve on guarding their inflation mandate,” said Scott Anderson, chief economist at Bank of the West. “So, in response, they are open to both outsized 50 basis point fed funds interest rate hikes in tandem with a rapid draining of reserves as they wind down their balance sheet assets at an aggressive pace.”

And while they’re talking the talk, he said, the Fed “will soon need to match their hawkish rhetoric with hawkish monetary tightening to bring inflation back under control.”

Morgan Stanley Research saw “a few important surprises” in the minutes, including the size of the runoff, which they expected would top out at $80 billion a month. They expect a May announcement. But while MBS sales were discussed, Morgan Stanley said, “We still think MBS sales are unlikely in 2022, and unlikely in 2023 as well, but could come into play to reduce residual holdings much further in the process and at the earliest look for them to start the conversation a year from now.”

Policymakers appeared “substantially” more concerned with upside risks to inflation than risks to growth, they said.

In the primary:
Citigroup Global Markets priced for the cities of Dallas and Fort Worth, Texas, (A1/A+/A+/AA/) $1.188 billion of taxable Dallas Fort Worth International Airport joint revenue improvement bonds, Series 2022A. All bonds are priced at par: bonds in 2051 at 4.087% and at 4.507%.