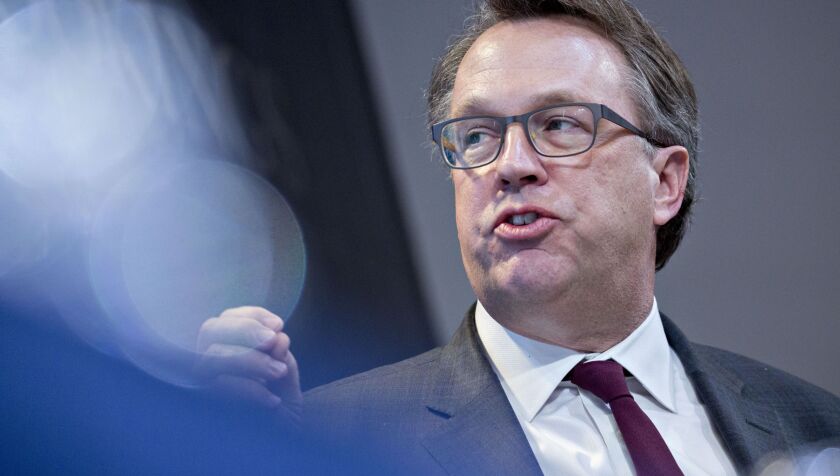 COVID-19 has changed the economic as well the physical landscape of living and working in New York City, according to panelists at an symposium hosted by the Federal Reserve Bank of New York, but the city will survive and thrive.

“The Future of New York City: Charting an Equitable Recovery for All,” was a day-long hybrid in-person and remote conference Thursday that covered topics such as the future of remote work, what will cities be like in a post-pandemic economy and the role of infrastructure and transportation in an urban setting.

John Williams, president of the New York Fed, noted in his welcoming address the city was the initial U.S. epicenter of the coronavirus pandemic, with the virus spreading rapidly and leading to widespread hospitalizations and a high death toll.

New York has seen 2.3 million COVID cases since the start of the pandemic, with more than 40,000 deaths reported.

“During the initial months of the pandemic, one out of five jobs in the city disappeared. In the restaurant industry in particular, 70% of jobs were lost,” Williams said. “Other industries, such as retail and even health care, experienced outsized losses as well.”.

“Two years later, we’ve seen great progress toward a recovery. The most recent data show that well over two-thirds of New York City’s job losses have been reversed. Still, areas of the New York City economy, especially those dependent on visitors and office workers, continue to struggle and are lagging the nation in recovery.”

Despite the current challenges, he noted, cause for optimism exists.

“Now that our focus is on the recovery, we must create an equitable future for all residents of this city. We must make sure that all of the people who live, work, or own a business here have a chance to succeed,” Williams said. “It is essential that we build a stronger foundation so that everyone can fulfill their economic potential, both here in New York and around the nation.”

One of the major changes since the height of the pandemic in 2020 is the rise in those employees who work from home or work remotely.

Most panelists believed a hybrid system of three-two (working in the office three days and working from home two days) was a likely permanent outcome after the pandemic.

A hybrid work from home scenario is creating a “donut effect” where employees are moving to the suburbs, noted Stanford University Professor of Economics Nicholas Bloom. As a result, commercial real estate and retail in the city’s center is softening, he said.

“I think the big issue for me is public finance,” Bloom added. “You see tax revenues down, public transport revenues down — how do you address that?”

Employees place value on a hybrid working schedule, seeing it as almost an 8% pay increase, he said.

Bloom said retail expenditures and tax revenue were also concerns. “We surveyed people for several months at the beginning of the pandemic and asked them how much they spent on around work, eating out shopping and food and drink and then pro-rated that data and we suggest it’s about $6,000 less expenditures per person.”

However, he said, the city still has a bright future, but perhaps a bit less bright than in pre-COVID times.

“I think the city itself is in reasonably good shape,” Bloom said, “I don’t think it’s cataclysmic — I think New York is going to see a softening. I think it’s taking it back five or 10 years in terms of activity, but it’s definitely not cataclysmic.”

The city is one of the biggest issuers of municipal bonds in the nation. In the first quarter of fiscal 2022, it had about $38.13 billion of general obligation bonds outstanding. That doesn’t include various agency debt, such as the Transitional Finance Authority or the Municipal Water Finance Authority, which have $42 billion and $31 billion outstanding, respectively.

Currently, both the city and the state are working on fiscal 2023 budgets.

Some people have been saying they want to live in New York City, but with rents and home prices still going up, they don’t want to work in Manhattan anymore, said panel moderator Lauren Weber, a reporter for the Wall Street Journal.

The city is in a unique position when it comes to work from home, she noted. Manhattan is home to almost 11% of all office inventory in the United States as of 2021; the office sector in 2019 employed 1.6 million people, which is one-third of all New York City jobs; and contributed two-thirds of the city’s gross domestic product.

Manhattan has a daytime workforce which is larger than the population of Houston, Texas, and 70% of its workforce commutes in from other parts of the city or the suburbs.

“New York City subways are certainly struggling in winning back ridership,” Heil said. “But if we’re now thinking about how infrastructure is provided and how it’s being utilized, even pre-pandemic some of the usage was tremendously peaked — so having been with the Port Authority for 10 years if I just use the PATH system as a representation of a commuter rail system that brings people from New Jersey into New York City, the ratio of peak versus off-peak was eight to one.”

But now, when the transit system is looking at ramping back up, he said, if everybody stays home on Monday and Friday, the question will be what will this will mean for the infrastructure and services and how the system will be able to best provide an experience that will lure back commuters.

Future Forum, a research consortium, surveyed thousands of workers and managers globally, asking them a series of questions related to productivity and preferred ways of working.

Globally, 84% of men work in the office all or some of the time, compared to 79% of women. And 75% of working parents work remotely or hybrid, compared to 63% of non-parents.

The topic of out-migration was also touched upon.

“Over the past 20 years, there has been a move from colder cities to warmer cities,” said Harvard University Professor of Economics Edward Glaeser. “They are places of consumption rather than places of production. As workers get more footloose, that only becomes easier. When I think about say a mythical tech company made up of 15 go-getters who want to make the 21st century economy — do I think they will give up their office and stay at home for the next five years — not on your life. But will they rethink about going to Austin, Texas, if they don’t want to pay taxes, or going to Honolulu or Vail, you bet they will.”

Some, however, felt it was too early to tell if a hybrid system would become the norm and said perhaps a return to the office would be in the cards.

Many of the assumptions about the future of remote work are still uncertain, she said, and it is the wrong time to be drawing long-term conclusions. Wylde said the big takeaway for employers in the city is not to make big, permanent decisions right now while things are still in flux.

“We just surveyed about 10,000 office workers about what their feelings were about the city, the status of coming back to work,” she said. “Eighty-two percent said they would be watching carefully what happens in the city in the next year and making decisions about both their work and where they’re going to live.”

Marc Morial, president and CEO of the National Urban League, agreed is is too early to draw long-term conclusions about work from home because the city is just easing out of the pandemic.

As an employer, he said he wants his most of his 110 workers to be in the office in the financial district — at least most of the time.

He said he polled his employees about whether they wanted to work from home or to come back to the office — working from home won, but he vetoed that idea.

“But I said, ‘No, we’re coming back.’ So now we’re coming back to the office three days a week and doing two days from home,” he said. “Because from my perspective, I see all the dropped balls when working from home. I see the diminution in collaboration and conversation. I see the difficulty in on-boarding new employees.”

New York City is unique because the cultural attractions, the restaurants and the theaters and the music that the city has can’t be replicated in the suburbs or in the exurbs, the prosperous areas beyond the suburbs.

“So if people decide that they want to live in an exurb or a suburb, they are trading off some things for other things,” he said.

Looking ahead, Wylde said the biggest challenge is the relocation of offices following workers that have moved elsewhere, particularly to Florida.

“That’s what we’re nervous about because it affects out tax rolls and a lot of things in the economy of the city,” she said.