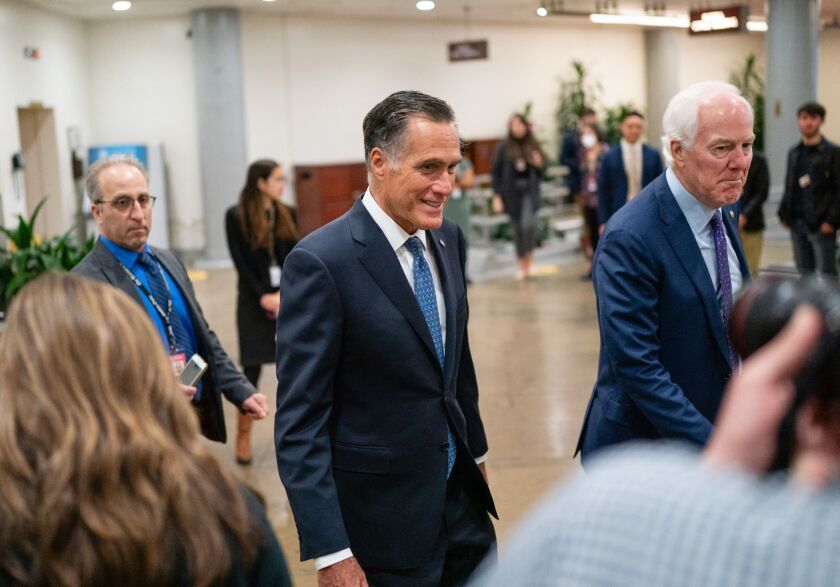 The Senate Thursday was close to a deal for a $10 billion COVID bill that appears to avoid a claw back of unspent pandemic funds sent to the states last year.

Utah Republican Sen. Mitt Romney, the chief Republican negotiator, said Thursday that the bill relies on unspent dollars in the $1.9 trillion American Rescue Plan Act. The bulk of the state portion appears to be preserved, though the final picture remained unclear as of Thursday afternoon.

The $10 billion legislation was “skinnied down” from an original $15.6 billion version, Senate Minority Leader Mitch McConnell said Thursday morning. Negotiators dropped money for international vaccine program, a cut that prompted some Democrats to warn they won’t vote for the bill.

Romney said a vote is possible next week — ahead of the scheduled April 8 recess — and that the bill first needs to be scored by the Congressional Budget Office.

Senate Majority Leader Chuck Schumer canceled a Thursday afternoon vote to begin debate on the bill and later told reporters that a deal appears close but the measure still needs work. “We would like considerably more money than our Republican colleagues, but we need to reach 60 votes,” the New York Democrat said.

The legislation is an effort to replenish funds for a variety of federal pandemic-related needs like therapeutics, testing and vaccines.

The Senate negotiations are part of a larger debate over how — and how fast — states and local governments are spending the pandemic relief that Congress sent them in 2020 and 2021.

“The Republicans are saying you’re not spending it fast enough, we need to claw it back,” said Emily Brock, lobbyist for the Government Finance Officers Association. “The threat from the Democratic side is, we’re short of cash, we have a lot of initiatives we need to achieve and where can we find that cash,” she said. “That in and of itself is something we all need to be watchful for.”

States are slated to receive $195.3 billion, which they’re required to obligate by 2024 and spend by 2026. Roughly $126 billion of the $200 billion in ARPA funds have been allocated, according to the National Council of State Legislatures.

In early March, House Speaker Nancy Pelosi was pushing to pass a $15.6 billion COVID relief bill as part of the FY22 omnibus legislation. Democratic governors and lawmakers mounted a successful challenge when they realized the COVID relief depended on clawing back around $8 billion of unspent state ARPA funds. Pelosi dropped the COVID provisions from the omnibus.

That may include money that would have gone to states for local business grants, Romney was quoted as saying. Sen. Roy Blount, R- Mo., said an additional offset of $2.2 billion would come from ARPA funds allocated for concert venues and theaters that were forced to close during the pandemic. Another $2 billion could come from aviation manufacturing account, Blount said.

The claw back would have affected at least 30 states that opted to take their ARPA funds in two tranches instead of all up front, as some states did. The second tranche is expected to begin to flow in May.

Even if Congress attempted to take the money back, it wouldn’t be simple, said Susan Parnas Frederick, Senior Federal Affairs Counsel for the National Conference of State Legislatures.

“It’s not clear cut; you can’t just say we’re going to take away X number of dollars,” Frederick said. “If you’ve allocated the funding, you’ve made a promise at the state level, and taking it back I think would just cause havoc.”

The longer the Congressional debate goes on, the more beneficial it is for states, Frederick added.

“The states are in session right now and working on their budgets and the more time that goes by, the more time states have to allocate that funding,” she said.

The proposed claw back targeted only state funds but local officials are also closely watching the debate.

“Any decline or claw-back of federal aid that has already been announced and awarded to states and localities would harmfully shock municipal budgets, unnecessarily upend local recovery plans in thousands of communities, and erode trust between federal, state, and local governments,” said Mike Wallace, the National League of Cities’ Legislative director for housing, community, and economic development. “It’s difficult to see how any of those outcomes would serve public health or the nation’s economic recovery. The National League of Cities is deeply grateful to members of Congress who stand firm against any proposal to take back federal investments from communities in need.”

Some Democratic lawmakers weighed in Thursday saying they would oppose any bill that doesn’t include additional money for an international vaccine effort.

“Hearing that critical global vax funding may be taken out of the COVID bill in the Senate. If the Senate does this, I am concerned many others and I may not be able to support the bill,” tweeted Illinois Democrat Rep. Raja Krishnamoorthi.