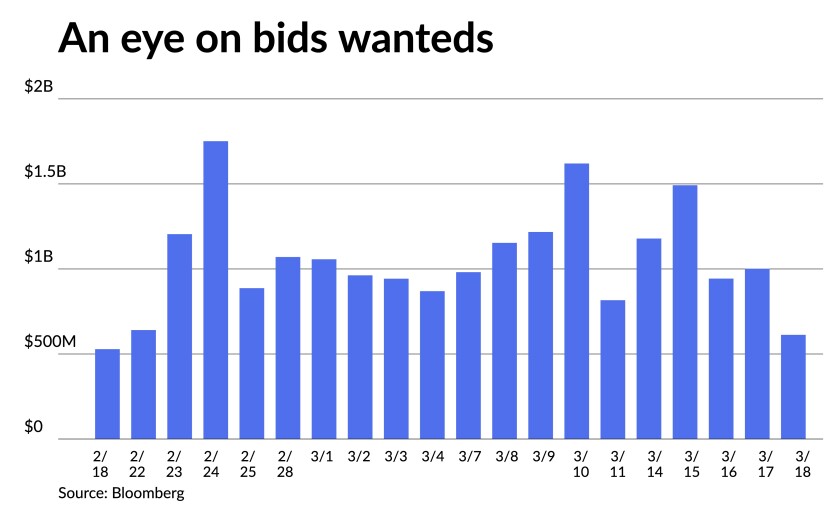 Municipals were steady to weaker in spots Monday, while U.S. Treasuries sold off amid Federal Reserve Board Chairman Jerome Powell warning about widespread inflation and talks over hiking interest rates quicker than the Fed initially planned last week.

Given macroeconomic events, still-rising inflation, and now a return of COVID-19 in many areas of the world, the natural inclination is for credit spreads to widen. While this is happening in corporate bonds, municipal bonds aren’t seeing the same credit stress, said Eric Kazatsky, head of municipal strategy at Bloomberg Intelligence.

Muni performance has been strong as of late and spreads have actually corrected after a month of gradual widening, according to Kazatsky. The Bloomberg Municipal High-Yield Index’s option-adjusted spreads fell 6 basis points to their lowest level since late February.

When looking at the Van Eck High-Yield Muni ETF’s NAV, he said, high-yield municipal valuation attitude has flipped, with buyers now willing to pay a premium after the ETF was trading at a discount to NAV for all of 2022. Over the past week, fund flows have also been positive.

“For munis, the hope is that positive energy is a self-fulfilling prophecy that will, in turn, lead to a reversal of fund-flow direction,” he said. “In many ways, the technical set-up and market tone feel similar to 2013, when both flows and returns were persistently negative.”

Taxable muni spreads have widened slightly in recent weeks, but not nearly as much as during the COVID-19 crisis, indicating that taxable investors are not panicking and municipal credit is still in good condition, especially for lower-rated names, according to Barclays PLC.

Barclays strategists Mikhail Foux, Clare Pickering and Mayur Patel said when low-rated taxable municipals are compared to corporates, however, a different picture emerges. Triple-B corporates have been subjected to far more pressure than municipals, and the yield differential between corporates and munis has reached new highs.

They said triple-B corporates have rebounded marginally, narrowing the gap slightly, although it remains large. Overall, Barclays strategists said this appears to be a message that investors should be cautious for the time being, particularly with lower-rated taxable credits, until corporates show indications of stabilization.

Additionally, the fourth quarter of 2021 followed the same pattern as the preceding quarters. Direct retail investors reduced their exposure, but banks and mutual funds stepped in to fill the void. Other investor groups’ municipal holdings have remained mostly unchanged.

Direct retail reduced its muni exposure by $125 billion over the course of the year, while mutual funds raised their holdings by almost $120 billion (with about $20 billion migrating into ETFs). Meanwhile, banks added close to $35 billion, and dealers gained $5 billion. The market’s overall size has grown by $60 billion to $4.05 trillion in 2021, said Barclays strategists.

Taming inflation
It may take three years for inflation to decline to the Federal Reserve’s 2% target, but Fed Chair Jerome Powell is confident a soft-landing is possible and is committed to price stability even if it means raising rates faster than planned.

“There is an obvious need to move expeditiously to return the stance of monetary policy to a more neutral level, and then to move to more restrictive levels if that is what is required to restore price stability,” he told the National Association for Business Economics, according to prepared text released by the Fed. “We are committed to restoring price stability while preserving a strong labor market.”

“Forecasters widely underestimated the severity and persistence of supply-side frictions, which, when combined with strong demand, especially for durable goods, produced surprisingly high inflation,” Powell said. “The pandemic and the associated shutdown and reopening of the economy caused a serious upheaval in many parts of the economy, snarling supply chains, constraining labor supply, and creating a major boom in demand for goods and a bust in services demand.”

And the expectations that inflation would decline in the last half of 2021 never came to fruition, he said. “Part of the reason may be that, contrary to expectations, COVID has not gone away with the arrival of vaccines,” Powell noted. “In fact, we are now headed once again into more COVID-related supply disruptions from China. It continues to seem likely that hoped-for supply-side healing will come over time as the world ultimately settles into some new normal, but the timing and scope of that relief are highly uncertain. In the meantime, as we set policy, we will be looking to actual progress on these issues and not assuming significant near-term supply-side relief.”

Powell said the Fed’s moves “will help bring inflation down near 2% over the next 3 years” and that a soft landing is possible.

“Soft, or at least soft-ish, landings have been relatively common in U.S. monetary history,” he said. The Fed engineered soft landings in 1965, 1984, and 1994, Powell said. “In other cases, recessions chronologically followed the conclusion of a tightening cycle, but the recessions were not apparently due to excessive tightening of monetary policy.”

The latest recession was caused by the pandemic, not Fed tightening, he added.

But the Russian invasion of Ukraine adds a wrinkle, Powell said. “The added near-term upward pressure from the invasion of Ukraine on inflation from energy, food, and other commodities comes at a time of already too high inflation. In normal times, when employment and inflation are close to our objectives, monetary policy would look through a brief burst of inflation associated with commodity price shocks. However, the risk is rising that an extended period of high inflation could push longer-term expectations uncomfortably higher, which underscores the need for the Committee to move expeditiously as I have described.”

“Obviously, the baseline for inflation has moved up significantly,” he told the National Association for Business Economics. “My original outlook was that inflation would likely begin decelerating this spring. That almost certainly won’t happen now. Let me say clearly that getting the high rates of inflation under control is the top concern for me for 2022.”

Uncertainty is elevated, Bostic noted, which has “tempered my confidence that an extremely aggressive rate path is appropriate today. Events are shifting rapidly, and we could see marked changes along key dimensions, such as aggregate demand, that could warrant quickly adjusting the trajectory of policy.”

Both Fed officials left open the possibility of faster or slower rate hikes, depending on the economy.

But, Matt Dines, chief investment officer and co-founder of Build Asset Management, said the Fed last week may have hinted at a “Fed put” — “an acknowledgment that there’s an event on the horizon that will require an easing of financial cycles.”

The Fed’s success in taming inflation, he said, “will depend on whether policy makers have correctly identified the root cause. Over the quarters ahead, markets and the economy are about to find out whether the surging price levels in the economy are in fact monetary in nature (which the Fed can actually address through tightening financial conditions) or something else, such as supply chain disruptions, global trade-related issues, or resource and input constraints.”

The Summary of Economic Projections suggests a median fed funds rate of 2.75% in 2024 but a long-term 2.375% level. Dines said, this is “the first appearance of an inversion in the FOMC’s guidance curve for the fed funds rate since December 2018.”

The implication, he said, is the Fed “will over-hike and then eventually cut.” Although, Dines noted, it’s unclear what will cause the Fed to cut rates or when after 2024 it will happens. The market agrees with this scenario, he said, but not the timing. The markets expect a rate cut in 2023 or 2024.

“What this suggests is that the money managers in the global credit markets see this hike cycle peaking in short-term through their foggy crystal ball, just as it’s already getting started,” Dines said. “The Fed now implicitly acknowledges this, but says these events are further out.”

The market saw the dot plot “as evidence they’ll get what they want: the next time turmoil hits financial markets and the broader economy, the Fed put will be there.”

The Regents of the University of Michigan (Aaa/AAA//) is on the day-to-day calendar with $582.740 million of taxable general revenue bonds, Series 2022C. Goldman Sachs & Co.

How They Closed It: Closing The Loop On One Of Aspen’s Most Expensive Deals Ever
Quiet start to week as large new-issues in the queue
American Securities Association to SEC: Do not shorten trade reporting window
Florida Estate With A Putting Green Hits The Market For $16.35 Million
Mining Ban Sparks Negative Reactions From Iran’s Crypto Community