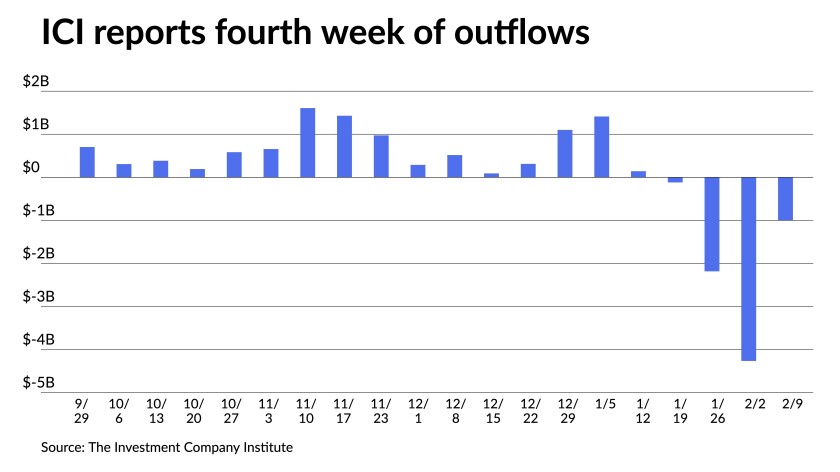 Triple-A benchmark yields were little changed for the first session in a week, as U.S. Treasuries were flat and equities were also little moved in either direction as all markets seemed to take a mid-week break from the volatility.

ICI also said exchange-traded funds saw inflows at $701 million in the week ending Feb. 9 after $13 million of outflows the week prior.

There have been 33 trading sessions so far this year and the 10-year AAA Refinitiv MMD benchmark has posted a daily improvement in just three of those days, noted Kim Olsan, senior vice president at FHN Financial. The yield opened 2022 at 1.04% and is now 1.71%, a move representing 64% of its 2022 low.

“While that dramatic a change in such a short time has typically been credit-related, this time the change is more due to macro events,” she said. “Just where the selloff stabilizes and finds a better equilibrium isn’t known yet, but better vantage points for buyers have mostly certainly developed.”

The negative correction in municipal bond prices over the past week and a half has municipals in the red.

“Muni trading liquidity remains at issue, with strong volatility creating uncertainty about price discovery and putting some distance between bids and covers,” said Matt Fabian, a partner at Municipal Market Analytics in a weekly Outlook report. ,

Net buying pressure has increased, with demand focused at the front end of the curve, where nominal yields are high enough to warrant acquisitions by both separately managed accounts and formerly fee-constrained traditional high-grade managers, he said.

“But while buyers are emerging, sporadically, up front, lower demand at the long end reflects the threat of de minimus-related price cuts amid the prevalence of lower coupon, more aggressive structured issued in the last two years,” he said. “While the Fed is raising rates and longer Treasuries remain unsteady, this will be a difficult area to stabilize prior to de minimus losses occurring.”

Olsan also noted that short maturities are faring better based on a flight-to-option trade, “riding out 1-2 year durations while the Fed is in tightening mode.”

FOMC minutes
Rates could go up faster than they did in 2015 if predictions for the economy hold, according to minutes of the Federal Open Market Committee, but the release offered no hints as to whether a 50-basis point liftoff would be considered.

The markets have priced in a March rate hike, with a 50% chance of a 50-basis-point move instead of 25 basis points.

“Participants viewed that there was a much stronger outlook for growth in economic activity, substantially higher inflation, and a notably tighter labor market,” the minutes of the Jan. 25-26 meeting noted. “Consequently, most participants suggested that a faster pace of increases in the target range for the federal funds rate than in the post-2015 period would likely be warranted, should the economy evolve generally in line with the Committee’s expectation.”

Rate hikes will be assessed on a meeting-by-meeting basis based “on economic and financial developments and their implications for the outlook and the risks around the outlook,” the minutes said.

And, should inflation remain elevated, the minutes said, most participants think it appropriate “to remove policy accommodation at a faster pace than they currently anticipate.”

In order to prevent “the risk that financial conditions might tighten unduly in response to a rapid removal of policy accommodation,” some officials suggested “clear and effective communication of the Committee’s assessments of the economic outlook, the risks around the outlook, and the appropriate path for monetary policy.”

“The FOMC minutes did not offer much more after the hawkish pivot already delivered at the January meeting,” said Jason England, global bonds portfolio manager at Janus Henderson Investors. “We have reached peak uncertainty for monetary policy.”

While the minutes make clear rates will go up in March, “there was no discussion around a 50 bp hike that many have priced into the market, so although it may still be on the table, that is not our base case,” he said.

Similarly, the only guidance on balance sheet runoff was: it “will likely be quicker this time than after the last crisis,” England said. “Bottom line is that for a market that has shifted more hawkish, these minutes will come off dovish, however remember we have seen a strong January jobs report and a headline CPI print of 7.5% since the January meeting so a data dependent Fed will continue to incorporate these into their outlook as well as another jobs report, PCE print, and CPI print prior to the March meeting.”

“Shortages and the pace with which people can get what they want are playing a larger role than weak demand in determining retail sales,” said Grant Thornton Chief Economist Diane Swonk. “This is showing up as upward pressure on a broadening spectrum of prices and has left the Federal Reserve playing catch up with rate hikes.”

A 50-basis point liftoff “is all but a formality,” she said. “The next step is when and how fast the Federal Reserve plans to let its bloated balance sheet shrink; that is more complicated and will be hotly debated at the March meeting.”

The 3.8% jump in January sales topped economists polled by IFR Markets’ expectations of a 1.8% rise.

“Since spending cannot forever outpace inflation, some special factors are at play,” according to Wells Fargo Securities Senior Economist Tim Quinlan and Economist Shannon Seery. “We suspect it may have to do with certain merchandise finally becoming available.”

They noted large gains at car dealers and furniture stores, “where inventory has been severely disrupted by a lack of supply. Some of the major gains in sales were thus made possible by people finally getting their hands on stuff they couldn’t before.”

However, respondents expect conditions to improve in the next six months.