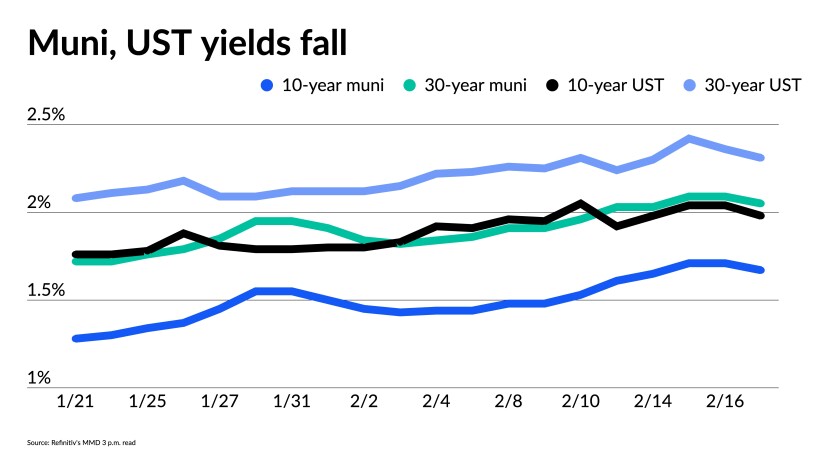 Municipals were stronger on Thursday with yields falling for the first time since Feb. 3 on triple-A yield curves, but underperforming an improved U.S. Treasury market in a flight-to-safety bid while Refinitiv Lipper reported $1.3 billion of outflows from mutual funds.

Triple-A benchmark yields fell one to four basis points, with the larger bumps outside of four years. Trading was stronger out of the gates with bellwether names, such as Georgia, Montgomery County, Maryland and Washington State, seeing better clearing levels.

Muni investors are considering the impact of rising yields on the asset class as the Fed continues to signal its plan to hike rates considerably this year, according to Morgan Stanley strategists.

“This means accounting for some muni-specific risks that could amplify price downside: negative convexity as bonds shift from pricing to the call to pricing to maturity and the tax impact of the de minimis rule on bonds trading at too deep a discount to par,” they said.

They said the good news is that before these muni-specific concerns saturate the market, the yield curve must undergo a far greater rate hike than certain forecasts, such as 10-year USTs climbing to 2.30% by year-end.

Negative price convexity from extension and de minimis risks are key reasons why munis could underperform fixed-income alternatives — such as the largely non-callable investment grade corporate bond market, —on rising rates, given that about 70% of munis have a call option and 90% of those are currently pricing to the call, they said.

However, Morgan Stanley analysts said rates will need to increase another 60 to 100 basis points before these variables become a widespread threat to the market.

“Furthermore, given our base case that 10-year USTs yields only rise 30 basis points from here, we see the most likely outcome as these special risks being relegated to smaller pockets of the market in 2022,” they said.

Even if there are no dangers particular to munis, muni investors should have a portfolio plan that prepares for increasing rates. Rising rates are, by definition, negative for prices. In a rising-rate environment, investor demand is also in danger, they said.

The four-week moving average fell to negative $1.354 billion from negative $1.090 million in the previous week.

Treasuries were better while equities sold off.

Economy
Inflation concerns continue, while a read of manufacturing showed some slowing with prices still elevated, and initial claims for unemployment unexpectedly rose in the week.

Economic growth slowed in February, according to the Federal Reserve Bank of Philadelphia’s manufacturing index, and while prices paid eased slightly, but remained elevated, the prices received index rose. “More than 54% of the firms reported increases in prices of their own manufactured goods, while 4% reported decreases,” according to the survey.

Respondents expect to raise prices 5.0% in the next 12 months, down from 5.3% in November when manufacturers were last queried. The firms upped expectations for wage hikes to 5.0% from 4.8% in November, while they still expect inflation to run 5.0% in the year.

Separately, few homes were started in January: 1.638 million compared to 1.708 million in December, while building permits rose to 1.899 million from 1.885 million.

But higher mortgage rates should cut demand for single-family homes, she said, “but long backlogs should blunt the blow of higher rates to construction activity. That, ironically, makes the Federal Reserve’s job of cooling inflationary pressures even harder in the near-term.”

“Inflation, the pandemic and geopolitical concerns still have some plot twists yet to be resolved, underscoring the high level of economic uncertainty currently prevailing,” said Mark Hamrick, senior economic analyst at Bankrate. “There’s a bit of fog” around the numbers, which climbed for the first time in four weeks.

And while the increase was not expected, he said, one week’s data doesn’t make a trend. Also, Hamrick noted, the continuing claims number declined.

The average seven-day simple yield for the 148 tax-free and municipal money-market funds remained at 0.01%.

Taxable money-fund assets lost $53.21 billion, bringing total net assets to $4.405 trillion in the week ended Feb. 7. The average seven-day simple yield for the 776 taxable reporting funds increased to 0.02% from 0.01% a week prior.